Parks officials say they’re forming a working group to collaborate with local moms who want to have a say in the design of new playground equipment coming to Mead Park. 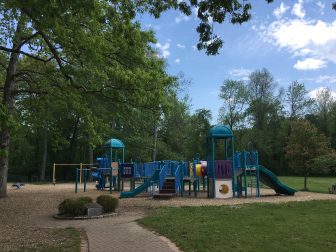 The town for fiscal year starting July 1 approved $190,000 to upgrade and replace some of the 20-year-old play structures (see page 42 here), and the moms are “very concerned and anxious” to help with how it’s redone, Parks & Recreation Commission Chair Sally Campbell said at the group’s most recent meeting.

“They do not want to redo the playground—they want to help with the design of it, help improve the area around it,” Campbell said at the meeting, held May 10 at Lapham Community Center. “They are looking to improve that whole footprint over there and so they would like to sit with us and talk to us and they hopefully want to raise funds to supplement the amount of funds [Recreation Director] Steve Benko got in the budget to redo the playground.”

The moms also are willing to fundraise in order to supplement the $190,000 as needed, Campbell said.

Campbell said relying on the moms would “probably be a good idea,” as they’re the playground’s most regular users.

They’ll “know what kids are there all the time, what they use and what deters people from leaving trash,” Campbell said.

The working group from the town side will include commissioners Francesca Segalas and Laura Costigan, as well as Benko, Parks Superintendent John Howe and Department of Public Works Director Tiger Mann, Campbell said.

The moms will have input in a similar manner to those residents who regularly use Waveny Pool, Campbell said—a prized and financially self-sustaining New Canaan facility that sees a group of users help prioritize upgrades and amenities alongside town officials.

Benko said talks already are underway with a regional rep from GameTime, an Alabama-based playground equipment provider, that officials from that company have walked the grounds at Mead Park to see what pieces of playground equipment can be repaired versus replaced. The company is putting together conceptual sketches for the playground, Benko said.

“We could do something really nice to replace the existing big play structure for the kids, so we’ll put something together and then meet with the group and talk about ideas and they can add stuff,” Benko said.

Asked what sort of play structures can be purchased with $190,000, Benko said that installation costs often run far more than the equipment itself.

Campbell noted that “the positive thing is, we have time.” Because Mead Park sees heavy use during the summer, nothing will happen with respect to the playground equipment upgrade until October, Benko said.

“Their [the moms’] comments were they have some moms with special needs kids and they want to make sure there is something for them,” Campbell said. “They do not like the woodchips,” she added, referring to the ground surface in the area of the playground structures.

Benko said that a town in New Jersey that has a playground with a rubberized surface recently saw the whole thing go up in flames when someone set fire to it.

Segalas asked whether imminent plans to upgrade the two little league baseball fields alongside the Mead Park playground will disrupt or otherwise affect the timing of the playground equipment changes. Benko said no.

“They are very anxious to work with us and work with you guys, and I just think it’s a win-win,” Campbell said “And if they come up with a design that’s a lot more money or whatever, they probably can raise the funds.”