This week, the town can add ‘primetime network TV game shows’ to that list.

Rich Riley is the CEO of Shazam, the wildly popular music app used over 20 million times per day, and one of the executive producers of “Beat Shazam,” which will premiere at 8 p.m. Thursday on FOX. 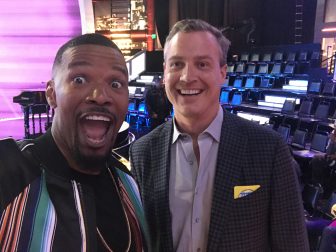 “I have to say, it is one thing when you talk about a show and you are looking into the mockups and descriptions—and then you go to CBS Television City where we filmed it and you’re in Studio 36, which is this massive 15,000-square-foot sound stage where they filmed ‘American Idol’ and other things, and there’s 400 people in the audience, and you see this concept brought to life by truly the best in the business, from the director to the set designer to the music people. It was incredible, and then watching the show in the audience and seeing how much fun it is, how interesting the contestants are, and how incredibly skilled Jamie Foxx is, in terms of a host, in terms of a comedian—he dances, he sings, he is just a blast to watch.”

A resident of the town since 2012, Riley sold his startup to Yahoo at age 25—it would become the website’s toolbar—and after working at the multinational tech company for 13 years, joined Shazam in 2014.

The mobile app identifies and names songs for users who hold their mobile devices toward a source of music, such as a car stereo. Once identified, users have the option to purchase the song, listen to it, share it via social media, view the lyrics or hear other music by the same artist or in the same genre.

Heavily advertised by FOX—it was the most promoted show in the United States last week—the game show will feature contestants competing against each other to guess a song first, until a winner eventually goes head-to-head against Shazam itself.

One element that makes the show unique is that it will allow those watching at home to get in on the action as well and win cash prizes.

Riley told NewCanaanite.com: “You’ll be able to ‘Shazam’ the show … and Shazam will know you’re watching ‘Beat Shazam,’ and then there’s the play-along game within your app, and so you can see if you would’ve been faster than the contestants and if you would’ve gotten it right.”

Riley and his wife Michelle, who serves as president of the nonprofit organization New Canaan CARES’ board of directors, are active in St. Aloysius Church in town and have a child in the public schools here.

While he enjoys music very much, Riley admitted that he himself is not a master of song-identification.

“I am not that good at ‘Name that Tune’ which, you know, I guess that’s why we have over 100 engineers solving that problem for those of us who aren’t gifted at it,” he said.

The concept for the show itself had been developed by TV producer Jeff Apploff, FOX network executives and pioneering reality TV producer Mark Burnett. That group approached Riley in his New York City office one year ago with the idea.

“This show has been incredibly fast-paced,” he said.

Riley said he enjoyed the “behind-the-scenes” experience of producing the first 14-episode season—and that he was awed by Foxx.

“It takes a while to film an episode, and even when they’re not filming—in between things—[Foxx] basically just turns around and entertains the audience,” Riley said. “I was with some guys in the control rooms and they said every other show they do, the host, during the breaks, just kind of walks off to rest or whatever, but Jamie literally will turn around and will be just as funny or funnier entertaining the audience while we waited for whatever were waiting for.”

The show allows someone to win $1 million every week if they can make it to the end and beat “this incredible two-story Shazam” screen.

While he enjoys music very much, Riley admits that he himself is not the best at the game.

Riley said that the challenge of the game show and the contestants featured in it are what make it interesting for him.

“You have to come up with the exact name of the song faster than Shazam can, so it’s really neat, and I have to say that the episodes that I have seen, it’s a good battle,” he said. “It’s really good TV, and the contestants are interesting. It’s a lot of fun.”