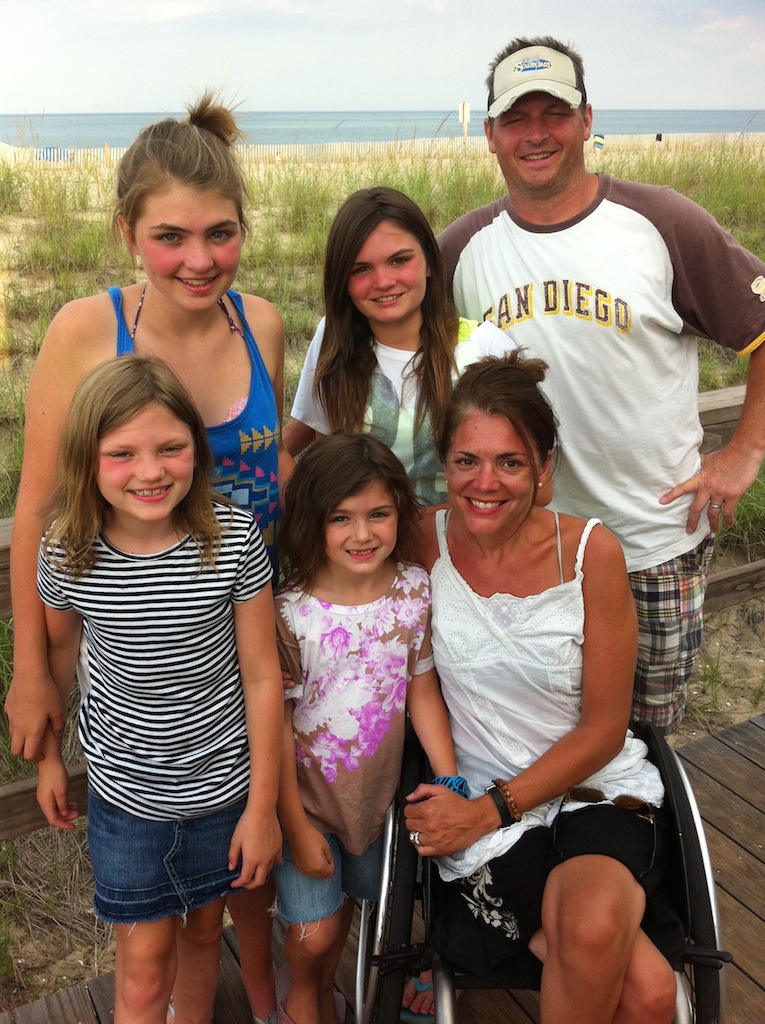 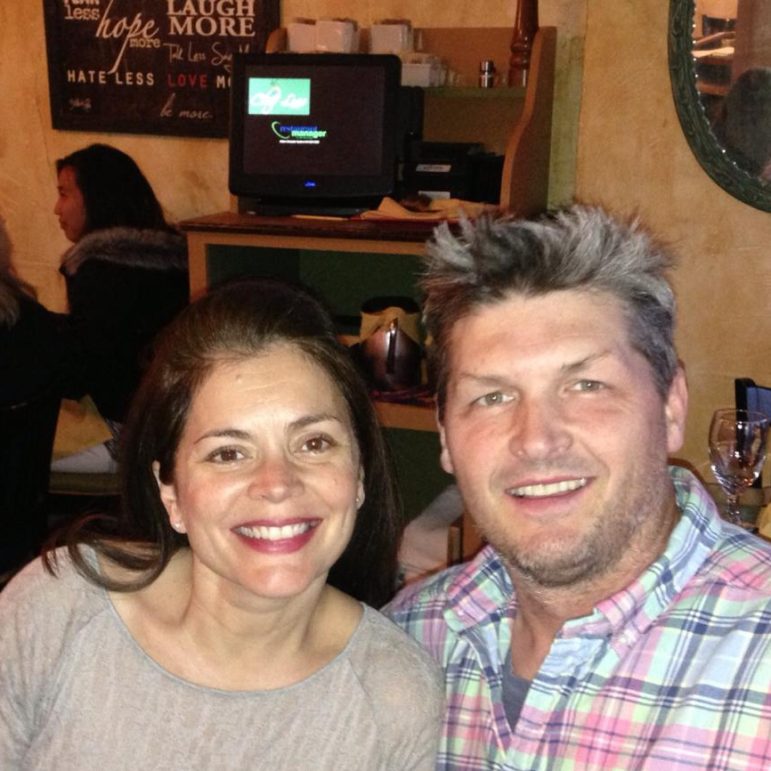 Where Fairy Tales Go is available for purchase on Amazon. Annette Ross will be in New Canaan for a signing at Design Solutions on Friday, Nov. 4 from 4 to 6pm. Credit: Contributed

All the Ross girls. Credit: Contributed

The Ross girls at Natalie's graduation from Cathedral Catholic High School in San Diego this past June. Credit: Contributed 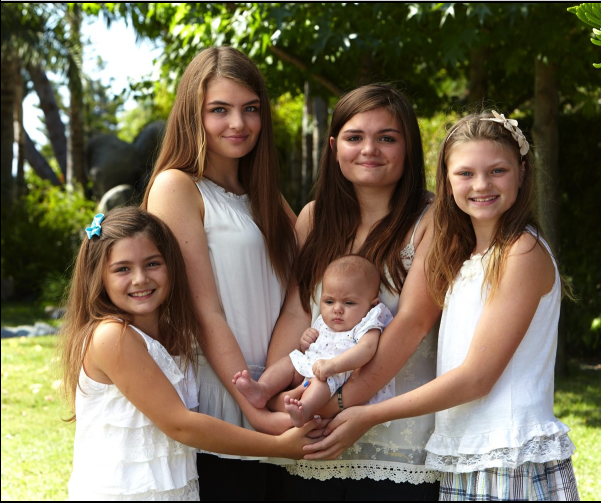 Life changed unexpectedly and irrevocably for Annette Ross in January of 2000. Just before the birth of her second child, Ross experienced a catastrophic spinal cord injury while receiving an epidural. The injury inhibited the use of her lower body and confined her to a wheelchair. A dream life that she shared with her husband Bill, living in New Canaan, appeared to have been shattered.

In the nearly 17 years that followed, Ross’s life has taken twists and turns, many of which are shared in her new book, Where Fairy Tales Go: A Love Story. The book tells an inspirational, moving story that runs the gamut of emotions from grief, denial and desperation to joy, love and hope—emotions that the author herself felt while writing it.

“It was a really cathartic experience,” Ross told NewCanaanite.com. “It had all these joyful moments that I loved to relive. And then the really beautiful times, pristine like us living in Chicago and starting out our life together. There were a lot of moments where I cried at reliving it, and would have to stop and think about ‘Should I let this go? Is this still such a part of me?’ But I guess that’s just memory—you’re back in the joy, you’re back in the sorrow and I experienced both in their fullness.”

Ross—now a mother of five girls—had been overwhelmed when she first moved to New Canaan from Chicago with Bill, a 1984 NCHS grad and former football star who rejoined the Rams as an assistant coach to Lou Marinelli in 2000, shortly after returning to town.

“I never thought that I would fall in love with New Canaan the way I did, only because I loved Chicago so much I thought it was home,” Ross said. “When I got to New Canaan I saw those tall trees and I felt this ominous feeling. All the houses were spaced out, and I felt like I was lost again. But then after a little bit of living there with Bill, I literally fell in love with it—every rock wall, every tall pine tree. I used to look up at the sky on a cold, starry night and say ‘I can’t imagine a more magical place than this.’ ”

Annette and Bill first welcomed daughter Natalie and shorty thereafter moved into their dream house they dubbed “The Pines” on Hemlock Hill Road. Just six months later, Annette’s injury occurred and life changed forever. In addition to coping and trying to rehabilitate herself, Ross had to deal with the new way she and her family was being perceived by her soon-to-be-dwindling social circle.

“The comment I got the most was that people couldn’t believe Bill stayed with me, which was a very harsh thing to hear all the time,” Ross said. “People feel that awkward way when a tragedy happens, and then the tragedy went on longer in people’s minds than it did for me. It was actually more our peer group that rejected us the most. The people in our neighborhood and a lot of our friends who were a little older really hung in there and hung tight with us. We did have a group of peers that Bill went to high school with who really stayed tight with us.”

Despite the additions of daughters Anna, Ingrid and Mia, it was a terribly difficult time for the Ross family. For Bill, the one place he seemed to find peace was back on the gridiron.

“After I got hurt and things were challenging for him, the only thing Bill looked forward to was coaching those boys in football,” Ross said. “The boys that he coached, including Curt Casali and Zach Renner, are still friends to this day. They keep in touch and he still feels a connection to that program and always knows how the Rams are doing.”

The Ross’s also found support from the St. Aloysius community, but that and football alone could not sustain them. Eventually the Ross’s bounced from California, back to New Canaan and then back to California again.

“I couldn’t understand how he was feeling and he couldn’t understand why I was hanging on,” Ross said. “When I got hurt something very pivotal happened to him. I might not have even been aware at the time, but it did. I think because of that, my book shows how you don’t make the best decisions when you’re in that situation.”

It was after the birth of her youngest daughter Georgia in 2013 and her second move to California that Annette Ross began formulating the idea of writing her book.

“I really didn’t think my life was interesting to write about, even though I really enjoy writing,” Ross said. “I had always wanted to write something and I thought for a long time that I might write a children’s book. After my injury I thought a little bit about writing but I really didn’t want to recall the injury and put all that drama on paper.

“Then after we moved to San Diego a second time, I fell and broke my leg and was back in the emotions of being hurt again and in a larger wheelchair. I just thought ‘I really have to let all this go in some way.’ I thought about all the books I read in the hospital and the books that helped me the most were the ones where people were going through hard times. It made me feel like I was less alone.“

The book—published earlier this month and available on Amazon—has drawn praise from the likes of bestselling authors Lee Woodruff, Thomas H. Murray and New Canaanite Mike Lupica. Ross herself will be in New Canaan on Friday, November 4th for a signing at Design Solutions from 4 to 6 P.M.

The 222-page book opens with the traumatic events in the delivery room where Annette’s injury occurred. It then takes the reader on a chronological journey through her life, spotlighting both light and poignant moments from childhood up to the present day. Ross feels that recounting these life events helped her ultimately find peace with her situation, focusing on the one thing that transcended all else—family.

“I married the right person and I love my kids,” Ross said. “I finally feel like I’m not letting the other things that happened get in the way of that. I feel a little regretful that maybe I lost a little bit of time in there when I was so sorrowful that I couldn’t embrace the people who I loved the most. I couldn’t feel the joy, but I do now. Maybe putting it down on paper helped me get to that place.”

The Ross family’s return to New Canaan will be a bittersweet one. Bill’s father John Ross passed away just days after Where Fairy Tales Go was published. A celebration of his life will be held at Waveny this Sunday, October 30th.

But for Annette Ross and her family, the sweet part of ‘bittersweet’ is something they have learned to embrace.

“The service for John is at Waveny, so we get to see Waveny, which is going to be absolutely lovely,” Ross said. “I know I’m going to take Georgia to Mead Park, which she’s really excited about. We’re going to get to celebrate one of our favorite holidays, Halloween in New Canaan. Is there any better place to be for Halloween? The simple things of being there the girls are so excited about, mostly just to see friends. That’s the main thing.”

One thought on “‘I Couldn’t Feel The Joy, But I Do Now’: New Canaan’s Annette Ross Writes Her Love Story”