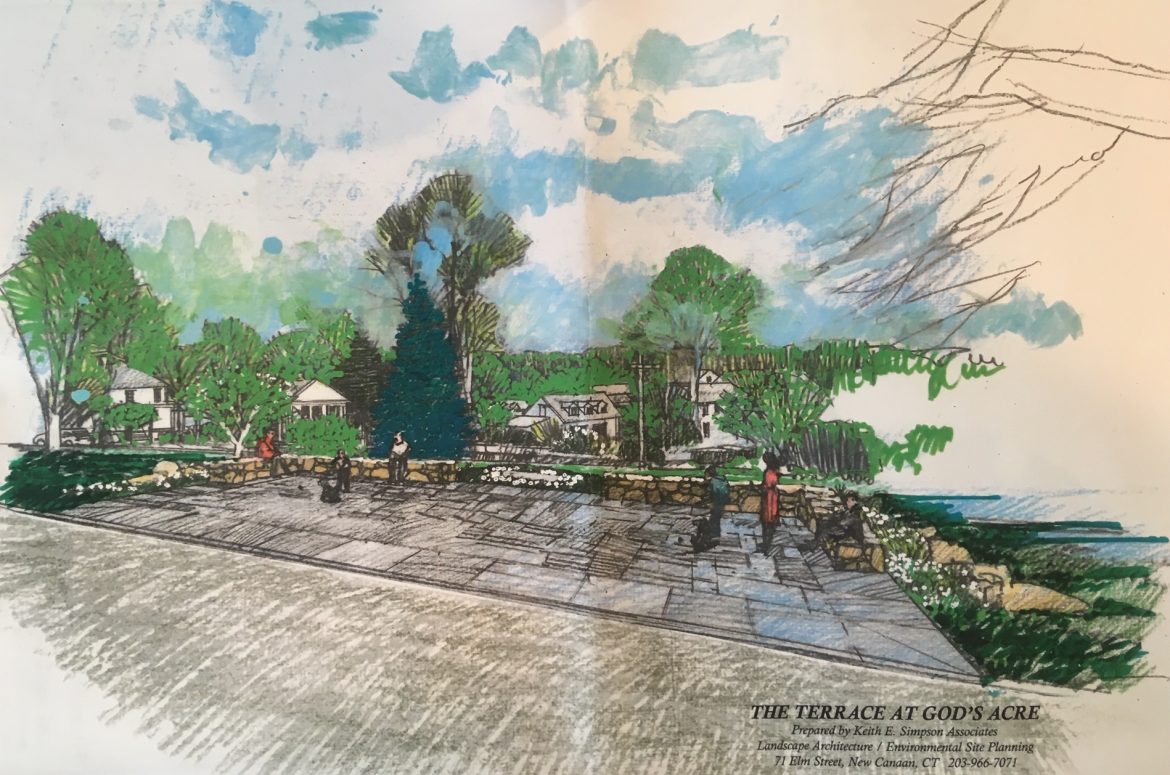 A member of the town commission charged with overseeing New Canaan’s Historic District said this month that the group should discuss further a proposed flagstone patio planned for the top of God’s Acre.

The Historic District Commission in February approved the concept of a 18-by-36-foot terrace to be located directly across Park Street from the entrance to the Congregational Church, designed to serve as a public gathering space year-round and a place where the Town Band could set up each Dec. 24 for Christmas Eve caroling.

Members of a volunteer committee that proposed the terrace have said organizers in the past have paid about $2,225 annually to erect a wooden bandstand for the Town Band. A permanent structure there would be both cost-effective and a year-round benefit to the wider community, the committee said. New Canaan’s funding bodies in September approved a $50,000 special appropriation for the project, to be paid with private donations raised by the committee.

The Historic District Commission had called for more details and visuals of the proposal, in part to determine just how the new structure would look from different points of view around God’s Acre.

Commissioner Carl Rothbart said during the Oct. 24 meeting, “We should be ready to have a further discussion about the platform that is proposed for God’s Acre.”

“I think we need to have further, more formal discussion,” Rothbart said during the meeting, held at Town Hall. “I believe that God’s Acre is part of the properties that are in the Historic District and I think it’s something we need to look at.”

He added, “From what I look at our map of the Historic District, God’s Acre is specifically part of the district.”

Acting Chair Janet Lindstrom said believed the property there belonged to the town and wasn’t certain whether the Commission is in a position to consider plans for the terrace. Lindstrom said she would contact First Selectman Kevin Moynihan to discuss the matter, and that the Commission’s review could come at a future meeting.

The committee that proposed a flagstone patio there referred to it as the “Founders Terrace” at September’s meetings. It includes Steve Benko, Leo Karl III, Steve Karl, Lisa Melland, Tucker Murphy, Keith Simpson and Tom Stadler, officials said at the Commission’s February meeting. In presenting to the Board of Finance and Town Council in September, committee members said they would seek to raise $50,000 beyond initial construction costs as an endowment for future maintenance.

One thought on “‘It’s Something We Need To Look At’: Commissioner Seeks Weigh-In on Proposed Flagstone Terrace at God’s Acre”