Growing up in New Canaan there was nothing Doug Williams enjoyed more than playing baseball at Mead Park. 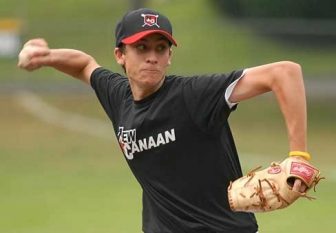 “That feeling was just the best in the world for me,” Williams recalled on a recent afternoon when asked to name a significant childhood memory of New Canaan. “Weekdays or weekends, spring or summertime, it didn’t matter when I played, I just loved playing there. The nice weather, my family cheering me on from the stands, and getting food with them after the game there—I remember it all so well.”

And during those games at Mead, Williams dreamed of a time when he would be able to share his enthusiasm and passion for baseball with an audience larger than the stands at Mead could hold.

Williams is now approaching his four-year anniversary at Sportsnet New York, a premier sports network in the nation’s No. 1 media market, New York City, where he’s been host of a talk show, “Baseball Night in New York”  or ‘BNNY’ since its inception in November 2015. The half-hour show discusses the day’s news surrounding New York’s two Major League Baseball franchises—the Mets and Yankees—with segments intended to provide both substance and levity.

In addition to his role as host of “BNNY”, some of Williams’s other work with the network includes being anchor of its nightly highlight show, “Geico Sports Nite”, in addition to being the field level and clubhouse reporter for New York Mets games. 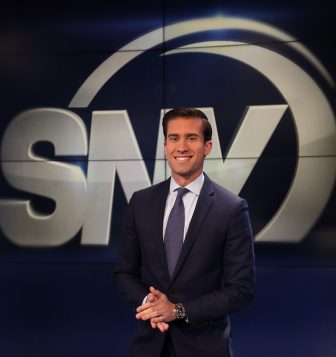 Williams was hired by the network in late-2014 after casually reaching out to fellow New Canaanite, Curt Gowdy, Jr.—son of the late, longtime sportscaster, Curt Gowdy, Sr., and an executive at SNY—via e-mail.

After doing on-camera work, online, several times as a production assistant at the YES Network, an agent reached out to Williams to gauge his interest level in gaining representation. Considering Gowdy Jr., at least, an acquaintance sparked Williams to write him a message asking his advice on the situation he had been presented with.

Gowdy Jr.’s reply: “Doug, would you mind coming in?”

Not too long after receiving that message, Williams was in a chair getting makeup put on him, preparing for the screen test of his life.

“I had never gone through that whole full makeup aspect of broadcasting before,” Williams said. “In fact, I couldn’t tell you a thing about that screen test because it was so nerve-wracking for me, I blacked out. But, hey, it got me hired.” 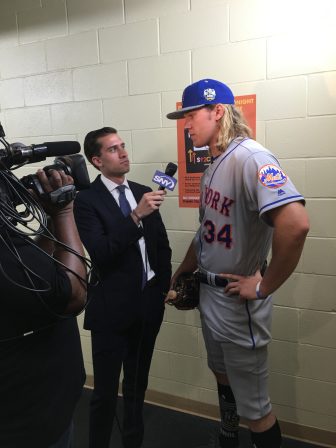 And his work at SNY and YES has given Williams access to professional clubhouses and the privilege of attending Major League Baseball’s All-Star game. And those instances provided him the opportunities to, one-on-one, interview athletes such as New York Yankees’ legend Derek Jeter and current Yankees All-Star Aaron Judge, in addition to New York Mets pitchers Jacob deGrom and Noah Syndergaard.

Those are people and places which Williams, 27, couldn’t have imagined having happened to him at this point of his career.

“Where I’m at right now, my career has certainly accelerated beyond even what I could’ve believed,” Williams said. “I’m very lucky to have my current job at SNY. I was 23 years old when I got hired for an on-camera job. I relied on my upbringing so much to help me with that transition because I needed those who were there for me as a kid to be there for me again.”

His upbringing included spending his formative years in two New Canaan schools—New Canaan Country School and St. Luke’s. Both were critical in shaping Williams in to the person he is today, he said.

“NCCS was just such a special place to me,” Williams recalled. “Those were some of the happiest years of my life. St. Luke’s was, too. There was a brief period of time [after graduating from NCCS] where I seriously considered going to boarding school which, I think, derived from so many people I knew doing it. And the idea of being independent that early in life seemed appealing to me. But, deep down, I think I always knew I would go to St. Luke’s if I got in—which I was fortunate enough to have happen.”

Like many who grow up in New Canaan, Williams formed long-lasting friendships while at the two schools, recently attending a going away party for one of them he met at St. Luke’s, in New York City, almost a decade after graduating.

Back during his time at NCCS, though, it was discovered that Williams had a “learning difficulty,” he said.

“I couldn’t tell you the specific diagnosis, but I believe it was established I was very much a visual learner—which caused me to need extra time when I was young as well as in high school [at St. Luke’s] when taking tests like the SATs. In sixth grade, NCCS legend, Fraser Randolph, proved to be someone very special to me, and integral in my development. Growing up, your teachers as much as your parents or anyone else carry a great amount of influence in the person you become.”

Family certainly is a key ingredient of Williams’ upbringing as well. Doug’s parents are Jane Stoddard Williams and Brian Williams. Stoddard Williams is a veteran TV news producer and current chairwoman of the board of the non-profit Horizons—an enrichment program for underprivileged kids across the country, which originated at New Canaan Country School. And Brian Williams is a longtime NBC News journalist and current anchor of MSNBC’s nightly news show, “The Eleventh Hour.” 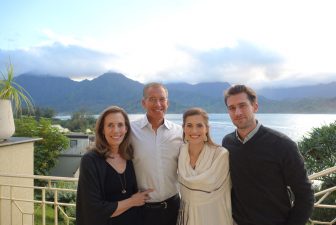 Their career experience has proven invaluable in guiding their son through the learning curve that the industries of television and news entails, he said.

Couple his parents’ successes with his sister Allison’s acting star continuing to rise with each passing year from her work in both TV (HBO’s “Girls”) and film (“Get Out”), and those on the outside looking in could chalk up Williams’s success as simply a byproduct of genetics.

“I first had to figure out if I was any good at broadcasting,” Williams said with a smile. “It’s not as easy as just saying my dad’s the reason I’m doing what I’m doing [today]. It required more than just my lifetime of watching him.”

It required exposing himself to a world of broadcasting different from his father’s. That process began at St. Luke’s, doing work such as PA announcing at football games as well as hosting a talk radio show with a classmate and friend of his.

Then in college at Elon University in North Carolina, it included work such as being part of a team which produced a pilot called, “Unsportsmanlike Conduct”—Williams and others’ take on ESPN’s “Outside the Lines”, for a local TV station. And other experience such as the several TV news courses he took with Elon associate professor Richard Landesburg, which included work that taught Williams skill sets essential to one being capable of working in news—working on deadline, how to be both behind and in front of a camera, how to tell a story, and how to shoot, edit, produce and write one. 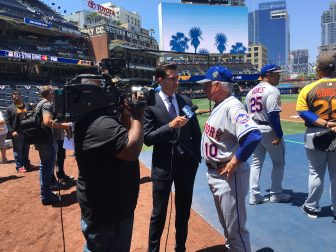 Without having put himself through all that, Williams easily could’ve seen himself pursuing other lines of work.

“There’s been times where I’ve thought I could’ve been a teacher or a psychologist,” he said. “Several different fields, at one point or another in my life, have interested me. And my family would’ve totally understood if I had gone in such a direction. There was never an expectation or pressure put on me to work in TV or the media. Never was there a thought, like, ‘Oh, that’s the family business so you must go into it,’ expressed. It just turned out that when I was at Elon, I found the work interesting, explored it to see if I was any good and, since then, I’ve found out that I’m semi-good at it—enough to earn a living at least. And I really haven’t looked back.”

Williams’s confidence in his performance, as well as all of those involved with BNNY, can be validated by SNY’s decision earlier this year to elevate the program’s status—which started out as three nights a week and only airing during baseball’s off-season—to being on five nights a week, year-round.

Which gives him that many more opportunities to experience the greatest team he’s ever been a part of.

“The fact we’re on five nights a week now is a tremendous source of pride for all of us at BNNY. Our producers are just spectacular at their jobs. When I arrive to work in the late-morning or early afternoon, they’ve already thought of things for our rundown that I didn’t think of, and couldn’t think of, on my own—which is such a luxury for us. There are a bunch of challenges to putting this show together but just as many reasons as to why it’s the best gig in the world. Our success is about making sure you keep the show feeling fresh, keep the people watching entertained and just have a good time every day—which I believe we do more days than not.”

One of the program’s loyal viewers is someone Doug knows rather well—his dad. He’s been his biggest fan since the day he was born and is someone Doug considers as more than just a fatherly figure.

“He’s legitimately my best friend,” Williams said of the relationship he has with his father. “We talk every day about what each other’s covering. I wouldn’t describe it as a mentor/mentee vibe because that’s not what he’s interested in being for me. If you don’t know either of us, you could paint a picture where he gives me pointers such as, ‘Next time in your third segment, Doug, you should do this.’ It’s so not like that. I found it hard not to laugh at times growing up when people would ask if I had a close relationship with him because of his frequent travel for his work. Sure, he was busy, but he always made time for me. I remember half-days on Wednesdays at NCCS, he’d be right there in the pick up line to get me and nothing made me happier. As a dad and friend he’s all I could ask for.” 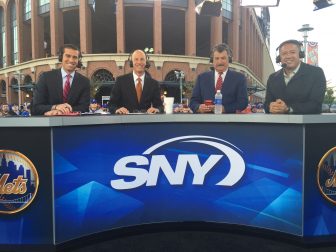 And there are still moments when Williams has to pinch himself that he’s living the dream he envisioned all those years ago on the ball fields of Mead Park.

“If you were to ask any 10-year-old, ‘Would you want this guy’s job when you’re older?’ They’re going to say, ‘Yeah! That sounds amazing.’ And I still have that perspective and allow myself to think about my job in that way. I’m most proud of the fact that I genuinely love what I do. All I do is watch sports and talk about them. And they’re focused on the teams I watched growing up. I never do anything at work that I don’t enjoy, which is such a thrill.”