Town officials plan to get permits this year for a widely anticipated project to replace Jelliff Mill Bridge, with work starting as early as next spring—though it hasn’t yet been determined whether one lane or two will be closed for two years of construction.

The bridge over the Noroton River, just south of Jelliff Mill Pond,  is “scour critical,” according to Department of Public Works Assistant Director Tiger Mann. A center pier is susceptible to erosion, which eventually can compromise the integrity of the bridge, and its “corrugated metal pipe culverts are rotted and do not have a bottom,” Mann said. 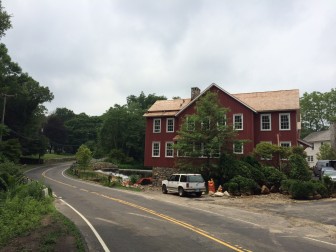 Officials say that right now, the plan during construction of a new Jelliff Mill Bridge is to keep one lane of traffic open on the popular east-west road, though it’s not absolutely ruled out that the whole road will be closed. Credit: Michael Dinan

As of now, officials plan to keep one lane of the bridge open while it’s being replaced, with a target start date of April, Mann said. (Once the town obtains permits, the project can go out to bid.)

Though they’re leaning that way now, officials also haven’t ruled out that the entire bridge could be closed for the length of the project.

Major criteria to be weighed in that decision include duration of the project, cost-savings and the construction itself, Mann said. Officials also calculate and give due consideration to how much neighborhood residents would be inconvenienced, Mann said. 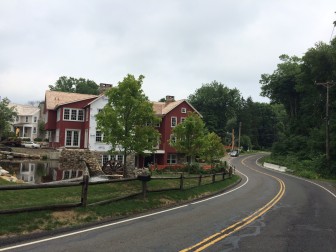 “Take that first house [west of the river],” Mann said. “We look at how far is his detour, what it normally was for him to go out to 106, how long it takes for him to get back there.”

Located just off of the Merritt and the Metro-North Railroad New Canaan branch station at Talmadge Hill, Jelliff Mill Road is an important, heavily used connector between Route 106 and Ponus Ridge. The nearest roads that do the same job are Frogtown Road to the north and Woodway Road (just past the golf club, hooking up with Hope Street) to the south. Ten condos are going up where the old mill once stood by the dam—a project called ‘Jelliff Mill Falls’ that had been opposed by local preservationists.