The most widely discussed suggested change to New Canaan’s major governing document that voters will face on Election Day came as a result of careful study of several neighbors and deliberate consideration of the town’s municipal structure, officials said Tuesday night. 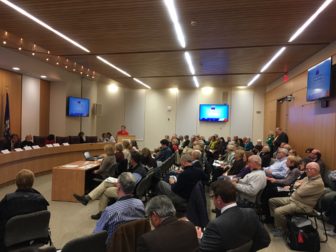 More than 100 people attended a League of Women Voters-hosted event ahead of the Nov. 8 election, at the Town Meeting Room on Nov. 1, 2016. Credit: Michael Dinan

In recommending that New Canaan remove the first selectman from the role of chairing the Board of Finance, the volunteer panel charged with studying the Town Charter looked around and found that the funding body was elected, rather than appointed, in nearby towns, members of the Charter Revision Commission said during a League of Women Voters of New Canaan information session.

“And so what we tried to do was find the best check and balance for the system that we have,” commissioner Kate Hurlock said during the session, held at Town Hall. “Because for all of the interviews that we did, it was overwhelmingly clear that the people that we spoke to wanted to keep the Board of Finance appointed and for reasons of the complexity of our budget and the size of our town and the talent in our town, it made sense to preserve that. So preserving that, how could we ensure a check and balance in that environment? And that is how we came to that conclusion.”

She added: “And I feel like I have to say that the argument seems to be becoming a little bit personal for this particular government, and our mandate was to look forward. It had nothing to do with this government.”

More than 100 people attended the event, organized and run by the League of Women Voters.

Billed as a ‘Charter Revision for Dummies’ info session that would put into plain language the major changes that the commission has put forward for the Charter, the hour-long session was moderated by Kathryn Tohir.

Formed one year ago, the nine-member Charter Revision Commission following multiple meetings and interviews with municipal leaders formed five major recommendations for the Town Charter (its final report is available here and embedded below as a PDF).

New Canaan electors will vote on those recommendations on Tuesday. They include:

The third among those recommendations has prompted some discussion and division among locals, and is at the center of a matter now before the state Freedom of Information Commission.

The second half of the league’s two-hour event—it opened with a debate among some candidates for state offices, a section moderated by Kay Maxwell (more on that below)—the info session included a review of the commission’s formation, process and point-by-point review of its recommendations.

Questions from those in attendance included a call for specific examples of items covered in question number five (bringing the election of town registrars of voters in line with state guidelines, for example, or moving toward a digital option in pushing out some public notices currently required to be in legacy print formats), what would be the downside if provision number four is not passed (the Ethics Board could run into confusion and overlap with the Personnel Advisory Board, which the commission is seeking to replace), whether the scope of the Audit Committee’s role could change if provision four is passed (what’s covered by the Charter is not changeable but what is covered by ordinance could be revised through a Town Council subcommittee) and whether the charter questions themselves require a simple majority vote of the electorate to pass (yes, pretty sure).

Most of the discussion centered on the question of removing the first selectman from the role of Board of Finance chairman—a change that Hunt said would represent a “diminution” of the highest elected official’s powers though he underscored that it was not a recommendation directed toward the current administration specifically.

One written question from those in attendance asked how New Canaan could ensure that all relevant financial data is available to the Board of Finance if the first selectman, with his or her “broad-based knowledge” of the town’s workings, was not serving as chairman.

Hunt responded that the first selectman would continue to participate in meetings as an ex-officio member but would not set the agenda for the finance board’s meetings—an especially important function during so-called “special meetings,” whose agendas cannot be changed mid-meeting by the board itself. Under the commission’s recommendations, the first selectman still would cast tie-breaking votes on the finance board, Hunt said.

In another written question, an attendee asked how accountability would be ensured on the finance board if the first selectman—the only elected official on it—was removed from his position as chairman.

Hunt answered that “the accountability remains with the voters in the office of the first selectman and the Board of Selectmen and to the extent that it is an approval organization, the Town Council.”

“If the voters are unhappy with the behavior that is occurring within the Board of Finance, their recourse goes back to the people who appointed them or approved they’re being there, but they would not be in a position to directly remove them.”

Noting that the entire finance board and half the Town Council have voiced opposition to recommendation number three, Board of Finance member John Sheffield why the last Charter Revision Commission did not make this same suggestion with respect to the first selectman’s role 10 years ago. He also questioned the usefulness of looking to other towns as examples when they have different local legislative structures—such as a Representative Town Meeting (generally a very large body), rather than a Town Council.

Hunt responded that the conclusions reached by the current Charter Revision Commission resulted from its own discussions and feedback from municipal leaders, and that he could not speak for the last group. Hurlock added that the commission did not reach its recommendations “in a vacuum.”

Town Council Chairman Bill Walbert, in attendance, commended the commission for its diligence and noted that all of its recommendations had been vetted by the full council and supported on the whole.

Those in attendance at the League’s event, co-sponsored by the Hersam Acorn Newspapers’ New Canaan Advertiser and State Rep. Fred Wilms (R-142). State Rep. Tom O’Dea (R-125) also attended for a period of time. O’Dea’s challenger, Hector Lopez of the Green Party, and Anna Duleep, a Working Families Party candidate challenging for the 142nd district seat, were not in attendance.