Mariella Montoni Scofield, a Brazil native who’s lived in New Canaan for eight years, wants her daughter to be tough.

An 8-year-old who soon will enter the fourth grade at South School, Gabriella Scofield plays softball and swims with the New Canaan YMCA Caimans, “but I want her to do this,” her mom said. 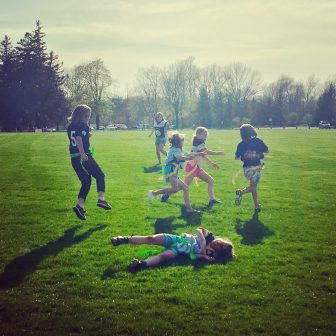 “I want my daughter to be tough and it’s a sport that makes you tough,” Montoni Scofield said. “You have to be tough and fast and you have to think ahead … I want her to learn so she can play with her brother and friends. And to stand up for herself. We have to do this for the girls.”

‘This’ being flag football, an increasingly popular sport in New Canaan that—like its traditional “tackling-allowed” counterpart—serves as a place for young kids to learn the ropes and rules of football, and that long has been dominated by boys.

Thanks to the efforts of Montoni Scofield and dozens of like-minded New Canaan moms (and a few dads), the town next month will launch its first official, competitive girls-only flag football program. So far, it’s drawn enough interest for one league service girls in the third and fourth grades, and just three more girls are needed for a second league serving fifth- and sixth-grade girls (see contact info below).

“I’m in shock,” Montoni Scofield said. “I can’t believe these mothers made this happen. I have been humble about it. I was like, ‘OK, can we get 15 mothers interested?’ and women came forward saying they wanted this to happen for their daughters … I am really amazed by the power of Facebook and mothers.”

Steve Dayton, recreation program director with the town who serves as head of the New Canaan Flag Football League, said he’s organized informal girls-only teams for six “practices” the past two springs, but that they didn’t draw enough interest for an official program or competitive play. The upcoming NCFFL program for girls will have a dedicated volunteer coach overseeing an eight-week program with practices as well as Saturday competitions.

Dayton said he and fellow NCFFL organizer Craig Hunt “have been to tournaments run by the NFL Flag league and they have always had girls-only teams in there.”

“And it’s something we always wanted—hopefully this is the start of something,” Dayton said.

In the past, he said, girls sometimes played on local co-ed flag football teams and enjoyed learning a new sport and running on the field, though their participation could be limited by some teammates.

Montoni Scofield said she was eager to launch a girls-only league because she herself observed in her now 10-year-old son’s flag football program, and also learned from moms who had daughters play co-ed flag football in the past, that the boys do not pass the ball to girls.

“I remember the first year when my son was playing flag football, there was only one girl playing and nobody passed the ball to her, and in my head I was like, ‘That is not cool and why is that?’ Because I would put myself in my son’s shoes. He would not pass it to her unless he was 100 confident she would score a touchdown. If they [the boys] did not have confidence they [the girls] can score a touchdown, they do not pass the ball, because they are built to win.”

She added: “If the girls are in an environment where they do not have to worry about the boys passing them the ball or not, and where they can learn the game, then in two years we can do co-ed and the boys will pass the ball. For women, we always have to prove that we can deliver. So I think, let’s take them out of the environment so they do not have to deal with the boys, and learn and have fun and explore,  and then put them back.”

Montoni Scofield said her daughter first first played flag football at South School, when teacher Bobby Rushton introduced it during recess, and noted that her son, soon to enter sixth grade and start playing tackle football, has participated in the NCFFL program “all the way through.”

“I’ve always loved the flag program and I decided my daughter should play because it’s such an empowering sport and an American sport and I want her to learn,” she said.

The entire Scofield family has learned the rules of a sport they’ve come to love, she said. When Montoni Scofield herself moved to the United States, “I had to learn football—I didn’t know a lot about football, but I love it.”

“We are Green Bay Packers fans and I get nervous every time they play, and when they are losing, I move the furniture around,” she said. “We, as a family go to watch high school football every season. On Thanksgiving we go to the Turkey Bowl every year. We haven’t missed it. My son’s birthday is around Thanksgiving and that is what we do on his birthday.”

Registration for the fall New Canaan Flag Football League season is underway and parents can register their kids online. Those with questions regarding NCFFL should contact Steve Dayton, recreation program manager for the town, at steven.dayton@newcanaanct.gov.