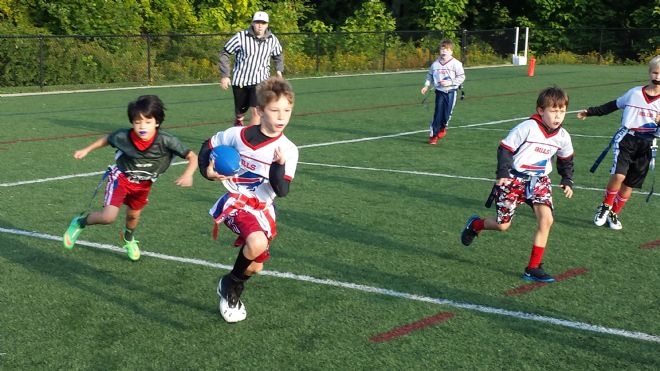 The New Canaan Flag Football League was started in 2005, and has continued to dramatically grow in popularity in the past ten years. Photos contributed by Craig Hunt. 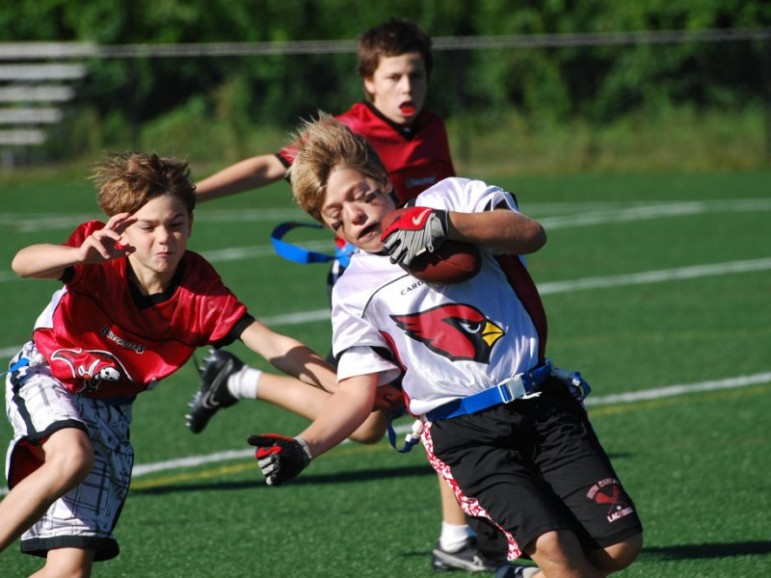 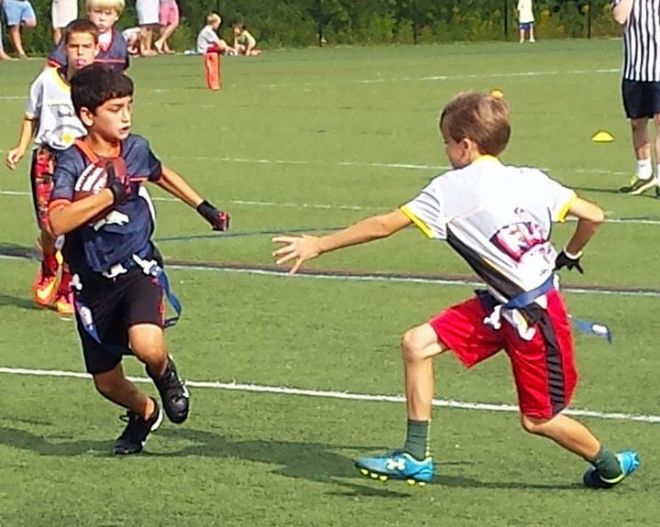 Every Saturday morning throughout the fall, New Canaanites should expect to see the Water Tower field packed with young boys and girls huddling up, running plays, tossing the pigskin and otherwise competing against each other in a full-on version of the nation’s most popular sport—but this is not tackle football, it’s flag football.

Since the start of the co-ed Recreational New Canaan Flag Football League (NCFFL) in 2005, the program has rapidly expanded and—thanks in part to a popular week-long preseason camp in August—welcomes kids from 2nd through 8th grade to participate.

When children are young, some parents worry about their kids playing tackle football for fear that they will get hurt, officials in the program say. Flag football gives kids the opportunity to learn and develop their techniques in the sport that they love, with not as much worry about concussions or other injuries.

“It got started because Phil Davis, who is a good friend of mine—we are going back almost 10 years,” Craig Hunt said, who has been involved with the program in 2008. “His kids couldn’t and were not participating in tackle football so he was looking for an alternative source for kids who wanted to continue to play and were interested.”

At the time, the small program was only able to field two teams, or 18 kids in total. The start of the New Canaan program came on the heels of a similar effort from the NFL, which had started a youth flag football league in the late 1990’s. Since then, flag football has grown dramatically around the United States.

“When the NFL started they had 1,200 [kids] participating,” Hunt told New Canaanite. “Last year the NFL [had] 250,000 kids playing in the United States, which is the size of a small city. [The NFL] hosts national tournaments which we [New Canaan Flag Football] have gone to.”

In 2005, the New Canaan Flag Football League fielded a team of 9- to 11-year-olds and another team in the 12- to 14-year-old age group. Since then, the program has changed to dividing the teams up by grade from 2nd through 8th grade, Hunt said. Coaches from the league have even fielded a travel team, which over the years has traveled to Baltimore and played at M&T Bank Stadium, where the NFL’s Ravens play, as well as Gillette Stadium and the new, NY Jets Practice facility. One year, the team even made as far as overtime toget into the National Championship , held in Florida at the ESPN World Wide of Sports Complex in Disney.

The NFL program allows players as young as five to participate, all the way through the age of 17.

“In some areas in the country, you go to Florida, flag football is huge in high school,” Recreation Director Steve Benko said. “In the Northeast we are still staying with tackle and flag has its place. But if you go to some areas of the country, you go down South and some places in the Midwest they actually have high school flag football leagues. But it’s a great program. It’s a good tool for teaching kids offensive and defensive skills and not everybody moves onto tackle football, but some kids do and many [of those] kids are very successful.”

The Recreation Department has even been thinking about starting a co-ed flag football team at the high school, if they were to get enough support from it, but have not gotten it yet, officials say.

“We’ve had a lot of interest in trying to get the high school level to play, but we still don’t have the numbers there so that’s why we cut it off at 8th grade,” Hunt said.

Although flag football may seem different from tackle football, some of New Canaan High School’s greatest athletes started with the sport, Hunt said.

“Look at our [NCHS football] captains [from this past season],” Hunt said. “Alex LaPolice started [with] flag football. That team, Peter Benko, all of those guys played flag football. All the varsity athletes from David Giusti to Clark Newlove, all of them played flag football. But, that doesn’t mean a lot of them stayed until the eighth grade level, some of them [stayed] until the sixth or seventh grade level [and] then they decided to go play tackle. They got bigger and their parents felt it was more supervised [by then].”

For Hunt, flag football is a way for kids to learn the game of football, instead of learning to push each other around at a young age.

“The thought behind it is that many experts, if you look at the most recent Forbes article in 2015, even the NFL and NFL coaches, and even one of the most famous coaches of all time, John Madden,” Hunt said. “He has a great quote saying ‘kids should never play tackle football at the ages six, seven, eight, and nine. They just got potty trained a year ago. We can’t be having them play tackle football.’ It’s interesting. So parents were more interested [in flag football for their kids]. Flag football is a speed game and so everybody gets to catch the ball. Not everybody gets to throw the ball. You still only have one quarterback. It’s basically agility and quickness as opposed to trying to hit someone. So at the early ages parents got more interested saying ‘well I’m going to [have my son] start with flag [football].’”

Flag football not only takes away a parent’s worries about their child getting hurt, but also gives kids the opportunity to develop their skills.

“The thing about flag football is that it offers kids the opportunity to learn the game and the fundamentals of the game,” Benko told New Canaanite. “There are a lot of kids who go on from flag to play tackle football. I’ll use my own son as an example. He played flag football until sixth grade, and then in seventh grade he moved over to tackle football. He graduated last year and he started on the varsity football team for two years so he learned a lot about football through flag and then he carried on to tackle. We have a lot of kids who do both. They go from tackle back to flag, and then they mature a little bit and more confident and then go back to tackle at the high school level.”

The NCFFL hopes to expand the league, but is limited due field space availability with other sports such as soccer and field hockey using the same fields. “We are probably one of the bigger leagues in the state of Connecticut, if not the biggest, so that’s a big plus just because of the way it’s organized,” Hunt said. “We do have real scoreboards out their on each field and we have four referees each game. Our flag football is 5v5 [so] we try to limit it to eight [kids per team]. We used to do ten and then we couldn’t get everyone to play.”

New Canaan’s league is different from surrounding towns such as Darien and Wilton who only offer a flag football league up until fourth grade, before kids have to move onto tackle to pursue the sport. The NCFFL hopes to expand their league by inviting those from surrounding towns to join them, similar to what the Waveny Pool does with swimming.

With roughly 42 coaches, each team practices one or two times a week with a game on the weekends, giving the younger kids the opportunity to still continue to play Rec soccer and flag football at the same time.

“We play on the Water Tower field on Saturday mornings between 8 a.m. and 1 p.m,” Hunt said. “We have three games going on at a time so what we do is play side-to-side because the football field in 50 yards long by 30 yards wide. [If we used the] full football field it would take all day. So what we do is divide the field up and have three games going on at a time. It’s kind of a hoot because you have several parents going down the field trying to figure out where their son is. Then we have high school referees and then three adult referees within the league. We try to recruit ex-flag players that are still in high school to referee.”

The NCFFL is ready to get started Aug. 15 with a preseason camp, and plans to run through Thanksgiving where it will have its final championships. As of now, the program already has a total of 125 players signed up and plans to max out at 225 players.

“I think it is a good teaching of fundamentals and kids learn about sportsmanship and being part of a team and it is very competitive so the kids enjoy it,” Benko said. “I think as some kids mature and get better they move to tackle. They take what they learn [from flag to tackle]. I think some of the tackle coaches were surprised [when the flag football kids moved to tackle] that they knew how to run a pattern and catch a ball. I think on defense kids learn how to read offensive stuff. [In the NCFFL kids] learn the offensive and defensive side [of the game].”