The single breakfast item that remains from the original Forest Street Deli menu these 22 years is the ‘Big O’: A grilled cheese with tomatoes, scallions, black pepper, roast beef and an over-easy egg. 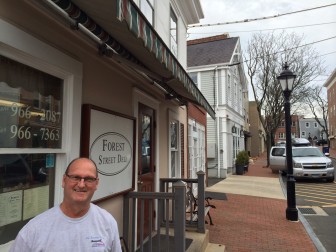 Bob Watters has owned Forest Street Deli for nearly 22 years. He's closing his doors April 18, as construction gets underway on a new mixed retail-and-residential complex. It's unclear whether he'll reopen in it.

“I’ve got people here who used to come in when they were five years old,” Watters, an Easton resident and 1978 Stamford High School graduate, told NewCanaanite.com. “And now they’re adults, they’re out of college. I’ve got kids who are now coming in here with kids who were their age when they started coming here. And it’s really funny, a lot of them still eat the same sandwiches they ate when they were 12 years old. The Big O is the one breakfast sandwich that’s been in here since I opened up.”

One week from today, Watters is closing Forest Street Deli—the building will be demolished to make way for a widely anticipated retail-and-residential mixed use space (The Farmer’s Table next door is moving to the other side of Forest Street).

Watters said he isn’t sure whether the deli will reopen or not—Chris Gatto, head of the company that purchased the property there and is putting up the new complex, has offered to bring him right back in once the place is ready.

“He has made me a generous offer to stay and build out,” Watters said. “He’s been very nice about it. He’s a very nice guy, the building is going to be gorgeous and everything. My only problem is it’s going to take a year for it to get up, a year and a half.”

In that time, Watters said, he may go into an entirely different field—possibly as the owner of a business involving education or healthcare, though he’s not sure.

Since September 1992, Gatto has made the 18-minute drive down from his Easton home (he lives just a couple of minutes off of the Merritt Parkway’s Exit 46).

The street has changed a great deal since, he said.

“When I first moved in here, I had Griffin Ford here across the street,” he recalled. “I had Lindner Motorcycles next door. Saturdays were unbelievable on the street. I had anywhere from 10 to 40 bicycles parked here at once. It was almost like a party every Saturday.”

Watters said that, other than Gates, Forest Street Deli is the oldest business on the street.

“New Canaan has changed a lot. But I just love all the people who keep coming back. I have people who live on the other side of the country and I’m their first stop. ‘I’ve got to have a chicken salad melt.’ I have kids who come in here with their laundry just coming off the train, saying, ‘I just came here first before going home, gotta get something to eat.’ When you live in this part of the country and grow up on a certain kind of food, whether it’s my chicken salad melt or Joe’s Pizza or something, you come back for it.”

2 thoughts on “Looking Back: Forest Street Deli to Close Next Friday”