In a first for our feature profiling local dogs, New Canine-ites, we spotlight here a canine that is not a town resident but is certain to become a fixture downtown, his owner tells us. 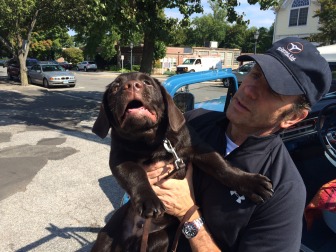 Lucas, age 3.5 months, is a chocolate Labrador retriever from Boothbay, Maine. We spotted the puppy on a recent afternoon at Zumbach’s with owner Matt DeGarmo of Norwalk, who deals in vintage cars.

Named for a childhood dog that DeGarmo had in the 1960s (the original Lucas was a German shepherd and golden retriever mix), the puppy was in town for the first time ever and—after a final distemper shot—he’ll be around a lot more to mix with other dogs and people in a busy setting, DeGarmo said. 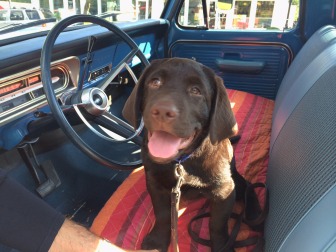 Asked what Lucas is like, he said: “I’ve had several Labradors before and I would say typically as a puppy he’s got lots and lots of energy, and also he’s incredibly brave and he’s not frightened by anything. He’s chill around the house. He’s doing really well. He’s got an amazingly calm personality.”

Not only was this Lucas’ first trip to New Canaan, it was also his first time in DeGarmo’s own 1969 Ford F100—all original, with 49,000 original miles, he said. DeGarmo—a morning coffee man who likes a latte later in the day—said he’ll be at the Oct. 19 Caffeine & Carburetors at Waveny).

New Canaanites can expect to see Lucas in these early formative months.

“We’ll be around town,” DeGarmo said. “It’s great to do leash-training o the sidewalks in town where there’s a lot of activity going on to teach him to stay focused.”

One thought on “Lucas the Labrador Puppy: First Time in the Vintage Truck”