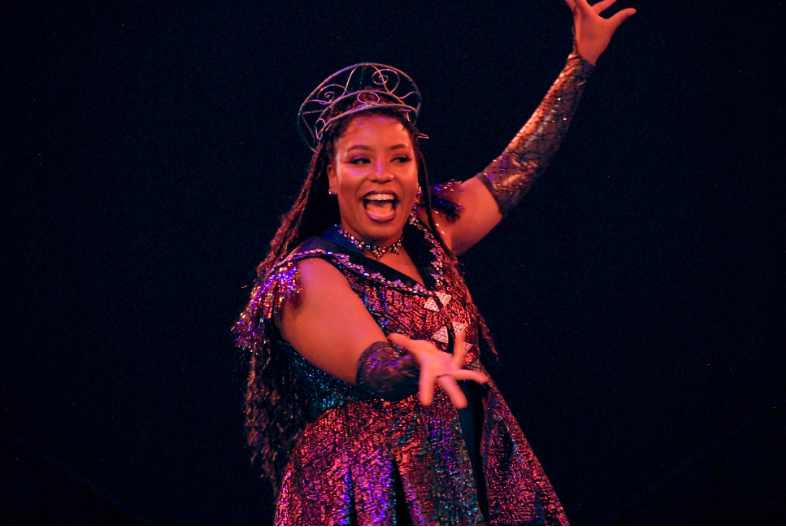 My first ever trip to a Summer Theatre of New Canaan production began with a mouth-watering picnic from Walter Stewart’s Market, savored on a park bench among the roses in the New Canaan Beautification League’s Center School Bell garden, listening to the buzz of bees in the clover and the orchestra warming up inside the tent across the road. Excitement filled the air as the crowds began to arrive for the opening night of the Summer Theatre’s bright, bold, hilarious rendition of the musical ‘PIPPIN‘ Saturday night. 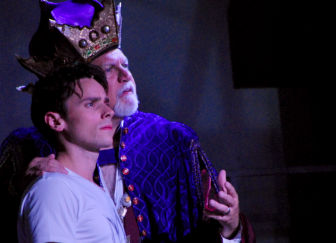 ‘PIPPIN’, for the uninitiated, is the almost entirely fictional story of Charlemagne’s eponymous son, searching for something to give his life meaning. He flits from education to war, to rule, unable to find fulfilment.

But Pippin is also a play within a play, drawing on the traditions of absurdist theater, with characters routinely breaking the fourth wall and speaking directly to the audience, highlighting the artifice of the magical world of theater, and emphasizing that Pippin is not the same person as the young man playing Pippin—a distinction that becomes more and more important as the show goes on and Pippin (or the man playing him) begins to understand what truly gives life meaning. 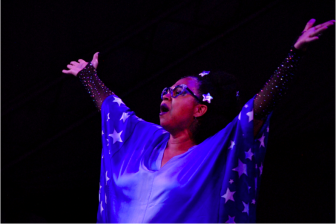 Though set in the 7th Century, ‘PIPPIN’ deals with distinctly modern themes—the dark side of religion, futility of war, complexity and diversity of sexuality, and the desperate search for meaning in an age that provides little in the way of profundity.

Co-Directed by Allegra and Christian Libonati, and under the artistic direction of Melody Libonati, the show leaned into the theme of magic—the magic of storytelling, the magic of the theater, and the pursuit of the ineffable ‘magical’ answer to life’s questions. The costumes were an eclectic mix of sheer, gauzy fabrics, bare chests and spandex leggings, giving the show an air reminiscent of “A Midsummer Night’s Dream.” Each character was given an alter ego based on the cards of a tarot deck, and a pack of tarot cards was left on the seat for each audience member, inviting them to become part of the magic. 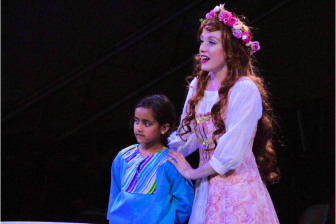 In a cast that is a constellation, it is difficult to choose individual stars to single out for recognition. Nevertheless, certain performances deserve a special mention.

Melissa Victor sparkled in the role of the Leading Player, both literally in her spangled pink and blue costume, and figuratively. Her strong voice and commanding presence allowed her to beautifully convey the Leading Player’s control over the story, and her rage as Pippin freed himself from that control.

Zach Schanne played Pippin with a moving depth and intensity. His subtly powerful performance drew the audience skilfully into Pippin’s mental and emotional struggles, so that by the grand finale it was deeply invested in the outcome of his desperate search for meaning. 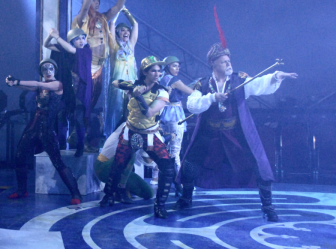 Playing the part of Pippin’s grandmother, Janelle Robinson dazzled. Though she only had one major scene, she imbued it with wisdom, strength and naughtiness in equal measures, leaving me wishing for an entire musical about her story alone.

Ella Raymont shone in the role of Catherine, beautifully using her talented artistry to draw attention to the difference between ‘love’ as an end goal, another thing to try out on the hamster wheel of life, and love as a process, a story that provides fulfilment not through magic and drama and fireworks but through the simple, everyday acts of care, of compassion, of fixing the leak in the roof of the barn. 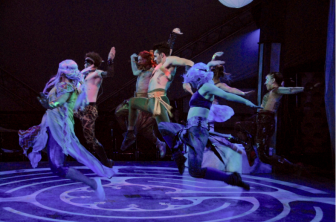 The chorus during the Summer Theatre of New Canaan’s “PIPPIN.” Photo courtesy of STONC

‘PIPPIN’ runs Thursday through Sunday until July 28that Summer Theatre of New Canaan’s new location in front of the library at 56 South Street. STONC has partnered with Walter Stewart’s Market and a number of restaurants around town to bring you pre and post theatre happy hour and dining specials. Click here for ticket information and show times.

One thought on “Magic in the Air: Summer Theatre of New Canaan’s ‘PIPPIN’ a Fabulous Mixture of Riotous Fun and Deep Introspection”