Karen Malner grew up on Parade Hill Road—a short, steep walk from St. Mark’s Episcopal Church—and each year at just this time, she and her friends had a little tradition. 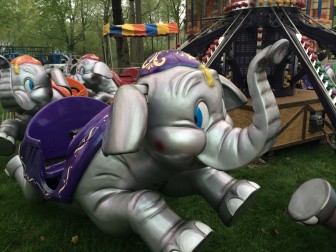 Rides at the May Fair, to be held Saturday—rain or shine. Credit: Michael Dinan

They’d head out on the Friday before the May Fair to check out the rides, then after a sleepover at Malner’s house, return for the fair itself.

On Thursday, the 1985 New Canaan High School graduate (then Karen Corker) collected her grand nephew Dylan Laviola from school, and during the ride home they talked about the May Fair, including the boy’s fear that it would rain Saturday. So, she brought Dylan to the pesticide-free, ride-filled field at St. Mark’s to show him that many of his favorite rides (bumper cars, carousel)—had roofs overhead.

For Malner, mother to two daughters—one in the eighth grade and one a sophomore at New Canaan High School—the May Fair itself (which runs rain or shine) is more than a local and family tradition. 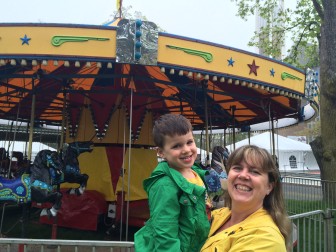 1985 New Canaan High School graduate Karen (Corker) Malner and her grand nephew Dylan Laviola, 4, both of New Canaan. Dylan heard at school that it would be “stormy” on Saturday (the May Fair runs rain or shine), which gave Karen a chance to relive a tradition from her Parade Hill Road childhood: Scope out the rides ahead of time. Credit: Michael Dinan

“To me it means the beginning of spring,” she said as staff and volunteers, ride operators, overseers of a popular sale and barbecue experts dubbed “The Holy Smokers” set up for the popular community event. “You just came out of the cold, just came out of the winter, hopefully the rain holds off—usually they get lucky and it’s nice—for me it’s like the beginning of spring and outdoor weather.”

St. Mark’s Director of Communications Megan Ferrell said that although some forecasts are calling for thunderstorms Saturday—last year, the church organ was damaged by a lightning strike—“people are thinking we’re going to be OK.” 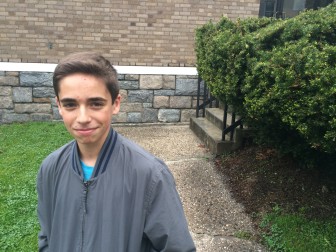 “A lot of people come here year after year,” Ferrell said. “People come back for it—for the strawberry shortcake, and the barbecue.”

The Rev. Peter Walsh—who took a degree in European History from Harvard and then earned his master’s of divinity, in 1992, from Berkeley Divinity School at Yale—called St. Mark’s “the tastiest ministry in all of Christendom.” He noted that the May Fair grew from a relatively small strawberry festival into “this absolutely incredible communal animal.” 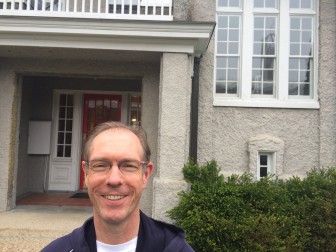 “It takes about 500 volunteers to put it on,” he said. “There are people that labor amazingly for this, and yet in some crazy way it sort of runs itself. It is tribal in nature, so that the book people and food people and ride people and game people and White Elephant people are sort of like different tribes, and their territory is staked out and they each oversee particular areas. Throughout the years, leadership has been handed off through the generations, and yet hardly any of it is really written down. It defies Harvard Business School case studies, and yet it runs remarkably smoothly. The community knows how to do this.”

Many St. Mark’s members staff the fair—and it also has volunteers from the community who have been going for “years and years and years,” he said.

“The week before May Fair is one of the happiest weeks in any 10 acres on the planet. It is an unbelievably joyous place. And the amazing thing about it is, we say in our mission statement that we are ‘to live to give for the love of the Lord’ and there is so much living that comes from giving.” 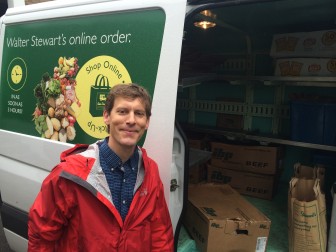 Walsh referred to the popular annual sale at the fair, where items purchased one year may return two years later to the sale in what he called “a full circle of May Fair life.” “They don’t make the long-term cut,” he said.

Equally important, not least to the diligent, dedicated “Holy Smokers” who work the Food Court, is the smoked pulled pork and brisket.

Founded about 10 years ago by a group that included Damon Smith, Chris Gruseke and Doug Keith, the Holy Smokers this year are using four physical smokers (the most they’ve ever had) to prepare more than one ton—that’s 2,000 pounds—of meat. 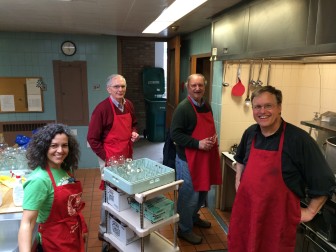 In the kitchen at St. Mark’s Episcopal Church. Cyra Borsy, Kevin McMahon, Bill Post and Virginian George Wright. Asked whether she considered herself a Holy Smoker, Borsy said: “I’m not. I’m definitely not.” Asked what it would take to become one, she said: “A lot of genuflecting, I think.” Credit: Michael Dinan

“It’s a pretty big team effort,” George Wright, a Holy Smoker, said from inside the kitchen, surrounded by Cyra Borsy, Bill Post and Kevin McMahon. McMahon also volunteers at nonprofit Future 5, founded by St. Mark’s member Clif McFeely—the Stamford-based organization a past beneficiary of the fair, which has helped raise $580,000 in the past five years alone for the St. Mark’s Outreach Commission.

Here’s a look at the smokers and prep, with Wright:

Asked how her experience of May Fair has changed with the years, Malner said: “It’s funny because I said to my kids, ‘I think I might go into the sale this year.’ Whereas when I was little, that’s where my mom went in and bought the books and looked at the sale. The moms and dads were usually in there and all the kids were all about the rides. But now it’s changed, where my kids outside the with rides and I’m excited to go inside and look at the books and sale and that kind of stuff.”