Plans for two Federal-style, adjoining townhouses on Main Street are drawing praise from some preservation-minded residents and neighbors in a town that often sees modern, custom-built homes maximize lots after tear-downs and loom conspicuously large. 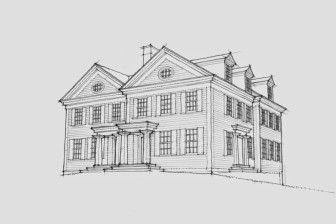 Designed by Fairfield-based Richard Swann Architect, the homes at 474 Main St. (between Woodland and Elm Place) maintain “village character and add dignity where it had begun to erode away with the previous cookie cutter duplex,” said New Canaan resident Martin Skrelunas, an architecture and landscape preservationist. He noted the “townhouse format with hidden parking, and an elegant face on the street.”

Slightly different in size though appearing identical from the curb (the southern unit is listed at $1,650,000, northern at $1,495,000), the townhouses are on track to be constructed this fall, according to builder Kaeser Homes.

Swann told NewCanaanite.com that what drove his design for 474 Main St. was a desire to “live up to that sort of New Canaan vernacular.”

“New Canaan has this wonderful history of Greek Revival in town homes and so forth, so these townhouses were totally driven by the desire to be good neighbors and to be contextual from that urban design point of view and whether it was a single family home or these townhouses this idea of garage doors facing the street or cars living in the front yard would have been a major challenge, so for that reason we ran the driveway around so that cars could load in the back and the turnaround and guest parking area are in the rear, so we present to the street a very traditional, quasi-historical façade that we would be a good neighbor and would be appropriate to south Main Street,” he said. “There had been an earlier design that the developer/buyer had looked at that was much more of a generic condo and to his credit, he set that aside and let me come in and do something that was much more eclectic more consistent. It’s along the lines of what distinguishes New Canaan from some of the other even excellent towns in Fairfield County like Darien and Greenwich.”

John Engel of Barbara Cleary’s Realty Guild, a Realtor for the property, said he’s had wide interest from people who want to downsize—empty-nesters, for example—who see value in a 3,000-square-foot home at substantially less than $2 million. 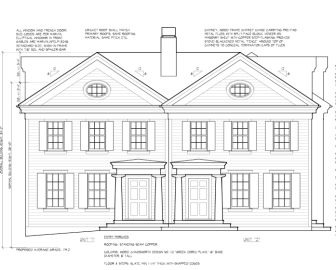 The townhouses, which overlook the Fivemile River out back, are considered “in town” because of the Main Street sidewalks (which run along the opposite, western side), Engel said. “Those sidewalks get used extensively by people in the neighborhood,” he said. “They’re getting used a lot and the perception is that people want to live on a road that is accessible to the downtown by sidewalks. Traditionally, people asked to live off of South Avenue because of the sidewalks there, and now there’s new interest in Main Street.”

Meanwhile, PJ Taylor, a resident of the Main Street neighborhood as well as a Realtor herself at Berkshire Hathaway HomeServices New England Properties, said she had hoped that the property at 474, after the duplex there had been razed, would see something go in that was similar to condos that New Canaan’s Arnold Karp Associates had designed for Richmond Hill Road between Grove and Park. 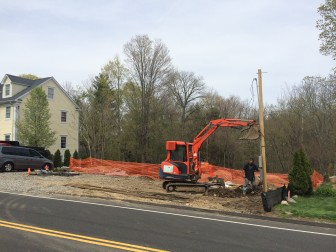 Construction is underway at 474 Main St. and is expected to wrap up in September. Credit: Michael Dinan

Taylor said that what’s planned for 474 Main St. is “tremendously attractive” and well-integrated with the street.

“They’re architecturally interesting and pleasing,” she said. “I think it’s wonderful that they’ve looked into the form of it as well as the function.”

“Main Street is fascinating, because it remains historic in character despite not officially being protected,” said Skrelunas, who is familiar with official protection through his education and profession, and who sits on the New Canaan Historic District Commission. “The property owners seem to self-police very nicely. The house that was recently re-built on the corner of Harrison is a good example. The family was encouraged to build out to the maximum by one architect and they knew it would be wrong, so they found a different architect. Closer to town there is a Queen Anne-style house that is being reconstructed and added onto. It would have been much easier to tear it down. All the other antique house are maintained as they are as a result of pride, not because of rules or zoning.”

Noting that the property slopes down to wetlands in back, Swann said the build-able footprint of the property at 474 is very small.

“So whether it’s a single-family home or townhouses, it’s an urban type of site—I think of the regency townhouses in London or Boston’s Back Bay—it’s an urban townscape kind of feel there on the street, and I argued that the property would be best served by something conforming from that context,” he said.

More details of the townhouses at 474 Main St. can be found here and here. Here’s where they’re going up: