Mead Pond is poised to get its first dredge since 2011, following a unanimous vote by the Board of Selectmen Tuesday morning. 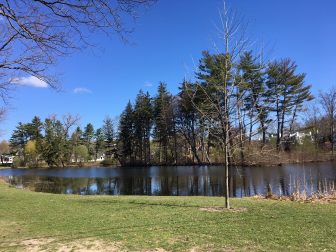 The board during its regular meeting approved 3-0 a set of contracts totaling $10,000, with area excavation and hauling companies.

Town workers now are lowering water levels at Mead Pond as part of a widely anticipated project to restore and extend the park’s memorial walk honoring those who perished during World War II—the Gold Star Walk—creating “a perfect opportunity to take a look at the two gabion weirs that are protecting Mead Pond,” according to Department of Public Works Director Tiger Mann.

“Mead does not get as much of a sediment load as Mill [Pond] does, so this will be our first time getting a look behind the weirs and what is trapped,” Mann said, referring to a screening system.

First Selectman Rob Mallozzi and Selectmen Beth Jones and Nick Williams voted in favor of a $4,000 contract with Hussey Brothers Excavation, $4,000 with FGB Construction for excavation work, and $2,000 to Lanni Construction for hauling.

Mann said the dredged material may be moved to the leaf mulch site or elsewhere (not the cornfields at Waveny), depending on what’s in it. Mill Pond is dredged far more often than Mead because it needs that work done. Asked by Jones how long the Gold Star Walk work, which involves footbridges, will require the water to be lowered, Mann said a couple of weeks to install footings and stabilize the embankment.

Mallozzi called the allocation “some of the best $10,000 you could possibly spend.”

“This was a $1 million project back in 2011 and it’s indicative of the way we approach things in public works, where you take on these massive jobs and then keep up the regular maintenance,” Mallozzi said. “It is imperative that we do it. Ten thousand dollars is a very small price to pay. That pond has just improved so much.”