For this installment of “New Canine-ites,” we caught up with a pair of new residents, puppies Bruno and Winston Bratches, in front of Family Britches on Elm Street, where a small crowd had gathered to admire them. 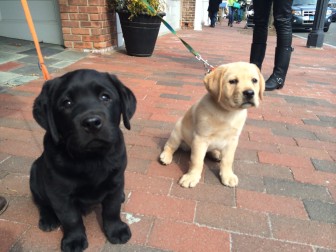 The family decided to get the dogs after losing two 15-year-old yellow labs, she said.

Asked where New Canaanites can expect to meet the pups, Bratches said: “We’re socializing them all over town. We’re not dog park people, so we will socialize them all around town.” 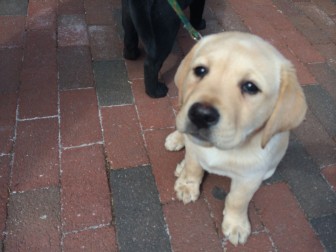 “They will be at Family Britches all the time,” she added with a laugh as staff members at the Elm Street store joined the crowd on the sidewalk, admiring Bruno and Winston. “The dogs stopped here. They wanted to get themselves something to wear.”

Bratches said her vet is Dr. Daniel Hochman at Grove Street Veterinary (“great vet”) and that the dogs eat Artemis dog food from Village Critter Outfitter on Cherry Street, “with a spoonful of cottage cheese.”

Asked what the cottage cheese is for, she said: “It makes their coat pretty.” 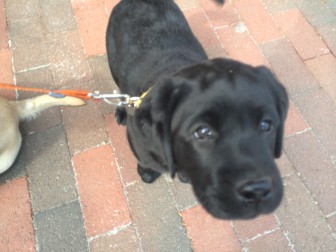 We also asked about the draw of Labrador retrievers (far and away the most popular breed in New Canaan—at last count 530 registered here, with the next-most golden retrievers, at 246).

“The temperament,” she said. “They are just so good and they’re good with kids. Everybody stops them around here. Everybody is good to them.”