District officials said Monday night that they’re gathering more information for Board of Education members before the elected group votes formally on whether to allow a K-9 dog in New Canaan Public Schools. 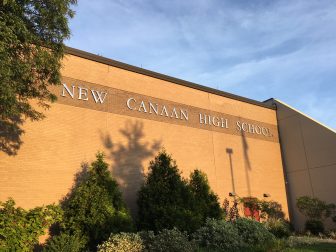 Some Board of Ed members last month voiced concerns over the prospect of adopting a new policy whereby police could be invited by the district to bring a drug-sniffing dog into a school.

Since then, administrators have received “a couple of questions from the Board,” Superintendent of Schools Dr. Bryan Luizzi said during a regular meeting of the Board of Ed.

“One, for instance, around how many school districts in our [District Reference Group] have such a policy, things like that,” Luizzi said during the meeting, held in the Wagner Room at New Canaan High School.

“We expanded it a little bit just to look around, we asked nine other districts, and it’s not helpful at all in that four of them do not have a policy and five of them do. Pretty much down middle. So we are continuing to develop some more information around this and I think that more conversation is in order for the board and for the administration as we continue to move forward.”

The district intends to “find and develop ways to gather some feedback from the community, those who would be impacted by such a policy,” Luizzi said.

He continued: “I’ll share with them some information from other districts that may or may not have this, maybe have some experts speak as well in the legal system, about the outcome, the results, the processes that go with this, so that the Board can make the most well-informed decision possible prior to having it on the agenda. So we are working on what that process would look like and will be sharing it with the Board.”

Earlier this year, the Board of Ed had been considering adopting a policy based on a template supplied by the Connecticut Association of Boards of Education that would “permit the administration to invite law enforcement agencies or other qualified agencies or individuals to search school property with dogs trained for the purpose of detecting the presence of illegal substances, when necessary to protect the health and safety of students, employees or property and to detect the presence of illegal substances or contraband, including alcohol and/or drugs.”

Both police and some residents have pushed for such a policy, and in July it appeared that the Board of Ed was nearing a vote on it. Luizzi said at the time that the policy “really speaks to a belief in the importance of having substance-free schools.”

But last month, Board of Ed Chair Dionna Carlson said she had open questions and concerns about how such a policy could alter the lives of students.

Luizzi’s comments during Monday’s meeting came in response to a request from Board of Ed member Sheri West for an update. Referring to official minutes, West noted that the school board at its August meeting had said it would take up the question of allowing a K-9 dog in schools, but had made no mention of it as the 90-minute meeting wound down.