In New Canaan, Senior Prom Night is more than a few awkward pictures taken by parents as high schoolers make their way out the door and onto the dance floor. Many of the memories of Senior Prom begin after the prom is over at the Annual Post Prom held at the Waveny House.

Last Friday night, the doors opened at 11:59 p.m. and food, games, shows, and raffles continued on until the sun was rising at 5 a.m. The theme of the night was Flashback Friday in which the seniors were taken on a journey through their childhood in New Canaan. 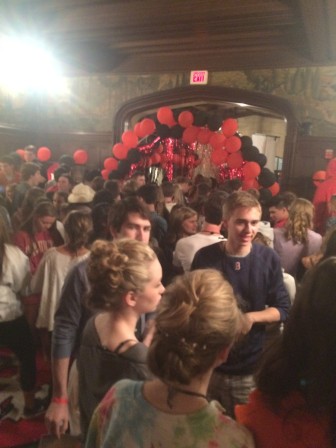 Scenes from the Post Prom Friday night. The theme of the night was Flashback Friday. Use the hashtags #fbfnc2015 on social media sites such as Instagram and Twitter to see more pictures of the night.

The New Canaan High School class of 2015 would like to thank all of the parents that spent over a year putting together this unforgettable night. The event was organized by Post Prom Chairs Whitney Legard Williams, Cam Hutchins, and Sue Kammler, along with many other parent volunteers.

The event was very successful with about 360 people in attendance, including about 98 percent of the senior class.

Mother of seniors Shaan and Deven Appel, Sangeeta Appel, was a volunteer for the event, particularly helping out with the Post Prom Fashion Show, decorations, and security. “There are three main chairs for the post prom and underneath there is a dozen different committees with lots of different helpers underneath them,” Sangeeta said. “They actually started planning it last September and then they meet once a month and then more frequently as it gets closer to prom.” 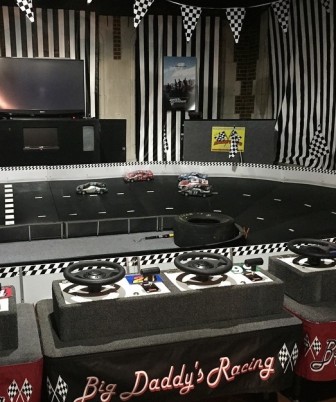 A race car track was set up in one of the rooms of the Waveny House. For each activity that kids took part in, they received tickets. The tickets were used to place on prizes, which were raffled off throughout the night.

To raise money for the event, parents of seniors donated to the cause and helped receive sponsors from businesses in the community. “Sometimes it wasn’t a monumental amount, but businesses might give a gift or a prize for the event and/or sponsor the food,” Sangeeta said. “We had Chicken Joe’s provide food. Fundraising was done in multiple different ways.”

On the day of the prom, senior parents took 10 hours transforming Waveny House into event, starting at 8 a.m. and finishing around 4 p.m. Many of these volunteers then went home and got a few hours of rest, before making their way back to Waveny to work the post prom throughout the night and into the morning.

Tracey Karl said the entire prom committee thanked those in charge of a hugely successful post-prom.

“This was my fourth post-prom and I have never worked with such capable, friendly awesome people,” Karl said. “Not that they weren’t good [in the past], but this one was just special. There are a lot of our last kids with this group, so it’s a whole different feeling and it was good—a brilliant, brilliant committee.”

Many New Canaan High School seniors would like to thank all of the parents that took the time to make the event so memorable and spectacular:

Elizabeth Koennecke: “Thanks so much to the Post Prom Committee! The decorations and the shows were so fun, but my favorite part was the senior slideshow. It was so wonderful to see all the pictures of the grade, and get to see what everyone has been up to these past four years. It was very bittersweet.”

Sam Santoni: “Thanks NCHS parents for the awesome Flashback Friday! I loved how everyone stayed until the end. It was so much fun, especially the May Fair themed games!”

JP McMahon: “I was stunned when I walked into post prom. I had heard it was a great experience from last year’s seniors, but I never anticipated anything like what I saw last Friday night. Truly an incredible job by the parents and Post Prom Committee for putting together such a wonderful event.” 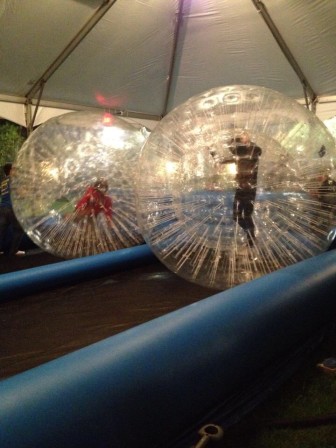 A tent was set up behind the Waveny House for life-size hamster ball races for the seniors to take part in throughout the whole night. Other activities included on the first floor included bingo, a Photo Booth, and Henna tattoos, while upstairs a mentalist, magician, and hypnotist put on shows.

Chase Williams: “We all marveled at the spectacular work put into the post prom!”

Isabel Taben: “Thank you prom committee! Post prom was so much fun! My favorite part was the great games.”

Conlon Kiesling: “Thank you Whitney Williams and the rest of the Post Prom Committee for spending this past year of your life creating a magical night for us seniors!”

Emma Patch: “Post prom was very extravagant. We’re all so lucky to have had such a dedicated team of volunteers working to make our night as special as it was!”

Lauren Williams: “Big thanks to the Post Prom Committee! You made it so memorable and special. Mom, thanks for helping out and staying up way past your usual bedtime to run the games. My favorite part was going to the Mentalist Show with my friends because it was at 3:00 a.m. and the mentalist seemed to know everything that was going on in our heads, which made me more confused than before.”

Jimmy Dolphin: “Thanks to the Post Prom Committee. The hamster balls were great and it was hilariously fun racing my date down the track.”

Eli Litchman: “Thank you for volunteering your services for a fun night. It was a huge sacrifice and we all appreciate it greatly. Not only was it decorated very well, but everything was executed superbly. It couldn’t have been done without you guys!”