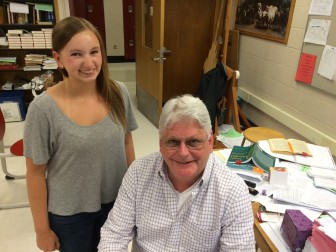 And before last week, she never had reason to meet the (white-haired) teacher.

Then a sophomore, Austin Pelli, a student of Harvey’s and member of the extracurricular club that Park founded two years ago—the Rising to a Cure Club—hit on an idea for a fundraising challenge: They’d try to raise $200 in spare change collected from students during two lunch periods, and if they reached that goal, Mr. Harvey would dye his hair pink.

“I think they sold me cheap, frankly,” Harvey said with a smile Wednesday afternoon in Room 114, Park sitting one desk away.

In all, the club raised $279.66, and Harvey on Thursday evening will dye his hair pink as promised (with a hand from his son’s girlfriend—his boys are unwilling to help) then come to school Friday and face the student body.

For Harvey, a 1971 NCHS graduate with an appreciation for the dramatic—he did a lot of theater as a kid and ran the theater program at the high school from 1983 to 1990—the “Pink Hair Challenge” (we’ll call it) is a fun way to give the students a laugh while supporting the club’s cause.

For Park, the fundraiser, challenge, club and cause are profoundly personal and important.

The club raises money for Camp Rising Sun, a weeklong summer camp in Colebrook, Conn. for children that have cancer or have had cancer. Park as a six-year-old had been diagnosed with rhabdomyosarcoma, a tissue cancer that was found in her nasal cavity.

“To raise $300 just makes me happy, because I know I’m helping out these kids who are coming into this camp new with bald heads, just like I was,” she said. “And I’m going to help them have the time of their life at the camp, and help them feel like a normal kid for a week. I remember going there. It is just a family. Everybody knows exactly what you’re going through. You don’t have to go out and have people kind of look at you and wonder what’s happening. They all know what you’re going through. They’re going through the exact same thing. And I have made lifelong friends through this camp and it just means the world to me.”

Park remembers the very day her cancer was diagnosed. It was Dec. 8, 2003, and she was in the first grade at East School.

“The pediatrician looked down my throat and he saw the mass of cancer hanging there,” she recalled. “He said, ‘I don’t know what that is, but it is not normal. You need to go to the hospital right now.’ ”

A biopsy revealed the sarcoma, and Park started on radiation and a year of chemotherapy that week. She lost all her hair, and side effects included the paralysis during treatment of the left side of her face, from nerve damage, and she missed the second half of first grade and first half of second grade.

Park’s oncologist told her about Camp Rising Sun, and she’s been going every summer since.

“I have pretty much known since about seventh or eighth grade, that I wanted to start a club to raise money for this camp, because it’s been in my life for so long and it is so important to me,” said Park, who is a year-round competitive diver with the Rams and the Whirlwind team out of the New Canaan Y.

Park’s club now counts 50 members, and she’s unsure whether it will continue after she graduates in two months.

At 17, her cancer has been in remission for 10 years, and Park is planning to attend the University of North Carolina at Chapel Hill in the fall. Before she does, though, Park will spend a week in August at Camp Rising Sun as a counselor-in-training.

“And then the year after that, hopefully, I will be hired as a counselor,” she said.

Harvey said that when Pelli first approached him, he was on the fence about whether to offer up his head to the challenge, but quickly agreed once he met Park.

“The indications are that my male students contributed a lot of money,” said Harvey, who also has run the A/V Department and taught health at the high school. “And my female students are apprehensive. They’re like, ‘You’re not really going to do that.’ For some reason, they are way more embarrassed for me than I am for myself. The boys are not. The boys are looking forward to it.”

And Park is looking forward to another week at Camp Rising Sun, which is operated out of the YMCA’s Camp Jewell site: horseback riding, swimming, laser tag, a themed dance, barbecue with fireworks.

She returns to the camp to reunite with friends—friends with whom she shares deep, meaningful bonds—and also to be there for new campers who look up to the older kids, many of them cancer survivors.

Through the camp, Park has forged friendships with kids whose cancer has gone into remission, and others who were not so fortunate.

“I have lost a few friends and it is hard,” she said. “Because I feel like I am almost too young to have seen so many of my friends go. But it almost makes me keep going, because there is obviously a reason why I am here. So I want to make my time here worthwhile. I never want to take any day for granted.”