New Canaan library next month for its popular, annual Conversations with Business Leaders lecture series will host one of the most prominent and influential business journalists of our time. Carol Loomis, the longest-tenured employee in the history of Fortune magazine, retiring last summer after more than 60 years with the company, will speak May 31 at the library. The free event will be held at 4 p.m. and registration is required, here.

Organizers say Loomis, in interviewing many modern business leaders in the course of her career, likely has had more “Conversations with Business Leaders” herself than any other journalist, forging a unique perspective on the economy by recording their challenges and successes.

We had an opportunity ahead of the talk to put some questions to Loomis. Our exchange follows. More information about the series can be found after the Q&A.

New Canaanite: Yours surely is one of the most widely anticipated installments of New Canaan Library’s popular “Conversations with Business Leaders” series. What made you want to participate? What can you share about your ties to New Canaan? If you live here, please talk to us about some of your favorite spots in town to relax, dine, shop or otherwise spend time. 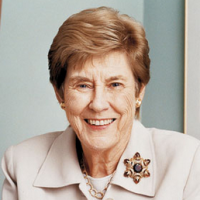 Carol Loomis: My ties to New Canaan are through my son, Mark Loomis, and his family, who live in the west part of town. His two children, Jenny and Ben, went to West School and are now at Saxe. The invitation to participate in this program came through a friend of Mark’s, Bob Seelert, who by coincidence I had once interviewed for a Fortune story. (That was when Bob was at General Foods). I had been at the New Canaan library once for a sports program that Mark was involved with (he’s always been in TV sports production, and is now with Fox Sports) and my daughter-in-law, Steffi, had been close to the library. Also, doing a little baby-sitting duty, I had taken my grandchildren there and therefore had a chance to see what a good library it was. So all the stars seemed right for saying I’d participate in this program. I really don’t know New Canaan’s restaurants well enough to say much about them. But over the years, I’ve played a good deal of golf at New Canaan Country Club, both with Mark and Steffi and with a women’s golfing organization that I belong to.

You came out of the University of Missouri in 1951 with a bachelor’s degree in journalism, and launched what would become a celebrated career as a financial journalist soon after. I’m curious to know what drew you to the study and field of journalism in the first place, and also what areas within journalism other than finance may have attracted you to reporting in the early going—community, sports, features, or something else—or was it always business and finance specifically?

Growing up in Cole Camp, Missouri, I did a lot of reading as a kid, and writing interested me, too. I also had a grandfather who wrote a novel—and perhaps that encouraged me to think I might write someday as well. It couldn’t have hurt that the best-known school of journalism in the U.S. is at the University of Missouri. As you noted, I graduated from there in 1951, with a Bachelor of Journalism degree. I can’t claim to have been wildly interested in business and finance when I was in college. But my first job (and only job other than at Fortune) was at the Maytag Company, where I was editor of a magazine for Maytag dealers. (Being editor of this 24-page monthly magazine meant writing everything in it, taking all the pictures with a Speech Graphic, and laying it out). So I ran around the country interviewing successful Maytag dealers and that’s when I got interested in business. And my experience at Maytag was valuable when I walked into Fortune looking for a job.

If you can, please share a personal experience or interaction with Warren Buffett that encapsulates the man, perhaps in a way that may surprise people.

One thing Warren loves to do is play bridge. He and I and two friends of ours play every Monday night online (we played last night, for example) and once a year I play duplicate bridge with him in Omaha just before his famous annual meeting is held. He’s slightly better than I am, so I’m always trying to raise my game when we play. But he makes mistakes now and then, and he always kicks himself when he does, because he’d like to be perfect if that were possible. But being perfect is not possible in bridge, and it’s certainly not in investments, either—though he comes awfully close to making it seem easy.

I’m going to try a technical question (though I have no background in finance, so please forgive me if this isn’t worded correctly). I’m looking at an article you wrote that was published in January 1970, on hedge funds. Part of it reads: “The 1969 experience has been a rude awakening for many hedge-fund investors, and has left some of them with strong reservations about the whole concept.” Clearly, hedge funds—or “hedged funds,” as Alfred Jones had coined (something you note in the article)—have become hugely popular in recent years, including among Fairfield County residents and professionals who work in the market. What idea could you have had 40, 50 years ago about the future popularity of hedge funds?

I wrote that 1970 article at the end of a period in which hedge funds had been wildly successful and, partly because of an earlier article I had written, had grown greatly in number. Then came the terrible market of 1969, in which hedge funds proved to be not very successful at a skill they were supposed to have: hedging. It was simply a time in which the whole concept of hedge funds was under examination—and rightly so. But, as everyone knows, hedge funds came through that period and entered a long span of years in which many attained enormous success.