A citizen-led campaign to create public bocce courts in New Canaan received its first formal approval this week, as parks officials green-lighted a plan to install two of them in a largely unused area past the little league fields and kids’ playgrounds at Mead Park. 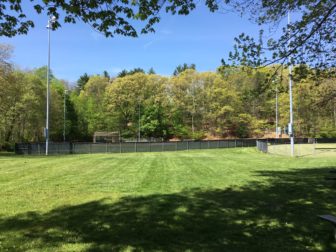 Here’s the area where two residents would like to install bocce courts. Credit: Michael Dinan

“In general it’s a nice social gathering,” John Howe, superintendent of parks for the New Canaan Department of Public Works, told members of the Park & Recreation Commission at their regular meeting Wednesday.

The 76-by-13-foot courts are “a good size bocce court for recreational use,” Howe said at the meeting, held in the Lapham Community Center.

“They’ll put two of them in, with a five-foot walkway between them and they’d be raised up some.”

The area in question, roughly beyond the left-field fence of Mellick Field and the right-field fence of Gamble Field—formerly site of the horseshoe pits, New Canaanites will recall—slopes somewhat and by raising the courts six inches or so, “we wouldn’t have any drainage issues,” Howe said.

Originally, the site eyed for the bocce courts was behind Lapham Community Center, but Mead Park emerged as a preferred option.

Buzzeo and Paglialunga offered to do the installation themselves, and the DPW would oversee that work, Howe said.

The project now must go before the selectmen, Board of Finance and Town Council.

Commissioners asked whether 76 feet is regulation size (it’s one of three, yes, but the larger 90-foot court is too big), whether the courts would be open to anyone (yes, though players need to bring their own bocce balls), how sign-ups would work when there’s a backlog (cross that bridge later, a nice problem to have), whether enthusiasts would show up with lawn chairs (they’d probably like to have a few benches and picnic tables, and the originators of the idea would be willing to supply those), whether there are lights for nighttime playing (not now though if it grows in popularity, it’s possible), whether the organizers have collected funds (not yet but they’re waiting for approval) and whether there’ll be a problem with New Canaan Baseball, whose little leaguers often warm up in the proposed area now (no, baseball said it’s fine with the bocce).

Commissioner Katie Owsley asked how the surface would stand up with kids from the playgrounds nearby monkeying around on it.

Recreation Director Steve Benko said the surface is processed stone that’s compacted, and Howe said “they could chew it up, but when it’s packed down it’s going to be very much like the hard-shoe tennis courts.”

“If they want to really dig they can, but it’s going to be very hard digging,” Howe said.