Advocates for the installation of bocce courts in New Canaan are now saying that a little-used area of Mead Park could be a better place for the popular game than the lawn behind Lapham Community Center. 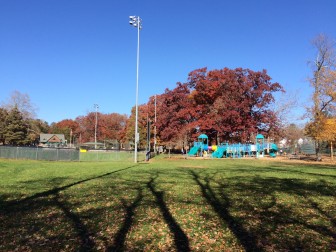 This area at Mead Park, in a little-used corner beyond the playground and right field fence at Gamble, now is under consideration for bocce courts. Credit: Michael Dinan

The area just beyond Gamble Field’s right field fence, for many years the site of horseshoe pits, could work better than Lapham in part because the bocce courts would be less conspicuous, according to Lenny Paglialunga, who presented the idea to town officials on behalf of his friend and fellow Dunkin Donuts morning crew regular John Buzzeo.

“The thing I like about being down in the park is it is sort of—not ‘out of the way’—but there are concessions and bathrooms down there and lights, and in my opinion I think it would probably be more used down there than up here,” Paglialunga told members of the Park & Recreation Commission during their most recent regular meeting, held Oct. 14 in the Douglass Room at Lapham Community Center.

The installation—originally proposed for an area behind Lapham, though it turns out the project could require the removal of the gazebo back there—would be completed by a private contractor and paid for by Buzzeo, Paglialunga said, who also would take responsibility for its upkeep.

Paglialunga said that at the moment, he’s working with Recreation Director Steve Benko to measure out the area at Mead and make sure it’s viable.

Though New Canaan Baseball Softball Inc. is planning a major re-grading and drainage installation of the little league fields adjacent to the proposed bocce area, that drainage system like will not solve the problem of water where the bocce courts would go. Instead, Benko said, the courts likely would need to be raised. They also would need to be covered when not in use so that children having fun on the nearby playground don’t try using it “like it’s a big sandbox,” Benko said.

Park & Rec Chairman Sally Campbell said that, once Paglialunga and Buzzeo are ready to make a formal request of the town, permissions would be needed to hire an outside contractor to do the job, and assurances would need to be made about maintenance.

Commissioner Matt Konspore asked whether Paglialunga had explored Kiwanis Park as a possibility.

“We want to try and reinvent Kiwanis,” Konspore said. “This may be the beginning.”

Noting that there’s a grass parking area with concessions in Kiwanis as well as bathrooms (but no lights), Konspore added: “If you build it, they will come.”

Benko raised some questions about the feasibility of using Kiwanis Park, noting that it closes at 7 p.m. in season, and someone needs to lock up the building there at nighttime.

Commissioner Laura Costigan said Mead Park would be a good location because of its proximity to residences and town.

“I could see people being able to walk [if the bocce courts were] at Mead Park, especially people living in the condominium areas down there,” Costigan said. “You might get more flow because of the walk-ability factor.”

Campbell asked whether Paglialunga envisioned the installation as a spring or fall project.

“We have no timetable whatsoever,” he answered.

Campbell said the bocce courts sounded “like a great idea.”

“We have to figure out where you best want it and if you can let us know all the pieces of who is doing what,” she said.

The commission’s next regular meeting is scheduled for Nov. 11.