The owners of a Locust Avenue home earned praise and approval from zoning officials Monday night after unveiling plans to replace an awkwardly positioned 3-family structure with a taller, 2-family house that encroaches on no setbacks. 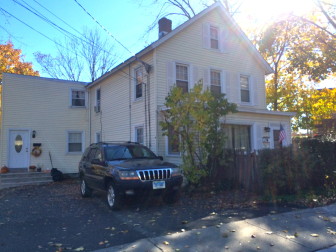 Chris Taroli purchased the .16-acre lot at 95 Locust Ave. for $500,000 in July, tax records show. The home there dates to 1880, according to tax records, though flat-roof additions have been added onto the side and back, it’s been “cut up in the middle” and when Taroli purchased it, the multifamily structure needed new HVAC, plumbing and electrical systems, had questionable foundations of rumble and unreinforced block and inadequate insulation, he told the Zoning Board of Appeals in a letter and at the group’s regular monthly meeting. 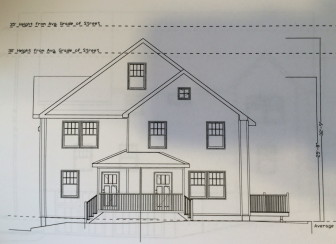 One rendering of the proposed new home at 95 Locust Ave.

The home also encroaches on all setbacks, and Taroli is proposing to build a new one that conforms in terms of those setbacks and coverage, though a variance is required because it would exceed allowable building height.

“We are hoping that by rebuilding the house, we are rebuilding something that is appropriate now,” Taroli told the Zoning Board of Appeals at the meeting, held in Town Hall.

“It will have a nice look to it. It will look very much like what is there. It will have more square footage but it will have a very similar look, but it will be much more conforming to the zoning laws that we have today. Because right now it doesn’t meet any of the setbacks in the property.”

It’s a difficult lot to build on, with a wedge shape that slopes about 13 feet from one corner to another, and abuts an apartment complex that includes several dozen units. Though technically the proposed building will be a 3.5- rather than 2.5 story home, care was taken in designing it to reduce the visual impact of the new elevation from the street, Taroli said. The required parking spaces additionally have been moved to the rear of the house a garage under where grade allows, he said.

ZBA Secretary Jeanne Rozel said: “They worked hard to make it [work]. It is going to be a nice improvement there.”

The group’s chairman, Carroll Yanicelli, said the design was the “best you could do” with the lot.

ZBA member John Mahoney said he appreciated that the pre-existing encroachments were being removed, along with the flat roof.

“That area is kind of coming up,” he said. This will add to it. To me there is nothing you can do with the lot other than leaving it as-is which is not optimal, or downsizing the size of the house.”

One unit in the house itself will serve as Taroli’s home with his wife, he said—the couple’s younger child is now out of the home and at college—and the other will be a rental in the short-term and could serve for his father-in-law down the road.

Asked whether it was possible to make changes to the building height so that no variance was required, Taroli responded that he’s trying to keep the ridgelines at the same 9-12 pitch as before, and added that because of topography, fencing and its parking lot, residents of the condo units behind will still see the home as if it were a 2-story dwelling.

Neighbors who were notified about the proposed new home expressed support, Taroli said.