Parks officials are weighing a request brought forward by two New Canaan residents who are seeking permission to create bocce courts behind the Lapham Community Center at Waveny. 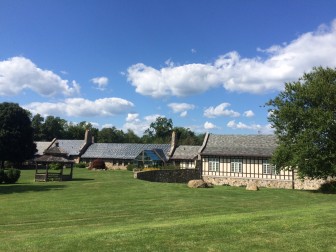 Residents are proposing to install a bocce court out back of Lapham Community Center. Credit: Michael Dinan

Edged by planks of wood, an approximately 10-by-60-foot “stone dust bocce court” would be paid for, built and installed entirely by John Buzzeo, who brought the proposal forward with fellow New Canaanite and Dunkin Donuts morning crew regular Len Paglialunga, according to Recreation Director Steve Benko.

“He would build it at no cost to the town,” Benko told the Park & Recreation Commission at its regular monthly meeting, held in the Douglass Room at Lapham Community Center.

Buzzeo, a career builder, originally had thought about the area by Gamble Field at Mead Park where the horseshoe pits used to be, but found it likely would be too soggy to use, Benko said.

An area between the gazebo behind the community center and the main building itself could be a good location, Benko said. Though early, the idea has support from Town Councilman Penny Young and Lyn Bond, director of Lapham, he said.

Commissioners asked how equipment would be secured (people bring their own), how many people play bocce at a given time (generally two teams of two players), how much it would cost to restore the grass should bocce fail (perhaps $2,000) and how it would be incorporated into existing programs (a bocce kit at Lapham now gets regular use).

Benko noted that some New Canaanites and Lapham regulars already participate in bocce leagues at Scalzi Park in Stamford, and another runs at Calf Pasture in Norwalk.

Park & Recreation Chairman Sally Campbell asked whether the proposed area could be staked so that commissioners knew exactly what the residents had in mind, and said the group would get more questions answered and investigate further prior to addressing the matter at its next meeting.

“It’s important that we go into all these things with our eyes open” and “it’s important to go look at what we are thinking of doing,” she said.

The Park & Recreation Commission is scheduled to meet next on Oct. 14.