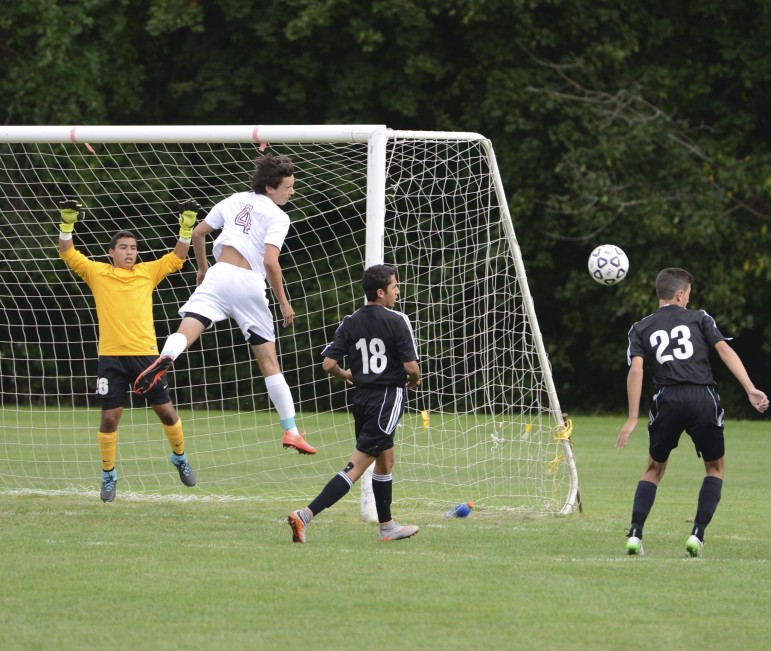 Alex Dolby was active all day on both ends of the field on Tuesday against Trumbull. Here he is after another header. Credit: Christine Betack 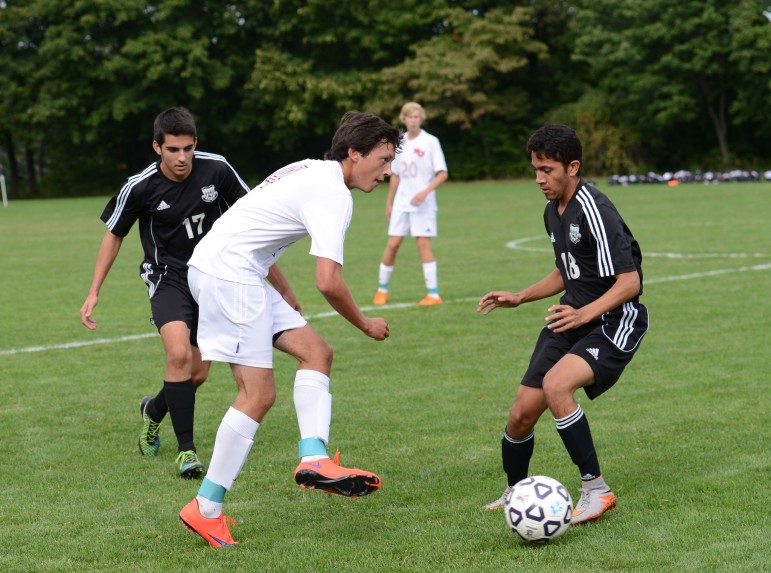 Alex Dolby and teammates celebrating his goal that put the Rams up 3-0. Credit: Christine Betack

Chris Harte connecting on a header to help New Canaan's offense. Harte also contributed to the goal scoring when he put the Rams up 2-0 early in the second half. Credit: Christine Betack

Senior co-captain Brett Capone possessing the ball with the a 3-0 lead and time winding down vs. Trumbull. Credit: Christine Betack 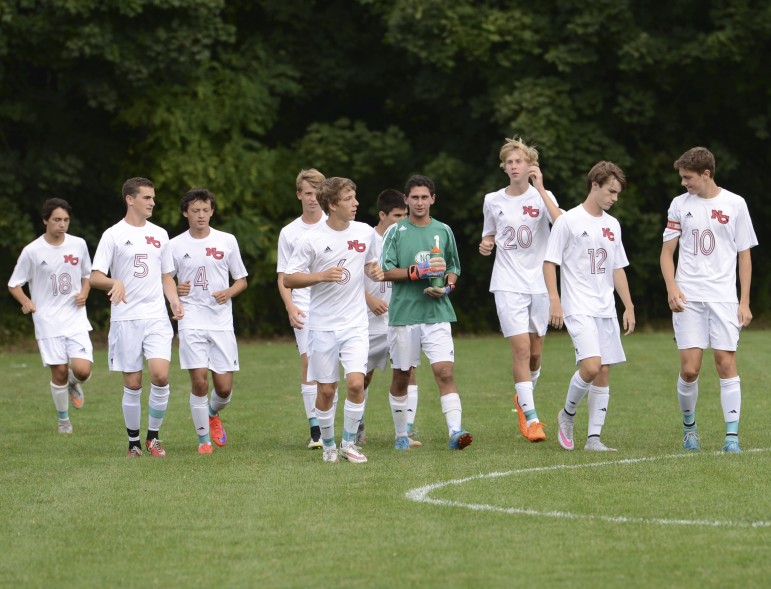 The boys soccer team prior to the start of their game Tuesday afternoon vs. Trumbull. Credit: Christine Betack

Early on this season for New Canaan boys’ soccer, getting a lead has not been a problem, as they have been in front in each of their first four games—the problem had been keeping them.

But after Vinny Altamura put the Rams on the board early in the first half, strong defense helped New Canaan (2-2-1) hold onto its lead. Then the boys of Conner Field added to it by scoring twice off of two spectacularly executed corners in the second half to defeat the Trumbull Golden Eagles (2-2-1) 3-0 in a pivotal early contest in the FCIAC standings.

“I thought we were brilliant for the way we set up,” head coach Rich Sutherland told NewCanaanite.com. “We frustrated Trumbull, who probably had close to 80 percent of the possession and I thought were very good, probably the best team that we’ve played so far. We just frustrated them and gave them very, very little space, restricted them to long shots which we were happy with. We managed to get the first goal, managed to put them into making a mistake that led to the first goal then added another two in the second half. For us, the way we prepared worked out. I couldn’t be happier for the boys.”

It didn’t take long for the Rams to grab the lead. At the tail end of the 9th minute, junior Hugo Potter intercepted a Trumbull pass and immediately sent the ball upfield to Altamura, who was breaking past his defender. Once in possession of the ball, Altamura struck from eight yards out to give New Canaan the early 1-0 edge.

The Golden Eagles fought for an equalizer, and almost found one when a pass found midfielder Elvis Rodriguez sprinting toward the net with only Rams goalie Sam Stoner standing in his way. From point-blank range, Rodriguez kicked it right at Stoner and the keeper made an incredible stop to keep Trumbull off the board.

But a 1-0 lead was nothing to feel comfortable about, so New Canaan took to the field in the second half poised to strike early, and that’s exactly what they did.

In the 11th minute of the half, Capone sent a corner kick toward his teammates charging at the net. The feed went off senior defender Alex Dolby’s head and straight down off the ground, then straight up off the crossbar. But before the crowd could take a breath, the rebound found junior defender Chris Harte’s foot, who put the ball in the back of the net then charged back upfield celebrating a 2-0 lead with his teammates.

“I knew [Alex] Dolby was going to make the right play there,” Harte told NewCanaanite.com. “So after it hit the crossbar I saw it bounce off the defender and I just took my chances. It wasn’t the best shot, but it went in.”

Five minutes later, New Canaan made it 3-0 when Dolby, connected on a header off of Capone’s pass. 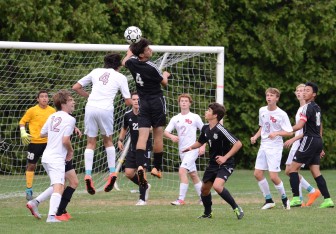 Alex Dolby (#4, white jersey) prepping to connect on a header for the Rams third goal of the afternoon. Credit: Christine Betack

“Being a defender, every time there’s a corner kick I try to make something happen,” Dolby told NewCanaanite.com. “So I just go to wherever the ball is and try to get a head on it. That’s my objective.”

Corners turning into goals is something that every soccer team works on in practice. However, every coach likes to see their team make it work in games as well.

“It’s good to see those set pieces [corners] that we work on pay off,” Sutherland said. “The keeper made an unbelievable save in the first half off one of our corners, so today it actually came together. The delivery was good, the movement was good. In the end I thought we were deserving of this W.”

With 16:45 remaining, Trumbull had what turned out to be their final attempt at spoiling the shutout with senior forward Arin Lara streaking down the middle of the field all alone. However, senior co-captain Griffin Paterson, who played the entire second half in net, would have nothing of it as he sprawled out to his right to block Lara’s strike on net and preserve the three-goal lead.

The effort from New Canaan’s defense for 80 minutes held Trumbull to putting just a few quality scoring chances together.

“Starting from our striker all the way back—we had to be because when you’re playing a team like Trumbull, you can’t switch off nor let them run behind you cause if you do they’re going to punish you,” the coach said. “The back four were excellent; the midfield as well. I just thought all around it was an excellent performance with everyone playing their part. For me, the boys can be pleased with that [win] because that’s a very big result for us and a very big performance.”

The boys hope to carry the momentum from this important win onto their next game, Friday at 4 p.m., when the venue shifts to Dunning Stadium and their opponent is Westhill.