Bookmark this article for Tuesday, when NewCanaanite.com will post regular updates on voter turnout and results as numbers come in on Election Day.

[ELECTION RESULTS CAN BE FOUND HERE.] 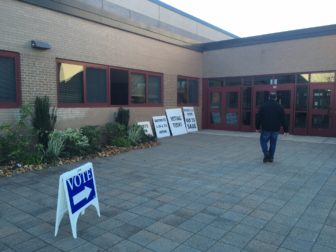 Moments ago, New Canaan surpassed its 2012 total for votes cast by local electors. Stay tuned for a standalone article with final results from New Canaan, and beyond.

As of 3 p.m., a total of 8,491 New Canaan electors had cast ballots—about 78 percent of the total number of voters who exercised their rights during the 2012 national election.

As of 1 p.m., more than half of New Canaan’s registered voters had cast ballots (see table below). The total figure, 7,491, also represents 68 percent of all ballots cast in the 2012 election—a tally that the town is sure to surpass.

As of 11 a.m., more than 43 percent of registered voters in New Canaan had cast ballots, officials said (see table below). 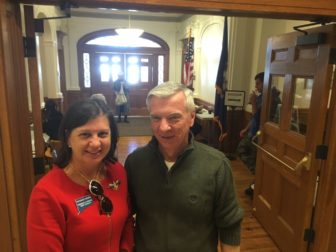 “Everything has been very busy at all of the polls,” Redman told NewCanaanite.com. “At 6 a.m. this morning, there were lines, which is very unusual in New Canaan—to have lines out into the parking lot to come in and vote.” 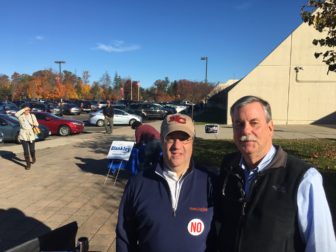 Wearing a red-lettered ‘No’ button on his jacket, First Selectman Rob Mallozzi on Tuesday morning stood at a table outside New Canaan High School, where District 1 voters cast ballots on Election Day.

He was encouraging electors to vote against a recommendation for Question 3 on the Town Charter recommendations, which would remove the first selectman from the role of chairman of the Board of Finance.

“There has been incredible enthusiasm,” said Mallozzi, who added that he had been at the location since 5:55 a.m., just before polls opened. “A lot of people seem to be educated on this issue in particular, and seem to have their minds made up on that issue.”

Mallozzi said he paid for a townwide robo-call on the issue, which went out Monday.

Here’s a look at voter turnout in New Canaan in the most recent national election year:

Here’s a voter registration summary of New Canaan, from the Registrar of Voters:

Here’s the final report of the Charter Revision Commission.

Here’s a sample ballot. (Note: This sample ballot from the Connecticut Secretary of the State is incorrect—Hector Lopez is running for the 125th state House seat only—and is only reproduced here to orient voters to the layout of the ballot with the Charter revision questions on it):