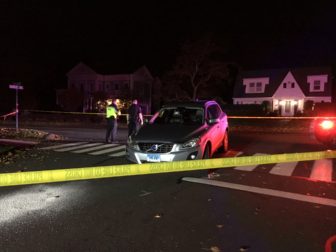 An SUV remained in the roadway on Monday night while accident reconstruction experts arrived at Harrison and South Avenues, where two pedestrians had been struck by the vehicle. Credit: Michael Dinan

New Canaan Police received a call about the incident at 6:21 p.m., according to Lt. Jason Ferraro, the department’s public information officer.

Both pedestrians were transported to Norwalk Hospital’s Emergency Room, Ferraro said in a press release. Their condition was not immediately known.

At about 7:40 p.m., an accident reconstruction unit from the Darien Police Department arrived on the scene.

Police cordoned off the very top of Harrison Avenue to both foot and motor vehicle traffic with yellow tape, and a silver Volvo CR60 could be seen stopped in the road, as though it had turned off of South Avenue onto Harrison. A drying agent could be seen scattered about the roadway about 10 feet in front of the car (see photo above).

It isn’t clear just how the collision unfolded or whether police with bring charges. Ferraro said it’s under investigation.