For locals Jeff and Beatrice Mellick, the sustained heat of late June and July has delivered more than drowsiness, discomfort and thirst.

The founders of Beachmate say the “dog days” have been advantageous for the growth of their young company, now in the midst of its first summer.

With predominantly online sales of their all-in-one beach system for families, the Mellicks say they are building a following through social media platforms including Instagram, Facebook and “Mommy Bloggers.”

Seventy percent of sales are local to the tristate area, according to Jeff Mellick, a 1993 New Canaan High School graduate—with the balance scattered across the nation. Two of the most popular products are Beachmate itself ($98.50) and the Turkish Towels ($38), he said.

Launched on March 15, Beachmate experienced “a little quiet” this May and June, but sales are now picking up “big time,” according to Mellick.

“We’ve had a lot more success since mid-June, directly related to schools getting out,” he said.

Beachmate has seen other prominent businesses buying in bulk. In June, Beachmate announced a partnership with Vineyard Vines, and the product will be featured in 10 different stores.

“The biggest surprise is how much interest we’re getting from hotel amenity programs,” Mellick told NewCanaanite.com. “They purchase big quantities for guests arriving with children to use at the hotel, not for resale.” 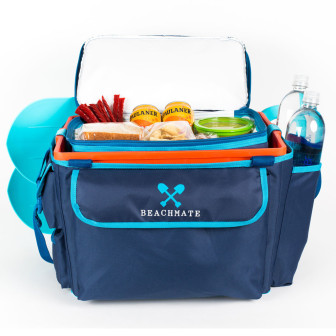 The Beachmate System includes a set of durable plastic buckets and shovels as well as a cooler, all wrapped in a tote bag (insignia optional) with a shoulder strap—and it weighs under eight pounds. It is designed to reduce the stress of beach days by “eliminating superfluous baggage, helping parents stay relaxed and organized,” Mellick said.

Laura Budd of the chamber said, “We’re so proud to have a homegrown business like Beachmate join the chamber and participate in the sidewalk sales. We love their entrepreneurial spirit.” 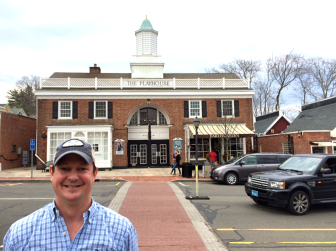 The chamber’s executive director, Tucker Murphy, commended the Mellicks for their ability to market their brand.

“They understand that to market yourself you have to be involved in different types of promotion, different ads and events,” she said.

To assist with this promotion by improving the design and website, Beachmate has partnered with local brand marketing business Nurenu, which Mellick described as a “positive experience” and a “great helping hand.”

Since leaving his Wall Street job to pursue Beachmate, Mellick said he has found both disadvantages and advantages of being such a unique product on the market.“There is no competition, but we have to educate the market as to why they need higher quality beach equipment.”

The answer to “why” is to increase kids’ enjoyment and parents parents relax—as the motto—“Made for kids … Built for Parents”—states. Families can avoid using huge beach carts on wheels that are inefficient on sand and minimalize what they have to carry. 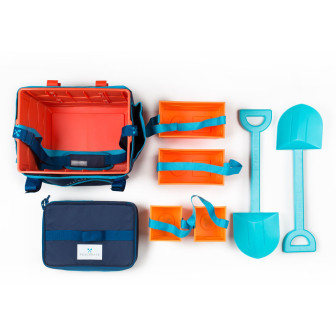 Despite the name ‘Beachmate,’ the Mellicks’ customers have found versatility in the product beyond the beach.

“The most interesting thing is the many different ways people use it, not just at the beach with little ones,” Mellick said. “We’ve received photos [of customers] using it in the snow, as a cooler, camping and even hiking mountains in Hawaii.”

The feedback from these customers has been “overwhelmingly positive”, Mellick said, with “no pushback” on the price point.

While Jeff made a monumental life decision to leave his Wall Street job, he commends his wife Beatrice for her lifestyle change. No longer a stay-at-home mom, Beatrice is now among the “mom-preneurs” of New Canaan.

“She spends so much of her time running this company, and it’s so amazing to work with your wife who traditionally has been a stay at home mom but is now helping me run a start up in every aspect of the business,” Mellick said.

Beachmate is a family business in every sense; Beatrice and Jeff are expecting their fourth child.

“I wouldn’t have thought this was where we would be today—we went full-time with a six month old and are having another,” Beatrice Mellick said. But, she added, “It couldn’t be a better time in general for the economy and for women in small business start ups.”

The Mellicks have been successful in their first summer, and view this season as learning experience for the future. “It will be nice to get through the first summer, see the fantastic response and what angles have done well, to keep moving forward,” Beatrice Mellick said.