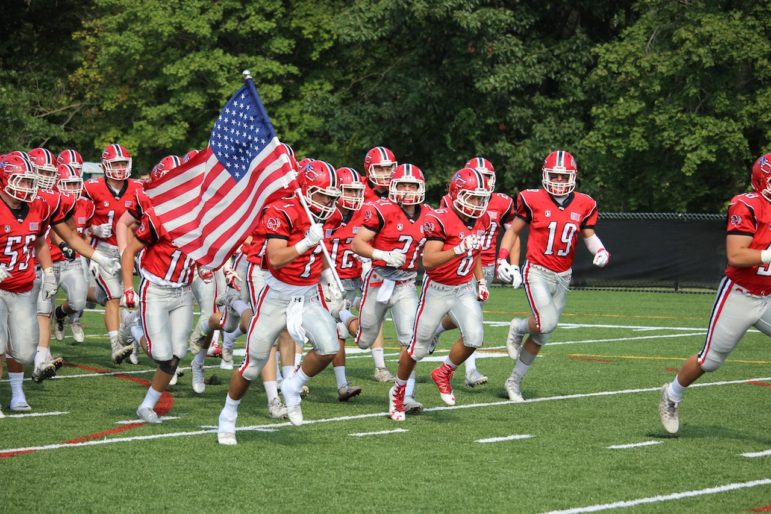 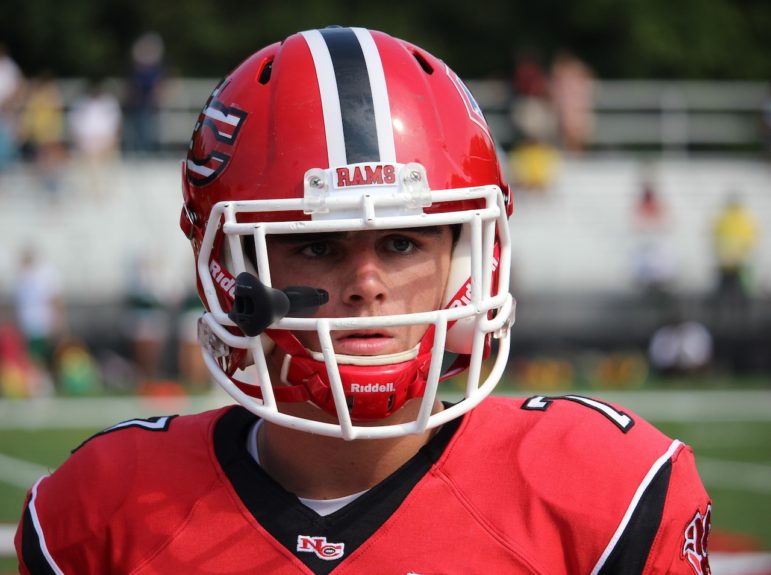 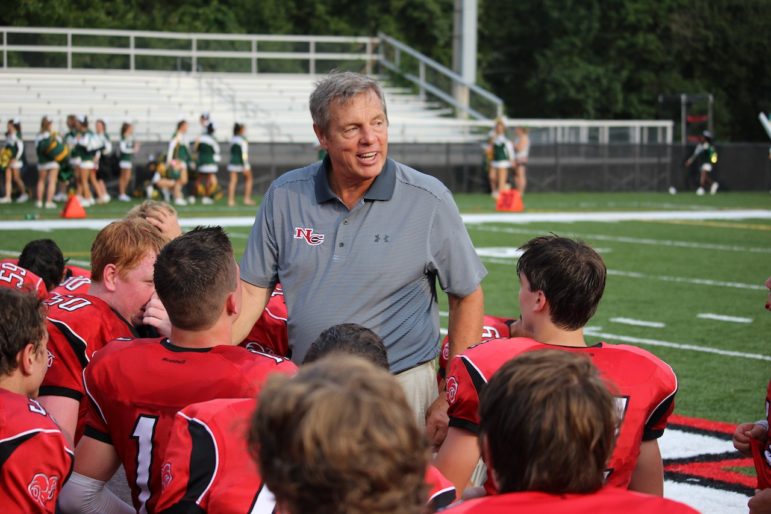 It wasn’t the prettiest of wins, but Lou Marinelli will take it.

Tested by a tough, underrated Trinity Catholic squad Marinelli’s New Canaan Rams—buoyed by a spectacular defensive performance—escaped their season-opener at Dunning Field with a hard-fought 20-6 win over the Crusaders.

“Thank God for our defense, thank God for (defensive coordinator) Chris Silvestri, they did a tremendous job,” Marinelli told NewCanaanite.com. “The best thing I can say is that we were stymied. Thank God for some heroics by some kids who came up big.”

One such hero was New Canaan linebacker James Freyre.

With the Rams clinging to a 13-6 lead early in the fourth quarter, Freyre returned an interception 28 yards for a New Canaan touchdown. The senior captain’s pick-six extended the lead to 20-6 and gave the Rams (1-0, 1-0 FCIAC) some much-needed breathing room at a critical juncture in the game.

“When your captain comes up and has a big play like that it shows great leadership,” Marinelli said.

In contrast to the defense—which held Trinity (0-1, 0-1 FCIAC) to just 154 yards of total offense and had five takeaways on the afternoon—a penalty-laden (11 flags for 100 yards) Rams offense seemed out of sync, struggling to find a rhythm and consistency behind a carousel of quarterbacks.

“We’re trying to see which guy is going to step up and be the leader,” Marinelli said. “I don’t know if we’ve found him yet. We’re a little bit closer than where we were and we have to go back and evaluate what we’re doing.”

Senior James Crovatto started the game but was unable to conjure up much of a vertical attack. New Canaan punted on its first possession and after an interception by senior captain Ryan O’Connell set the offense up on the Crusader 20-yard line, a fumble gave the ball right back to Trinity as the scoreless first quarter wound down.

Freshman Drew Pyne came in next, making his high school debut in New Canaan’s first possession of the second quarter. Pyne was able to lead New Canaan down the field, converting two third downs with a 14-yard hookup to senior Jack Hoelzer on third-and-3 from the New Canaan 38, then with a 34-yard strike to O’Connell on third-and-10 at the 37.

One play later O’Connell ran it in from the 3-yard line for a touchdown and a 7-0 New Canaan lead with 9:12 left in the half.

From there, both defenses took control as the teams traded punts and interceptions for a stalemate into halftime.

After forcing a New Canaan three-and-out to start the second half, Trinity mounted it’s first—and only—scoring drive of the game. The Crusaders converted four third downs as they marched 67 yards in 8:57, capped off by Frank Alfano’s two-yard TD plunge to pull to within 7-6 of the Rams. A failed two-point conversion allowed New Canaan to retain the lead with 1:48 left in the third quarter.

With senior Spencer Williams—the third New Canaan quarterback of the afternoon—under center, the Rams managed to move into Crusader territory. New Canaan was helped by a huge Trinity unsportsmanlike penalty to negate a defensive stop that would have given the Crusaders good field position.

Instead, the penalty factored in perhaps the biggest play of the game.

One play later O’Connell ran it in for his second touchdown of the day, extending the New Canaan lead to 13-6 with 10:38 left to play.

On the next Trinity possession, the Crusaders were faced with a fourth-and-2 from their own 28. Sensing the urgency and perhaps feeling confident in short-yardage situations—given their success in the previous drive—Trinity head coach Donny Panapada decided to go for the first down instead of punting.

Trinity quarterback Nick Granata floated a pass over the middle, which was picked off by Freyre, who returned it for a touchdown and a 20-6 New Canaan lead.

“I recognized it, took a few steps out and went in my drop and the ball went right to me,” Freyre said. “The first high school touchdown is always pretty special. I wasn’t really sure what to do.”

Trinity wasn’t done yet, driving to the Rams 23-yard line on their next offensive series. However, a desperation heave by Granata on fourth-and-7 was intercepted by O’Connell at the 10-yard line, ending the threat with 6:18 left in the game.

From that point, strong running by New Canaan senior back Graham Braden—behind the blocks of offensive linemen Teddy Hood, Will Conley, Jack Conley and Will Ahrens—helped burn the clock, ultimately sealing the gritty win for the Rams.

“We have a lot of work to do, but we got out of here without a loss,” Marinelli said. “We christened the new turf, which I thought was great. Next week we have the flying circus coming (Ridgefield High School), so we’ll see what happens.”