For New Canaan Police Chief Leon Krolikowski, a town resident, father and U.S. Marines veteran, no words or ceremony could replace the losses that our nation suffered in the Sept. 11, 2001 terrorist attacks. 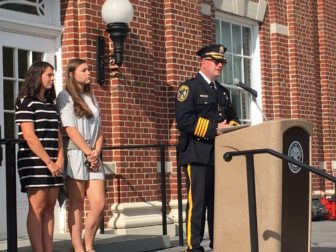 New Canaan Police Chief Leon Krolikowski addresses a small crowd gathered out front of Town Hall on Sept. 9, 2016 during a memorial service for those lost during the Sept. 11, 2001 terrorist attacks. The police chief said during his remarks that those who have given their lives for the United States during the subsequent War on Terror also are remembered. He is joined on the front steps of Town Hall in this photo by New Canaan High School juniors Caroline Callahan and Cassidy Little, who sang a lovely rendition of “God Bless America.” Credit: Michael Dinan

What we can do, Krolikowski told those gathered in front of Town Hall on a hot and humid Friday morning, is “reflect, and honor each day those we have lost—and we must never forget.”

“The most fitting ceremony for the lives lost on September 11 is not etched on the memorial across the street,” Krolikowski said during a solemn memorial ceremony honoring those lost on 9/11, referring to a 16-foot section of steel column from the core section of World Trade Center Tower One on the 99thfloor—just above the impact point of United flight 175—that stands outside the New Canaan Firehouse.

“And is not the ceremony today, but it is etched in our hearts as we enjoy the freedom that was made possible by the grave sacrifice of the many lives that have been lost from September 11th forward. Let us never forget.” 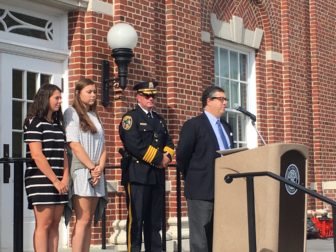 More than 50 people, including many in New Canaan Police, Fire and Volunteer Ambulance Corps uniforms, and town employees and officials, gathered for the annual ceremony. It included an invocation and benediction from the Rev. Eric Dupee of the Congregational Church of New Canaan, posting of colors by the New Canaan Police Department Honor Guard—Officers Ron Bentley, David Payne and Jason Kim—Pledge of Allegiance and singing of “God Bless America” by New Canaan High School juniors Caroline Callahan and Cassidy Little (see video above).

The three town residents who died in the attacks that day— Joseph Coppo, Bradley Fetchet and Eamon McEneaney—each were remembered by name by Krolikowski during his remarks, and additionally were honored in two specific ways, with the placement of a memorial wreath outside the 9/11 memorial at the firehouse, including three white carnations representing each man, and the ringing of the fire bell “5-5-5” three times, again one for each New Canaanite lost. 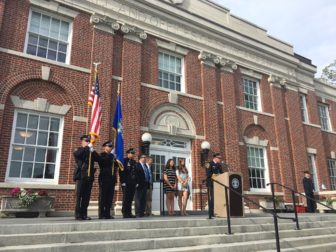 First Selectman Rob Mallozzi said during his remarks that he was “struck by two emotions, one profoundly sad and the other inspirational.”

“Though it has been 15 years, the same gut-wrenching heartache remains for many of us who lost friends and family in this senseless terrorist act,” Mallozzi said. “Our community lost engaged residents who volunteered in our sports programs and our churches, and made a difference to the quality of life here in New Canaan. And much, much worse than that, their families were deprived of the loved ones with whom they should have shared so much joy and happiness over the last 15 years. Secondly, I am forever impressed by the dedication of our own emergency services providers and what they have shown. Men and women of our police, EMS, fire and CERT organizations—volunteers and paid alike—we are forever in your debt. The knowledge that many were motivated specifically by the cowardly acts of 9/11 to join the emergency services or to re-dedicate themselves to public safety is a shining light at the end of a tunnel for me. My thoughts are with all of us on this sad occasion.”

Krolikowski said that 9/11 “forever changed our world” just as Pearl Harbor Day did for the Greatest Generation on Dec. 7, 1941.

“Although it was 15 years ago, it feels like yesterday for many of us,” the chief said.

“September 11th has shaped who we are, how we live and what we believe in,” he said. “On September 11th, terrorists attacked our great nation and took the lives of 2,986 men, women and children who were living their lives on a typical Tuesday morning. They were bankers, pilots, flight attendants, mothers, fathers, brothers, students, sisters, children, police officers, firefighters and EMTs who took an oath to protect, no matter how great the risk.”

Krolikowski said that New Canaan also remembers “the 6,831 brave servicemen and servicewomen who selflessly served our country, and gave their lives to the War on Terror, which began on September 11th and continues to this day.”

“We must never forget,” he said.