The team has 17 returning players, “all of whom are capable of contributing,” Bamford told NewCanaanite.com.

“We have our four captains who are instrumental to the team, along with the other seniors, 10 of whom [in total] are back from last year. It’s a great group, very experienced with a great attitude.” 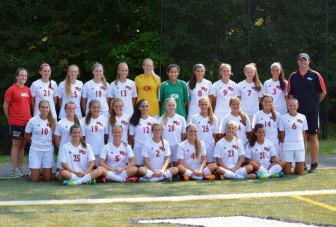 Those four senior captains are midfielder Sami Stewart, defenders Mia Carroll and Caroline Gordon, and goalkeeper Katie Donovan—a quartet with more than a decade of experience playing together, which bodes well for the 2015 Rams squad. 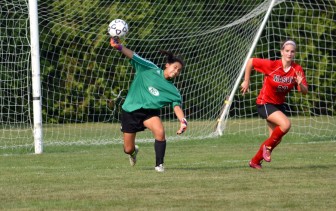 “We’ve all been playing together since kindergarten,” Carroll told NewCanaanite.com. “So it’ll be really fun just to finish off our last season with people that we’ve been with for so long.”

Stewart added: “The best part about being on this team is the tradition. Since we all were freshmen we really looked up to our seniors and looked to them for guidance, both on and off the field. I feel really lucky because of that. Hopefully a few of the freshmen are looking up to the four of us this year, and we’ll keep that tradition going. Because we’re all a family, this season is definitely going to be one of the best.” 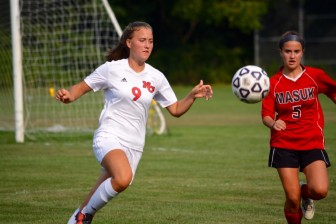 With an 8-5-3 regular season record in 2014, the team qualified for both the FCIAC and Class L state tournament, upsetting each respective No.1 seed during them. And while those runs didn’t end in championships, the program is poised to build off of last season’s successes.

“I’m looking forward to competing in FCIAC’s and States [again],” Stewart said. “I feel that our team has a good chance of going far, as long as we work hard and really come together this season. If we do, I feel like we can definitely get a few wins in those.” 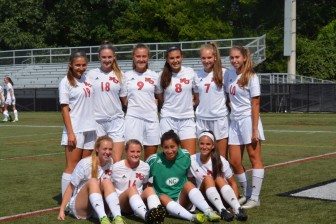 It will take repeat performances of those games from the likes of the keeper Donovan, who’s entering her third year as a starter, as well as her fellow captains and teammates.

And on defense, forming a formidable unit in front of Donovan, are Carroll and Gordon along with fellow seniors, Ellie Aliapoulious, Schuyler O’Mahony and Ali Deambrosio. 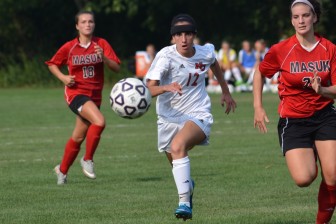 The veteran roster’s depth should afford Bamford some flexibility in mixing and matching to find a winning formula, with the luxury of calling on the bench late in a contest to bring on an experienced player.

“I’m hoping that the girls are going to push on from where we left off last season, with a bit more confidence and experience,” Bamford said. “And with the sprinkling in of a couple new players, I think we’re going to be a very competitive team this season.”

That confidence and experience is key: Standing in the way of the Rams and their goals will, first, be the vaunted FCIAC. In 2014, five of the six teams in the East division (New Canaan included) made up the eight-team FCIAC tournament field.

And while New Canaan’s win in that tournament was over the top-seeded St. Joseph’s Cadets, this year’s squad knows how beneficial it would be to get off to a strong start in order to set the right tone for the 2015 season.

“It’s going to be competitive as it always is,” Bamford said of the FCIAC. “But again, looking where it’s at, the top three-quarters of teams in the FCIAC will be competitive every day—so that’s what you got to be prepared for. Every game’s going to be a tough game. We just have to take it one game at a time, look out for each other, do our jobs and hopefully we’ll be on the right side of the results.”

Keeping in mind the chemistry aspect to this team, the experience they have together promises to give this team an advantage against its competition from the get-go. That excites many who are awaiting to watch this squad in 2015, and also excites senior co-captain Gordon and her coach.

“I’m really looking forward to seeing our team chemistry at work,” Gordon told NewCanaanite.com. “We all get along really well. With 10 returning seniors this year, and all of us having played together since we were little, I’m looking forward to finishing off my last year of playing with them.”

Said Bamford: “The fact that so many of them have been together so long as a group, that makes it slightly more special than normal. And all of them are going to contribute, consistently, hopefully, throughout the season which makes it a unique scenario in that respect. I’m looking forward to continue working with them. I’m very confident and very enthusiastic about this season.”

The girls’ season gets underway on Saturday, September 12 at Conner Field against Stamford at 4 p.m. Here’s the team’s full schedule: