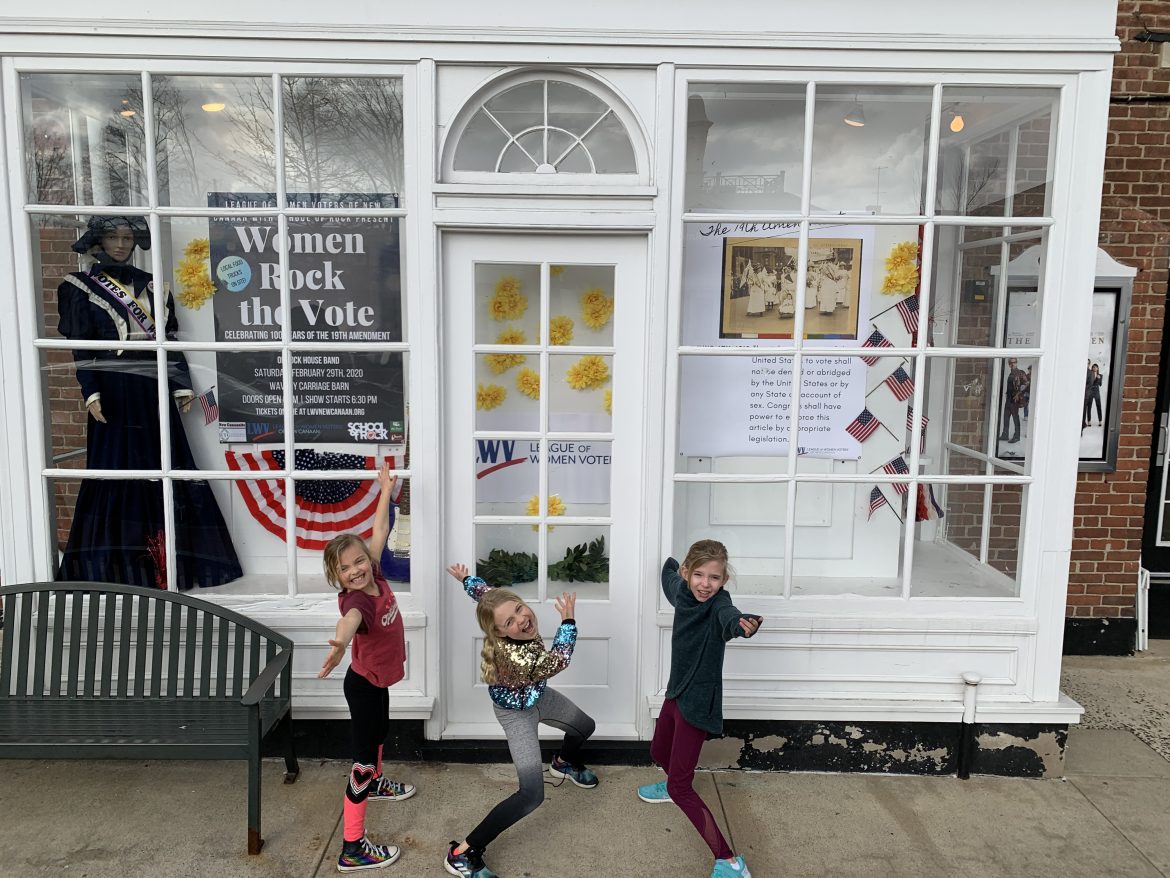 L-R: Teagan Kosche, Sagesse Kosche and Nairn Neilson stand before a "Women Rock the Vote" display in a display window at The Playhouse on Elm Street. Contributed

A long-established New Canaan nonprofit organization is marking a major anniversary with a community event this month that’s designed to be inclusive and affordable.

The League of Women Voters of New Canaan is celebrating the centennial of the 19th Amendment’s ratification—the U.S. Constitution amendment that says state and federal governments cannot deny people the right to vote based on sex—with “Women Rock the Vote.”

To be held starting at 6 p.m. on Saturday, Feb. 29 at the Carriage Barn in Waveny, it will include local New Canaan Bands—the house band from the New Canaan School of Rock, Rock Paper Soul and Bad Dog Buddy—and drinks will be provided as part of a $30 ticket for those 21 and older ($20 tickets for all others).

“We want people thinking it only has ben 100 years [since women got the right to vote] and this is a huge achievement and let’s celebrate this and get people to learn more about what the League of Women Voters does,” Bates-Mason said.

The national League was formed in 1920, she said, while the New Canaan chapter formed about 20 years later.

“We wanted something that will be fun, a celebration,” she said. “It is a fundraiser [for the League], but we wanted it to be fun and also inclusive. A lot of these events are like $250 and there is merit to those, but we wanted parents and kids both to be able to go.”

Funds raised through the event support the League’s initiatives, such as its “Know Your Representatives” guide that is mailed out to local households.

“We are excited to be a part of this celebration marking such an important milestone,” said Doug Stewart, vice president of Walter Stewart’s. “When Robin Bates-Mason and the League of Women Voters asked for our support we were honored to be included.”

“Women Rock the Vote” is being featured through a window display outside The Playhouse on Elm Street. Tickets may be purchased through the League’s website.

The organization will have information for attendees about what the League does and how to register to vote.

“We’ve had people ask, ‘Can I dress up like a suffragette?’ ” Bates-Mason said. “We are saying sure, go for it if you want.”