The beginning of Mark ‘2-5-0’ Rearick’s journey to receiving the nickname that would stick with him for the next 50 years was, of all places, a hospital bed in the Rearick household where the man would spend 10 weeks reviving an injured back from shoveling snow after his freshman football season in 1963.

It was during this period of rest when the former 6’ 3’’, 180 pound wide-receiver would become a 240 pound lineman. And it was this surprise transformation that would lead then head coach Joe Sikorski to give Rearick the name ‘2-5-0’ when he returned to football the following season. After teammates Milt Word and Dr. Timothy Empkie eventually started calling him the name, Mr. Rearick would be known from then on to everyone simply as ‘2-5-0.’ 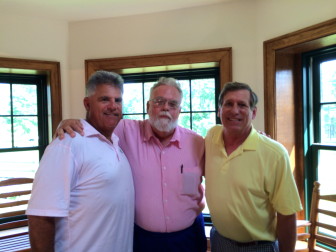 While talking with ‘Fiver’ about his nickname at a sunlit table in the Waveny Paddle Tennis Lodge on Saturday afernoon, Mr. Rearick said that he loved his new name because it was distinctive and people began to know who he was. He also admitted that one of the only people who was not a fan of his new moniker was his mother, who told him that the reason she named him ‘Mark’ was because it was almost impossible to make a nickname out of it.

Mr. Rearick is a legend in every sense of the word. A 1967 graduate of New Canaan High School, Mr. Rearick has spent his life affecting the lives of everyone around him in a way that leaves anyone who meets him in awe of his humor, intelligence and kindness.

One of these many people was son of coach Joe Sikorski—and co-creator of this farewell party with Dave Benko—Brian Sikorski. “I remember him as being just a great guy. Friendly, funny, and a very smart, very well-thought out guy that was great to be around,” Mr. Sikorski told NewCanaanite.com. 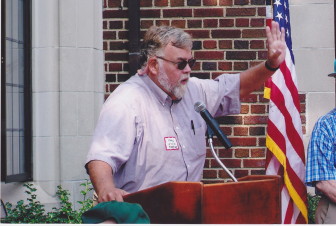 Mr. Sikorski also noted that one of the biggest misconceptions about ‘2-5-0’ was that his size was the only attribute to Mr. Rearick’s athletic ability. “What’s interesting about him,” Mr. Sikorski said, “was that even though we joked and called him ‘2-5-0,’ he could run like the wind. He had great, great feet for a big man.”

Mr. Sikorski also recalled playing with ‘Fiver’ in an “After-Five” League put together by his father. He remembered specifically a time when his dad would try to get an upper hand, much to the discontent of ‘2-5-0’: “He used to drive Five crazy because my Dad would call a foul on Fiver when it really wasn’t a foul. But he couldn’t do anything about it because my father was the coach,” Mr. Sikorski said with a chuckle. “He would always be shaking his head with steam coming out of his ears but again he couldn’t do anything about it because he was the player and my dad was the coach so—it just wouldn’t work that way.”

Following his retirement from NCHS, Mr. Rearick looks forward to spending his time doing “a whole lot of nothing” 15 miles south of Wilmington in his new North Carolina home. At the same time, he plans on traveling and seeing a variety of college baseball and basketball games at the nearby University of North Carolina Wilmington while enjoying the more moderate Carolinian climate.