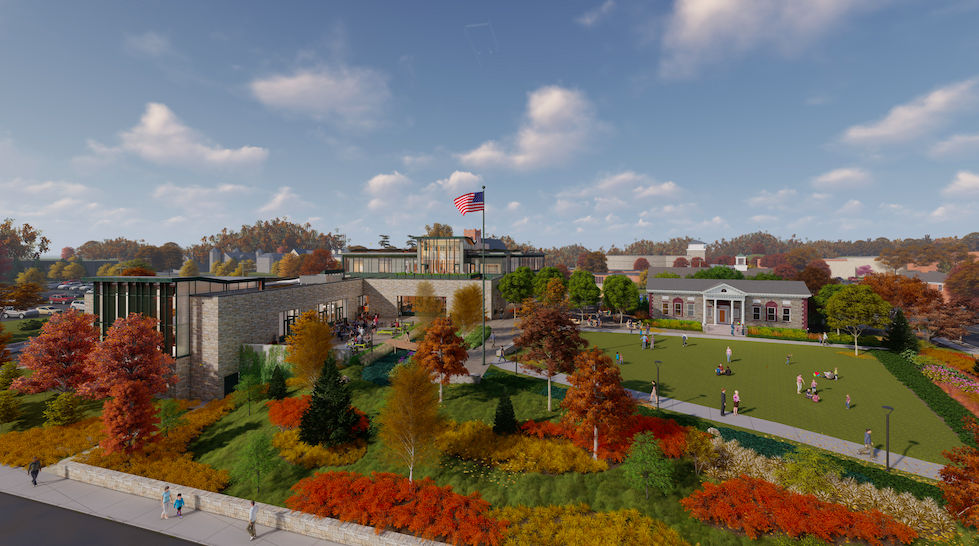 New Canaan Library officials said Tuesday that unless their organization is able to secure funding to move the original 1913 building to the western edge of its campus—as conditioned by the Planning & Zoning Commission via approvals last July and December—they could end up with two facilities, the present-day library and a new one, sitting next to each other.

The library has already has raised more than $33 million toward its new approximately $40 million building, including a $10 million gift from the town, Executive Director Lisa Oldham told members of the Board of Finance at their regular meeting, held at Town Hall and via videoconference.

Yet the library sees the P&Z-approved project of preserving and moving what remains of the 1,200-square-foot 1913 or “legacy” building as a separate project, and need $1.5 million now in order for that structure to be secured on a new foundation behind the Sunoco gas station by the time the new facility opens to the public Feb. 1, 2023, Oldham said. (A further $1 million will be needed to fit out the building for use, such as by getting insulation, heat, bathrooms and plumbing in it.)

Asked by Board of Finance Chair Todd Lavieri how the library is going to get the $1.5 million, Oldham said, “That is a good question.” 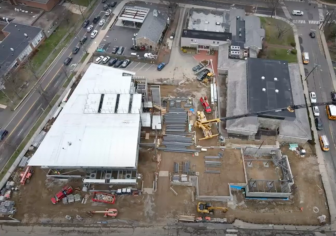 Drone view of new library under construction (lower left) and existing library (top right). From April 12, 2022 Board of Finance meeting

“As our primary investors, our biggest investor, you will appreciate that I am full focused on fundraising the last $6.5 million for the main project,” she said. “This [new library] can’t wait for me to finish that [legacy building] job, so we need a source of funding immediately. I think one of the things that’s maybe not obvious is—we will move into the new building, that’s for sure, that’s all going to happen, the new building will open, we’ll move in, that’s not a problem—the challenge will be, if we’re not ready, if we don’t start this process right now, when we get to Feb. 1, if we don’t have all of the relevant approvals, permissions, et cetera, we will have two libraries sitting on that site.”

Unveiled in January 2020 with a formal application that followed in March 2021, the library’s rebuilding project received P&Z approval last July, following eight hearings. As part of that approval, P&Z set several conditions, including these two:

Within a hundred and twenty days (120) after the effective date of approval the New Canaan Library shall work with the Town Planner and if desired by the Commission or Town Planner, an external adviser, hired by the Town and paid for by the Library to present options to preserve appropriate portions of the existing library building older than 1937. Appropriate items recommended, by the Commission, for preservation could include, the façade, pillars and roof line of the pre-1937 buildings.

The final preservation option plan shall be reviewed by the Town Planner and shall be brought back to the Commission, for approval prior to the implementation of the plan.

Then, in December, P&Z by a 7-2 vote approved an option for preservation that includes moving the legacy building 80 feet away from the new one, with a grove of trees separating them, placing it on a new foundation so that the front stairs could be preserved and closing off its walls. (The other option was to preserve just the facade and portico from the legacy building.)

The issue of whether and how to preserve the 1913 building dominated much of P&Z’s deliberations. The New Canaan Preservation Alliance sued P&Z over its approval for the project last summer, then tried (and failed) to force a referendum vote on the town’s $10 million contribution, and sued again three months ago after the Commission approved the preservation plan.

Board of Finance member Victor Alvarez said P&Z’s conditioned approval should be a “cautionary tale” for the town.

“When the P&Z board decided to place a condition on the permission granting the new library project, they essentially were driving up the cost by $2.5 million by saying, ‘In order for us to approve this, you have to move the old building,’ ” he said. “And from my point of view, the people that were in support of preserving the old building were a special interest. They weren’t the majority of the town, and so going forward I think we need to be cognizant of the fact that very vocal, very well-organized people can come in and have strong opinions about projects that are going on in the town but they could ultimately lead to very significant cost overruns.”

Oldham showed the Board a present-day drone image of the project, which is already more than 30% complete and includes the installation of all steel.

“You can see how these two buildings fit on the site,” Oldham said.

“At the moment, what we have approval for does not contemplate how we will preserve the legacy building,” she added. “For that we will have to go back to P&Z and get the relevant approvals. If we don’t have that, once we’ve done the punch list—we’ve moved in, we’ve opened the doors to the public—we don’t have a way forward if we haven’t gone through this process.”

Lavieri noted that the Board of Finance itself cannot create an appropriation to vote on—such a funding request would have to originate with the Board of Selectmen.

“Or you can put that request in, but there’s got to be a vehicle for getting that ball rolling,” he said.

Lavieri continued: “And then, just to play it out a little bit, if the selectman’s office is going to recommend $1.5 million—and I don’t know how this is all going to work out, by the way, we have to figure out whether there’s going to be some private funding that makes up the other $1 million over time or whatever, that all needs to be worked out—but assuming that the ask may be $1 million or $1.5 million that the town funds, we need an appropriation request. We’ll need to process it. And then the taxpayers will have a bite at that. That may be something they want to have a point of view on, as to whether or not there are people that are very supportive of preserving the legacy building, and there are people that aren’t. We have to recognize that in this town. So we will have to sort out how all of that unfolds. We will absolutely need a request for that and it probably needs to happen by our May meeting.”

The discussion, which followed Oldham’s update on the project, raised several questions.

For example, it wasn’t clear whether P&Z or other town bodies view moving the legacy building as a separate project from construction of the new library, whether the library itself is allowed to spend some of the money it already has fundraised on the $1.5 million preservation piece (or whether it’s committed specifically to construction of the new building), whether those who advocated for preservation (such as the NCPA) will pay to move the the 1913 building, whether the library could draw on a line of credit from the town for the preservation project and why, given that P&Z approved the preservation option in December, the need for $1.5 million only emerged in April (Oldham noted during the meeting that the overall $2.5 million cost of the preservation project hasn’t changed over time).

It also isn’t clear whether, in the future, the library would be able to demolish the legacy building (along with the rest of the existing library) if it can’t secure funding for the preservation piece, or what the consequence would be for such demolition.

Lavieri noted that a taxpayer appropriation to preserve the legacy building would itself be subject to the will of New Canaan voters.

“We could move it and 800 people could sign a petition saying ‘We don’t want to spend that money’ and then there could be a referendum and it might not happen,” Lavieri said. “And then if it doesn’t happen and the taxpayers don’t want it, then there won’t be a legacy building. Right? So to your point, this will be how it will unfold, whether we like it or not. We have to get an appropriation and people can referendum an appropriation that we make.”

It also isn’t clear whether the Board of Selectmen will take the matter up at its meeting next Tuesday. The agenda for the April 19 meeting had not been published at the time of this article’s publication. First Selectman Kevin Moynihan sets the Board’s agenda, though because it’s a regular meeting, the elected body also may amend the agenda to add a voting item during the meeting itself. (There’s another selectmen meeting scheduled for May 3, which also is prior to the Board of Finance’s next meeting.) It’s unclear where the selectmen stand on the prospect of such an appropriation. Moynihan said nothing during the library discussion at the finance board meeting.

Asked by Board of Finance member Colm Dobbyn what the library would do with the legacy building after moving and restoring it, Oldham said, “The best answer I can give is, this wasn’t part of our original plan. It’s what we’ve got now. It’s a beautiful looking compromise and it will be, when it’s secured—that’s our main goal right now, secure it, preserve it, make it safe— move into the new building and then thoughtfully, carefully work out what the correct use of this space is. And I think it’s really important that we don’t just manufacture a use because we’ve suddenly got a building. But rather, we think very thoughtfully about what is the best use for this building. And I think there’s no particular reason to rush that.”