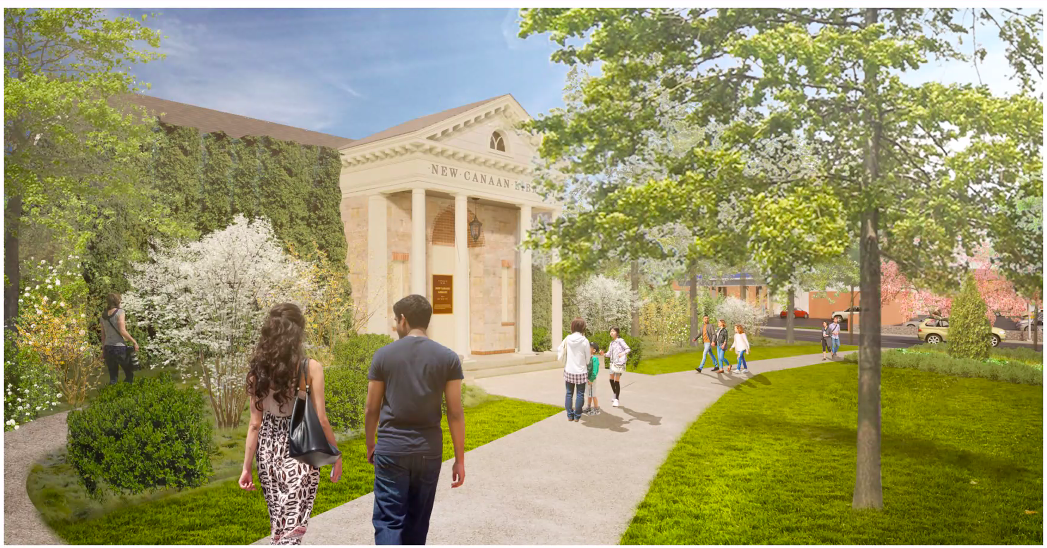 Rendering of the 1913 building's portico and wall moved to the property line shared by the Gulf Station.

Library officials last week unveiled renderings of what they’re calling an offer of compromise to preservationists who are opposed to the demolition of a century-old structure as part of a plan to rebuild the downtown facility. 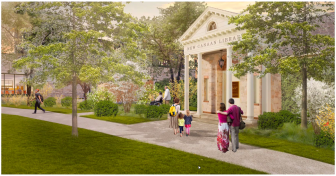 Rendering of the 1913 building’s portico and wall moved to the property line shared by the Gulf Station.

Moving the 1913 building’s portico and the Main Street-facing wall to the western border of the library’s campus could cost about $600,000 to $700,000, Executive Director Lisa Oldham told members of the Board of Finance during their regular meeting, held June 8 both in person and via videoconference.

The library is “trying to get to a compromise solution that would respectfully honor the past, memorialize meaningfully the original library and not sacrifice the green, given the importance of the green to the overall campus,” Oldham told the finance board.

At past public meetings, the library has said it would memorialize the 1913 building and its 1930s addition with professional photos, a limited edition commemorative book and works of art featuring the original structure that would become part of a permanent collection on display in the new facility. Library officials also have said in the past that granite from the 1913 facade would be used in a retaining wall for the green overlooking Cherry and Main Streets. 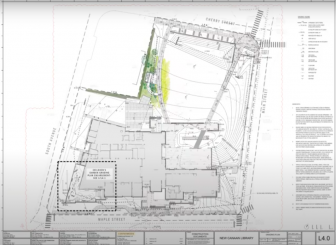 The renderings above correspond to the shaded area of the site plan shown here, where South Avenue runs up-and-down on the left side of the schematic, and Cherry Street runs left-to-right across the top.

The new proposal would see the portico and wall, at a depth of about eight feet, moved to the property line that the library shares with the gas station, New Canaan Library Board of Trustees President Bob Butman said.

“It is essentially the facade with the stone wall behind it and a plaque,” he said. “So it would be appropriate for reading a book or sitting there observing a concert on the library green, but it’s not a functional piece.”

Asked whether the new proposal regarding the portico and wall has been submitted to the Planning & Zoning Commission, Oldham said, “No, because when we heard that only the original building in situ was what was voiced to be acceptable to the other side of the mediation, we didn’t submit it. But what we heard from the P&Z was they had been looking for this.”

The comments came during an update from Oldham and Butman on the library project.

The most updated project cost estimate is $39.2 million, a figure that includes $1.7 million in contingencies, Butman said. The library already has raised $16.9 million toward the project from more than 220 individual donors, is seeking a $10 million contribution from the town and has a four-year plan to fundraise the balance, he said. The library is “comfortable” with the draft Memorandum of Understanding that the Town Council approved in April, Butman said. The document spells out the terms of the town’s contribution.

With approvals from P&Z, construction would start this summer and last nearly two years, so that the new library would open in the summer of 2023, he said. Plans filed Feb. 26 call for a 42,641-square-foot facility oriented toward South Avenue and Maple Street—with a Children’s Room twice the size of the current one, a Business Center, flex spaces such as a teaching kitchen and large meeting room, 355-seat auditorium, outdoor terrace, small ‘café,’ ’living room’ on the mezzanine level promoting social interaction and ‘library green’ that includes the parcel where the library’s original 1913 building now stands.

Board of Finance Chair Todd Lavieri said that “this Board continues to be very excited” about the project.

“We want to build a library, we want to have an icon in the town,” he said.

Regarding the library’s new offer, he said, “I think from my point of view, at least, thanks for trying something that at least could work. I don’t know enough about the details of everyone’s arguments. I think that was a really thoughtful thing to try to do.”

P&Z could to make a decision at its June 29 meeting on the library’s applications for Special Permit and site plan approval, and attendant applications for a new overlay zone and boundary change. The Commission technically has 65 days from the close of the public hearing on the library’s application, which was May 25 (it’s unclear whether a pandemic-related executive order from Gov. Ned Lamont that would allow for a further 90-day extension could apply).

Though commissioners are no longer taking public input on the applications, parties such as the applicant and members of the Friends of Our 1913 Library group may communicate directly with the town planner, Lynn Brooks Avni, as she pulls together all the feedback from the Commission and drafts conditions for approval, or denial, or both, for P&Z’s eventual review. If Brooks Avni drafts conditions for a decision and forwards the document to members of P&Z, that draft becomes a public record (as the town attorney’s firm recently was told).

At P&Z’s sixth hearing on the library project, held June 3 via videoconference, Commission Chair John Goodwin called the application “one of the most difficult ones I’ve faced in terms of thinking about decisions, considerations.”

Some members of P&Z signaled a preference for preservation at the meeting, while others said they were leaning toward approving the library’s application as-is.

Commissioner Dan Radman said that while he thinks the new library is a “handsome” building, that the 1913 building is “worth saving.”

“I do not think this is the right solution for the town,” Radman said of the library’s plan, saying it represents a “missed opportunity.”

“I think in this case, the current proposed solution—from everything I’ve seen and everything I’ve heard, everything we’ve seen, with the deletion of the parking structure, the escalating budget—I think it’s a solution of convenience and of cost,” he said.

“It is the simplest programmatically and sequence-wise in terms of construction. It is the least expensive because you can keep the existing structure operational, while the new structure is being built and then abandon and demo the old. I get it. I completely understand. But I think it does a disservice to the town to abandon the old library and not incorporate it into the new design. I think that’s where Centerbrook, specifically Centerbrook, as the architects who have done that type of solution—incorporating a historic structure on a number of their projects, which are for all to see on their website—had a great opportunity. Obviously they were given different direction on how to proceed, and I get that, too. Again, I think it’s a missed opportunity. I think it could’ve worked. I don’t subscribe nor agree to the response that ‘We looked at it and we couldn’t make it work.’ As an architect, you make it work. That is your job. When you are given direction by your client, you find a solution. Obviously the direction was different.”

By contrast, Commissioner John Kriz said he was “leaning strongly toward approving the various applications that the library has made,” calling the 1913 library “a very nice old building” that’s in good physical condition but whose preservation “becomes problematic” when the library itself says it has no use for it and when it gets in the way of a green space that is a “significant civic asset.”

“I think the town needs a better library and that a good library is a keystone of any town, particularly one as active as the town of New Canaan, and speaks very directly to property values, health, welfare and safety, given the various programs that the library has and would be able to have in more abundance with a different physical plant,” Kriz said. “Vital community resource, particularly for the elderly, who are looking for ways to continue to engage in the community, ongoing education and socialization, as well as people of more modest means, who relay on more public facilities for entertainment and education.”

The library had mentioned the idea of removing the portico and facade of the 1913 building at past P&Z hearings—a fact that Goodwin noted during the Commission’s June 3 meeting. (There, two P&Z Commissioners, Arthur Casavant and Kent Turner, said that the proposal would not satisfy preservationists.)

At the June 8 finance board meeting, Butman said that the past year has seen the library’s concept drawings evolve “through schematic and detailed design development plans, into construction documents and finally culminating the past week in the receipt of a draft of a draft ‘GMP,’ or guaranteed maximum price contract from our construction manager, Turner Construction.”

“So we’re very excited about that,” he said. “And I am happy to report that so far, despite many bumps in the road, everything related to the project has been on schedule and, most importantly, on budget.”

Once the library receives P&Z approval, “the next step would be sign the contracts with the subcontractors and obtain the building permits,” he said. “That’s the next step we would move onto after P&Z approval. Now, it was anticipated that we would be breaking ground in June of this year, but it looks like now mid-August to late-August would be the most likely scenario to put a shovel in the ground, assuming that on June 29th, which is the next time that P&Z meets, they give approval, or shortly thereafter.”

Though he said there’s no reason why P&Z would not approve the library’s project as submitted, still “we have to be realistic and assume also the worst-case scenario,” Butman said.

“I will be careful with my words here, but I wanted to be crystal-clear to everyone that if for any reason the application is denied or conditioned upon a redesign, then the project is effectively dead. And this is not a threat, but it’s just the reality of the situation. The redesign, the additional costs, the substantial delays that would occur and the various fundraising issues will prohibitively stop the project in its tracks, and require a complete reboot. And that is something that our current Board [of Trustees] and governors will not accept. So we don’t expect this to happen, but it’s clearly a risk in the project and something we have to openly disclose to all town officials and particularly the Board of Finance.”