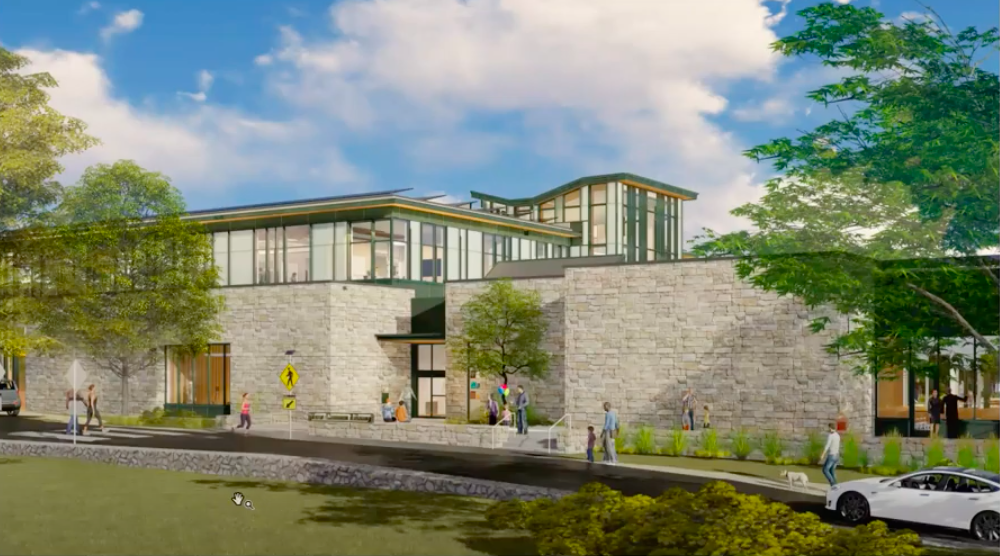 Members of the Police Commission said at their most recent meeting that they need more time to decide whether a proposed new crosswalk connecting Center School Lot with the main entrance of a rebuilt New Canaan Library should be raised or level with the roadway.

Library officials have proposed that the crosswalk spanning Maple Street should be raised not only to accommodate those using six disabled spaces in the parking lot but also as a traffic calming and safety measure for the 400 mothers and children who use the facility each day.

In addition, four disabled spaces that the library now plans to install on-site are around the back of the planned new building and further away from the entrance than the disabled spaces in the Center School Lot, officials told the Commission at its April 21 meeting, held via videoconference.

“Where we would have to put the spaces on the library side [of Maple Street] is sort of around the back of the building a little bit, and it’s more for accessibility to the library green and if there are employees at some point in time who would have access to it, because that’s where you would typically go in as an employee,” attorney Brian Smith of Robinson + Cole, representing the library, told the Commission. “It also obviously serves the purpose of providing the four spaces needed, but by changing and adding and rearranging the six spaces in Center School Lot, we would be providing more accessibility altogether, which we think is the proper thing to do.”

New signage, and a pedestrian-activated “rapid rectangular flashing beacon” that alerts motorists to those using the crosswalk—similar to those located at Weed and Elm Streets—also are planned for area.

Yet there could better ways to ensure that motorists are driving slowly on Maple Street, and given that the library’s applications for its new building are still before the Planning & Zoning Commission, meaning it’s not certain just how on-site disabled parking will be handled, Police Commission Chair Paul Foley suggested the appointed body wait at least one month before signing off on the new raised crosswalk.

Maple Street itself is largely used as a cut-through for motorists avoiding traffic signals on Cherry Street, Foley said.

“There might be another solution here on how to calm the traffic,” he said. “It really wasn’t raised to me, or I didn’t focus on it, that all of the library pedestrian traffic was now crossing Maple Street all day long. That’s just a new nuance that I hadn’t focused on.”

Foley added, “I think what we would like to see is what the final plans are, or near final plans, and then come to some kind of conclusion. We are going to have a crosswalk there, it’s just a question of whether it’s going to be raised or not.”

The discussion came one month after P&Z opened hearings on the library’s  applications to build a new, glass-and-stone-exterior facility that makes dramatically difference use of the organization’s gateway block to the downtown. Plans filed Feb. 26 call for a 42,641-square-foot facility oriented toward South Avenue and Maple Street—with a Children’s Room twice the size of the current one, a Business Center, flex spaces such as a teaching kitchen and large meeting room, 355-seat auditorium, outdoor terrace, small ‘café,’ ’living room’ on the mezzanine level promoting social interaction and ‘library green’ that includes the parcel where the library’s original 1913 building now stands.

The library is seeking approval from P&Z for its site plan and Special Permit, as well as the introduction of a new zone in the New Canaan Zoning Regulations and attendant zoning boundary change.

Members of a nonprofit group and their supporters are seeking to ensure that the original library building (and 1930s addition) are preserved. They addressed P&Z at the appointed body’s second hearing. The Commission since then conducted a site visit to the library.

During a fourth P&Z hearing on April 27, library officials and representatives responded to questions raised by the Commission, and others, and went into more detail about the planned green’s design and use. They also described ways they plan to honor the 1913 building in the new one, including through professional photos, a limited edition commemorative book and works of art featuring the original structure that would become part of a permanent collection on display in the new facility. Library officials also said that granite from the 1913 facade will be used in a retaining wall for the green that fronts Cherry and Main Streets, and two paintings featured in a media room at the library are to be returned to the New Canaan Museum & Historical Society.

Those opposed to the demolition of the 1913 building said urged P&Z to enforce New Canaan’s Village District Design Guidelines, highlighting that the guiding document says, in part, “Whenever possible, historically and/or architecturally significant structure or features should be reused and incorporated into any development or redevelopment proposal.”

P&Z Chair John Goodwin asked the preservation group’s land use attorney, Pat Sullivan of Cohen and Wolf, to draft a condition that the preservationists would like to see included in a project approval. (The Commission often weighs such proposed conditions on major projects, and even drafts full approvals as well as denials before making a decision on one or the other—as it had been planning to do last year with a proposed senior living facility on Oenoke Ridge.)

Goodwin also said that the Commission needs more information regarding projected traffic prior to closing the hearing for its own deliberations. As it often does with major applications, P&Z instructed the applicant—in this case, the library—to pay for a new study from an independent consultant whose duties would include assessing what would it cost to retain the building, as well as what are the incremental demolition costs, what are the retrofit costs, how does such a building fit vis-a-vis a modern library.

During the Police Commission meeting, officials from Langan engineering firm reviewed their traffic analysis of the area, described the proposed new crosswalk and said they’re planning to install a drop-off and pickup area out front of the new library on Maple Street. In consultation with the town, the applicant also has suggested making the South Avenue entrance-only into the Center School Lot two-way, in order to alleviate traffic on Maple.

Discussions of whether the crosswalk should be raised dominated much of the meeting.

Commissioners asked about a lack of planned parking spaces for the disabled on the library block (there’s a proposal for four ADA-complaint spaces in the service area of the site), what is the height of the proposed crosswalk (about six inches), why not ramp down at either end of the crosswalk and have it on-grade with Maple Street instead of raised (safety considerations from the town’s side), whether the incline of the crosswalk will be gentle for cars low to the ground (yes), what are the required number of disabled spaces for the library (four, based on a 76-space lot), how many disabled space are there now at Center School Lot (six, including four that are striped) whether the raised crosswalk would be the only one in New Canaan (yes) and whether that would create challenges for the Department of Public Works (yes).

Tiger Mann said, “It would pose a problem for emergency vehicles, as well.”

“Our thought for the library was if you could find room for the accessible spaces on the library side then it would negate the need for the raised crosswalk and we would just need a crosswalk at that point in time. We already have one. It would just be a relocated one and possible additional amenities with a [rapid rectangular flashing beacon] and things of that nature. But you could have a it be a conventional crosswalk, being flush with the pavement whereby the curb ramps would ramp down the pavement and then you could walk across at grade and come back up onto the sidewalk.”

A consultant hired to review parking and traffic—Michael Galante, director of traffic at Norwalk-based Hardesty & Hanover LLC—said the main driver for raising the crosswalk “was to accommodate the person in the wheelchair or some type of handicapped, approaching Maple Street in a safe manner.”

The crosswalk itself would be gradual raise, not a speed bump, that’ at least forfeit wide, according to Gallante. It slows drivers down as a visual feature, he said.