New Canaan’s Kelly Daniel was living in London in September 2001, and on the 11th of that month she sat down to watch TV with her visiting parents after a day of sightseeing in the English capital. 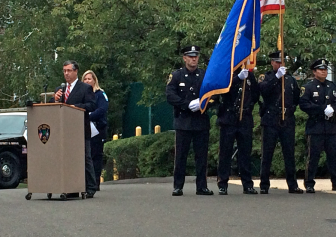 For Daniel, now an EMT and president of the New Canaan Volunteer Ambulance Corps, what appeared on the news changed her life. 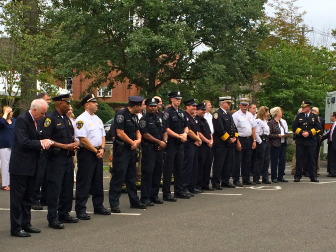 “We became vigilant in train stations and avoided large crowds and gatherings. Within our family, we created a code word and a plan of where to meet if a terrorist attack occurred where we were living. Our children don’t remember and know how life was before September 11th. It shaped their childhood, their daily activities and their future. The horrific events on 9/11 changed our culture, especially as it relates to emergency preparedness.”

Daniel joined Fire Chief Jack Hennessey, First Selectman Rob Mallozzi and Diane Wells of New Canaan’s Hannah Benedict Carter Chapter of the Daughters of American Revolution in addressing the crowd that gathered in front of police headquarters for an annual memorial ceremony honoring those lost during the Sept. 11, 2001 terrorist attacks. 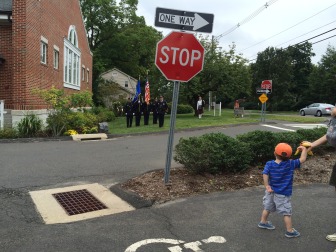 Calling that a day “when our innocence was lost” for an entire generation of Americans, and saying that she is reminded of it on similar mornings—”On that crisp, sunny September morning 13 years ago, a new reality was born to every American”—Daniel said “it is fitting that every year on September 11th, Americans join together to honor the memory of more than 3,000 people who died that day.

“Also, it is fitting that we observe a moment of silence as a tribute to the bankers and brokers, analysts and administrative assistants, technicians and engineers, pilots and flight attendants, vacationers and business travelers, soldiers and sailors, firefighters and police officers and medics,” she said. “Let’s take a moment of silence for all that were lost that day in New York City, Arlington, Virginia and Shanksville, Pennsylvania. We also with deep respect remember the three members of our immediate New Canaan community who were lost that day in New York: Joseph Coppo, Brad Fetchet and Eamon McEneaney.” 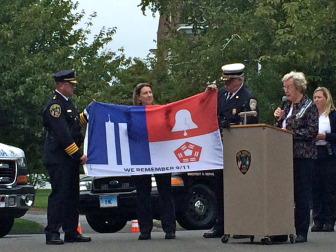 L-R: Police Chief Leon Krolikowski, EMT Wendy Hilboldt and Fire Chief Jack Hennessey receive a “flag of remembrance” from Diane Wells of New Canaan’s Hannah Benedict Carter Chapter of the Daughters of American Revolution on Sept. 11, 2014 in front of NCPD. The flag will hang beside the 9/11 memorial at the fire house. Credit: Michael Dinan

During the solemn, dignified ceremony, presided over by the New Canaan Police Department Honor Guard—composed of Officers Jeff Deak, Chris Dewey, Aaron LaTourette and Jason Kim and led by Police Capt. Vincent DeMaio—a “flag of remembrance” was presented by Wells on behalf of the DAR to Hennessey, Police Chief Leon Krolikowski and longtime NCVAC EMT Wendy Hilboldt. Containing images of New York City, a Liberty Bell representing Shanksville and the Pentagon—final resting places of so many—the flag will hang near the 9/11 memorial outside the Fire Department up on Main Street. 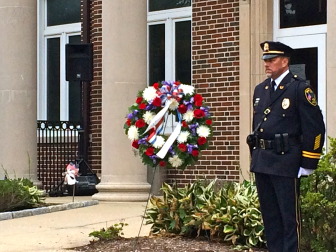 For Daniel, the occasion of a 9/11 anniversary is a reminder not only of the civilians lost to the terrorist attacks but also the emergency responders who did what each of them has in common, “and that is the drive to help people without hesitation.”

“Helping people sometimes puts one at risk of their own safety, but emergency workers don’t think of it that way, and neither did the responders on 9/11—those who were injured, those who acquired long-term health issues and those who lost their lives,” Daniel said. “We honor those heroes and thank them today for their service so that we may continue to serve their communities in their honor.” 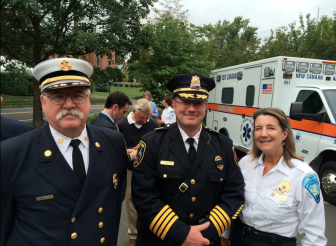 The Rev. Ralph Segura of St. Aloysius Roman Catholic Church presided over the ceremony, offering an invocation and moment of silence, as well as a benediction.

In that, Segura called for God to bless and console those who mourn for loved ones lost on 9/11, and to continue to “bless those who serve out of the goodness of their hearts” to provide the res of us with prosperity, security and safety.