For a sweeping view of domestic violence’s prevalence here, our town may not need the 1,000 purple pinwheels now stuck into the knoll outside Vine Cottage, each representing a resident who called New Canaan Police in the past decade because of violence in their homes, according to one local expert. 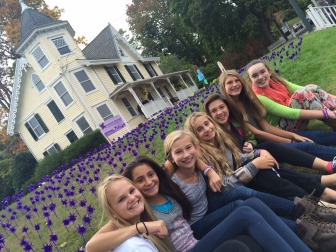 Members of the Canaan Parish Chapter of the National Charity League for their seventh grade project (they’re all Saxe Middle School seventh-graders) inserted 1,000 pinwheels into the grass outside of Vine Cottage to mark October as Domestic Violence Awareness Month. Each pinwheel represents one resident who called New Canaan Police in the past 10 years because of violence in their homes. L-R: Fallon Arnone, Caroline Tuffy, Alex Carlson, Sadie Slattery, Emma Schullman, Ally Leopold and Paula Graham. Credit: Michael Dinan

“I think Ray Rice has done that for us,” Bartlett told dozens of New Canaan High School students who gathered in the main lobby with teachers, faculty, administrators, SROs and town officials for a proclamation reading.

“How many of you saw the video clip of the Baltimore Ravens football player punch his girlfriend, knock her out and drag her by the hair out of the elevator?” Bartlett said, prompting everyone to raise a hand. “Yes, you, me and about 50 million other Americans saw that tape, and maybe for a whole lot of folks, it was the first time that they saw what domestic violence looked like. And it was pretty awful, and it was pretty grim.”

During a 20-minute event that New Canaan High School Assistant Principal Ari Rothman described as one way that the school community shows “we care a great deal about how people treat each other,” Bartlett addressed the teens and joined First Selectman Rob Mallozzi for a proclamation reading that marked October as Domestic Violence Awareness Month (article continues below):

For Bartlett, whom Mallozzi called “absolutely amazing,” domestic violence is about a wider culture of violence “that permeates our society.”

“And it’s not just in some of our sports,” she said. “It’s on college campuses that some of you will be going to in a few years. Sometimes it’s in schools and yes, sometimes it’s in our homes. It’s about bullying, it’s about date rape, it’s about domestic violence and you don’t have to look very far to find it. It’s here in town.”

Calling domestic violence “an equal opportunity crime,” Bartlett told the teens gathered in the lobby—most of them female—that one in three women in the United States will be abused in their lifetimes.

Bartlett encouraged the teens to speak to a trusted adult—teacher, guidance counselor, police officer or administrator, for example—if they’re in a violent relationship or suspect that one of their friends are in one..

“Look out for one another,” she said, look for lonely kids, reach out and “be a caring person.”

“Domestic violence and bullying are not just about some crazy football players who got nuts,” she said. “It is everyone, it is all of us. New Canaan is a zero-tolerance town and that means no more violence, no more bullying, no more abuse.”