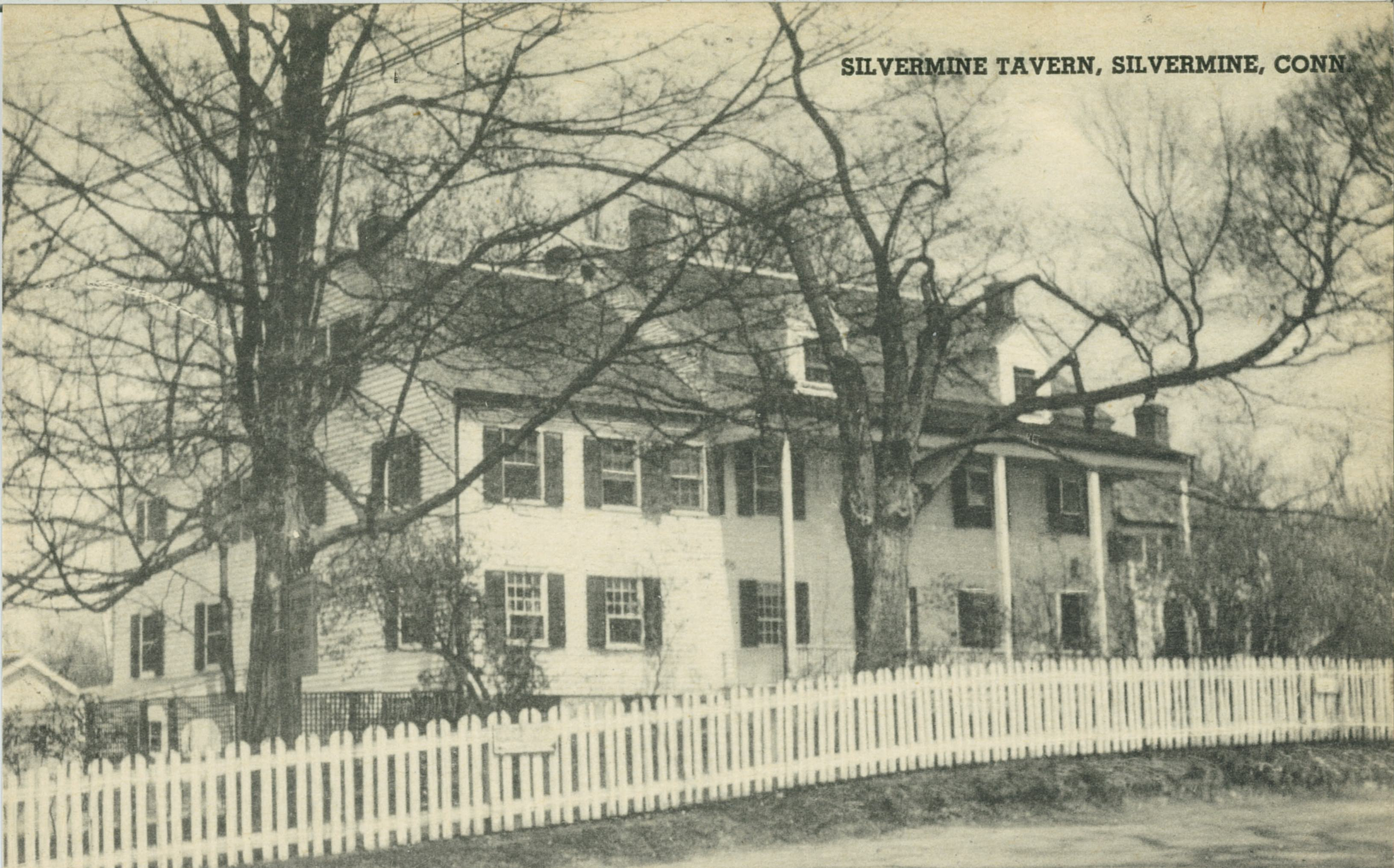 Located three miles away from the town center and just outside of New Canaan’s borders, the Silvermine Tavern has been an institution for most New Canaanites.

The tavern, pictured above, was built by Joseph Cocker c. 1810 as a cotton factory.  The business could not have been too successful because, when Cocker died in 1812, he had massive debts.  The factory changed hands many times over the next few decades seemingly with each new owner adding to the building.  These expansions included a weaving room,  living quarters for employees, and eventually the incorporation of the gatehouse, which became the entrance to the Tavern.  In the 1850s, the property was bought by Henry Guthrie, an English immigrant, who despite only being 22 at the time, owned three mills and a shipyard.  He used the building to produce door knobs and handles for furniture.  The finishing work was done by local girls in what became the main dining room of the tavern.

1909 saw the beginnings of what would become the Silvermine Tavern.  It was in this year that the building was purchased by Otto Goldstein, a German immigrant.  He converted the factory into his home and a bar for the local area, pulling on his past experience as the owner of a beer garden in New York City.  That business apparently met its end when a vat of fermenting mustard exploded in the basement.  Goldstein also owned the Goldstein Fur Dying business, which was run from the mill that was located directly next to the tavern.  According to local residents, the coach house, which stood close to the old mill, served as a speakeasy during  Prohibition. In 1929, the business was sold to J. Kenneth Byard and renamed  the Silvermine Tavern.  Byard had the idea to begin a restaurant as well as add accommodations for overnight guests.  He purchased the old mill to add to the business. For some reason, Bryard  first converted the mill into a waffle restaurant, but later, along with the coach house, it was remodeled to have overnight rooms. Byard was an antiques collector and quickly filled the restaurant with his collection.  Many of the antiques used to decorate the rooms came from  an antiques store across the street and were often hung on the walls  with the price tags still attached.  Eventually the antiques store was purchased by one of the owners of the Silvermine Tavern and became known as the Country Store.  This building was originally a country store with space for the owner and his family to live upstairs.  When run by the Silvermine Tavern, it served as guest accommodations, gift shop, museum, and at one point gallery space for local Silvermine artists. The large deck which overlooked the Silvermine River was first added in 1937.   By the time Byard was finished, the Tavern had space for 200 customers.

One of the earliest objects the New Canaan Museum & Historical Society has of the Silvermine Tavern is a drinks menu dating sometime from when Byard owned the tavern.  The menu lists a little over eighty choices, including a martini (.35¢), side car (.45¢), Johnnie Walker Black (.50¢), and Old Log Cabin (.40¢).  The eight choices of imported wine could cost somewhere between $1 or all the way up to $1.40 for a split; a a full bottle of domestic wine cost between .85¢ and $1  The most expensive item on the menu at $6 was either a quart of Canard Duchene champagne or a quart of Pomery & Grene champagne; the cheapest were  beers and ales, which included both Pabst Blue Ribbon beer and ale, for .25¢.

In 1955, the tavern was sold to the Whitman family who ran the business until it closed in 2009.  The Glazer Group reopened it in 2017 as The Inn At GrayBarns. The tavern now holds closer to 100 people as a few of the additions to the building were removed.  The old mill is now a private residence.  The Country Store now known as the Mercantile at GrayBarns still serves the community as a small cafe and catering service.