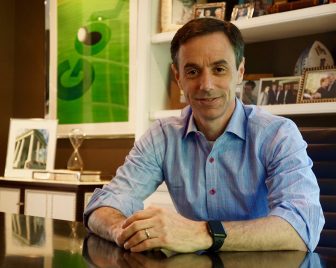 Michael Handler of New Canaan, a Republican, is putting in a bid for Connecticut governor. Contributed

Employed as director of administration for Stamford and serving as director of Emergency Management in New Canaan, Handler is known to thousands of local households as the recorded voice that advises residents about rescue efforts, shelter options, safety precautions and road closures during and after major storms.

Handler, 47, filed for a candidate committee for the office of governor July 14 and the state on Tuesday approved his filing, he said.

Describing himself as “hands on” and with background in investments and finance in the private sector who also has “a very strong background in public safety” and the public sector, “having dedicated myself to public office in Stamford for the last five years,” Handler said he’s already achieved success in areas that now are of pressing concern for the state, such as negotiating multiple contracts with unions.

“I have, more than anybody else out there, the experience of understanding what the prior administrations have done to Stamford financially and how to clean it up,” Handler told NewCanaanite.com.

“The most critical issues facing Connecticut are primarily fiscal, and there is no question that governors for many years have failed to address the State’s structural costs and instead opted to kick the can down the road,” Handler said. “I’ve cleaned up these very issues in Stamford and I’m ready to do the same for our state.”

Gov. Dannel Malloy has said he’s not running for re-election. His term expires next year.

A father of four girls who is married to his wife Sarah, Handler earned a bachelor’s degree in political science from Emory University and a MBA from Columbia University. In 2007, he retired from a 15-year career on Wall Street to enter public service.

He had been appointed to his current role in Stamford by former Mayor Michael Pavia, a Republican, and was retained by current Mayor David Martin, a Democrat.

Handler also has served as chairman of the city’s Water Pollution Control Authority and Tax Abatement Committee, and as vice chairman of the OPEB Board of Trustees, the summary said. He has been a member of New Canaan’s emergency medical services organization since 2000, it said.

Handler said that Connecticut voters are ready to “recognize that they need someone who can successfully address the State’s fiscal crisis, for the first time in decades.”

“If anything, I have proven that I can generate bipartisan support in solving serious problems,” he said. “While I have not run for public office in the past, I have experience in creating an agenda, targeting change, building consensus, getting through legislative bodies and successfully achieving outcomes and then building on that success to take to other challenges.”

He added: “I have the experience and skills to address major issues in this state. I’m not one to complain—my nature is to solve problems.”