New Canaan Republicans by a 10-vote margin on Tuesday backed Kevin Moynihan for the town’s highest elected office, voting 612-602 in favor of the Town Council member with incumbent First Selectman Rob Mallozzi coming in second at the party’s caucus, while voting for a mix of established and new candidates in down-ballot races.

Here’s a table breaking down the results of the caucus, held at New Canaan High School (story continues below): 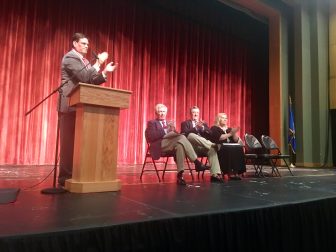 And among Republicans vying for seats on the Town Council, the top-four vote-getters were incumbents John Engel and Penny Young, as well as two newcomers to elected office, Tom Butterworth and Rich Townsend, who garnered more votes than anyone.

Asked about the prospect of a primary in September, given the close margin, Mallozzi said: “I am going to sit back and think about things. The 10-vote swing is not a big swing, so clearly there is a lot of support for both candidates in town. I will take the next couple of days and think about what I want to do and also think about the impact on the community and come up with a plan.”

He added: “Was I surprised? Absolutely. I really was. I saw a lot of ‘friendlies’ out there and thought I had a really positive message and so maybe positive messages are not as important as they used to be.” 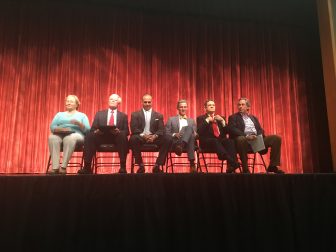 Regarding his longtime ally Williams, Mallozzi said: “I am so happy for Nick Williams and if I brought him down, I would be in tears right now.”

Asked how he felt about the outcome, Moynihan said, “Wow.”

“I felt good coming into tonight, but not this good. I thought I was going to be the underdog by a small margin, like 45-55.”

Asked what he thought the vote said, Moynihan answered: “I think it really says I  got my vote out and also he, after six years, there can be some disenchantment. I know a lot of folks that were on his team last time that weren’t with him this time. I think the incumbency has benefits, which he certainly used, and also the incumbency has negatives.”

Of the night’s results—Mallozzi lost with 47.3 percent of the vote versus Moynihan’s 48 percent—Williams said he had “mixed emotions.”

“I am delighted at my ability to beat my opponent, but honestly a little shocked at how the first selectman [race] went,” Williams said. “We knew it would be close. In the end, I think we thought Rob would prevail. Ten votes is not a lot of votes. That’s an incredibly small margin.”

Mallozzi said that as a matter of due diligence, he would look into whether a closer look physically at the ballots cast was warranted.

The more than 1,200 total ballots cast marks a dramatic uptick from the Republican caucus two years ago, when—despite contested races on the Town Council and Board of Education—just 285 people voted.

“This is to be expected for a contested race when you have such qualified candidates,” he said.

Townsend, who earned nearly 200 more votes than the next-highest Town Council candidate, said he felt “great” about the result.

“I am delighted,” he said. “My campaign folks just did a great job and we had a fun time doing it.”

Young said she was “pleased with the turnout” at the caucus.

“These people are engaged in the community,” she said. “They care about who their leaders are, and the public has spoken.”

Engel said the caucus saw “a great turnout of 1,250 on a hot July Tuesday.”

“I’m really glad that the town came out and supported the candidates,” he said.

Moderated and chaired by state Rep. Tom O’Dea (R-125th), the caucus in the NCHS auditorium by unanimous voice vote backed a slate of candidates for various offices in uncontested races, including:

Scott Gress, who spoke on behalf of Mallozzi by way of introducing him at the caucus, said the gathering was “extremely important.”

“Because let’s face it: We are choosing the next officers,” he said. “With all due respect to the Democrats, this is the election.”

Meanwhile, Democrats caucused at Town Hall and candidates who received party backing include:

In their speeches, candidates hit again many of the points they had made during two RTC-sponsored debates, held over the last few weeks at Town Hall.

Mallozzi said the election season so far has afforded him additional time with his friends and family and that “it’s wonderful to be part of a group of folks that do care about New Canaan.”

He reviewed several high points for New Canaan during his stewardship of the town, including creation of the new Post Office building , AAA credit rating for the municipality, strong pension fund, new roads, plans for athletic fields, natural gas and Solarize CT.

Ross touted her professional background in managing building projects, and underscored that she is most qualified to help New Canaan plan for the future.

“Without vision or direction or experience, we will not be able to achieve successful outcomes,” she said.

Moynihan, who was introduced by his wife Mim, said the first selectman’s job is a leadership position that needs someone to set New Canaan proactively on its best course. He said the current administration has failed to meet some of the town’s most pressing priorities.

Describing himself as a transparent and collaborative leader, he said: “I know we can do better.”

“I have the talent, knowledge and tenacity to solve tough problems,” he added.

Williams was introduced by Bill Walbert, chairman of the Town Council. Calling himself a “champion of excellence and transparency,” Williams said in his remarks as voting went on just outside the auditorium that it was an “honor and privilege” to seek the party’s nomination for the office of selectman.

“I want to continue in that job because it gives me the opportunity to help keep New Canaan what it is—one of the finest towns in the entire United States,” Williams said.

Kenin, introduced by Colleen Prostor, said that since her election to the Town Council she has been a “catalyst to energize” the Republican party in New Canaan. As an attorney and in advertising, Kenin said, she has gained experience managing people, budgets and expectations, as well as setting agendas and “delivering results.”

“So while some may suggest that only experience matters, I am here to tell you that results matter more,” she said.

She criticized the current administration as not doing enough to address issues facing New Canaanites, including with respect to real estate values and parking.

Town Council candidate Roy Abramowitz touted his background in finance and as a CPA, saying he assisted in founding the New Canaan Office of Emergency Management and spurred the town to create an Audit Committee. Abramowitz said New Canaan must find a balance whereby residential real estate values are stabilized through preserving New Canaan’s rural feel and at the same time addressing problems such as a shortage of commuter parking.

Townsend said protecting New Canaan property values would be a priority for him, through “strong schools, commuter convenience and fiscal discipline.” Vowing to listen to constituents if elected, Townsend said New Canaan offers a rare combination of living in a “small, picture-perfect village” while still having access to the “most energetic” city in the world.

Engel relayed an anecdote from his time serving in Operation Desert Storm during the Iraq War, describing how he led a platoon through the desert during a harrowing, deadly battle and took several prisoners. Hearing that those prisoners hadn’t had food, Engel said he saw to it that his platoon supplied them with their own—an unconventional interrogation tactic, he conceded. “The point: My high school wrestling coach had made me ‘tough enough,’ but what my country needed out there on the battlefield was compassion and confidence, right judgment and the long perspective.” Engel said he brings those qualities to his position on the Town Council.

Butterworth reviewed his extensive background in New Canaan—as both owner and, with his wife, Libby, restorer of New Canaan’s oldest home—as well as with the Town Players of New Canaan, Gridiron Club and other groups. Though New Canaan’s property values are “of paramount importance,” he said, “our home values are about more than tax rates.” He reviewed the ways that New Canaan offers a special charm to its residents while the town also must meet “the needs of modern society”—in much the same way that the Butterworths themselves have preserved their own homes’ charms (the couple has purchased an antique on Main Street) while updating them with modern conveniences (such as air conditioning). “New Canaan is not perfect but it works,” Butterworth said. “It’s not heaven but it is the next next stop to heaven. Let’s keep it that way.”

Melissa Mauro introduced her husband, Michael, reviewing the many reasons that the family decided to move here from Stamford some 18 months ago and why Michael decided to “jump headfirst into the political arena”—namely, because he has much to give. In his own remarks, Mauro said he would “fight for this town,” offering a fresh perspective as well as his own considerable skills “as an attorney dealing with very smart and opinionated people” while negotiating with unions.

Young in her remarks said that while much of the hubbub surrounding the caucus vote seemed to paint the town government as failing its constituents, New Canaan is faring rather well.

[Note: This article has been updated with additional quotes from candidates for elected office on the night of the caucus.]