Town resident Chris Schipper refers to trees here in New Canaan as “magnificent plants” and “creatures that have stood the test of time.”

New Canaan’s appreciation of trees, particularly large ones, increased in the wake of Hurricane Sandy, which took down so many of them, Schipper said Wednesday at a meeting of the Public Tree Board, held in the computer room at Lapham Community Center. 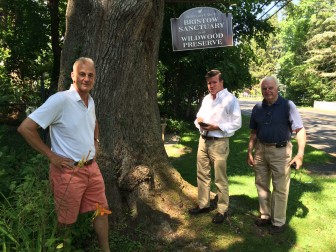 “It makes New Canaan bucolic, to have all of these trees around and these tree-lined streets,” said Schipper, a member of the volunteer board that assists the New Canaan tree warden in overseeing trees on public land in town. “We’re not going to end up like Rye or other places that are just built out in cleared lots.”

The board, which already is overseeing an effort to take an inventory of public trees in New Canaan, is inviting all residents to participate in a new “Notable Trees Project.”

The board’s goal is to develop and maintain a register tracking the largest tree of each species in town. All native and non-invasive naturalized tree species are eligible and a newly created “New Canaan Notable Tree Register” will be available on the board’s page on the town’s municipal website.

Connecticut through its statewide “Notable Trees Project” has been documenting big trees in the state for about 30 years. (A look through New Canaan’s contributions show several trees from what appears to be Lakeview Cemetery, including a Threadleaf Japanese Maple and American Holly.)

For New Canaan’s register, anyone can nominate a tree, whether it’s located on public or private land, the board said—though in the case of a tree on private property, written permission from the property owner is required.

The board is working on a nomination form that will include fields such as species, location and size, and functionality for photo uploads. In the meantime, nominations with digital photos can be sent to newcanaantreeboard@gmail.com.

The tree warden will verify measurements, the board said.

“People love large natural trees because it connects them to the history of this town in a way that few things can,” he said.

“The challenge is to find the biggest one,” he said.