None of the material weaknesses that auditors have identified in New Canaan’s finances in recent years have been the town treasurer’s responsibility, a candidate for the elected office said this week.

Nevertheless, the identification of those weaknesses became a focal point for many in New Canaan and what Democrat Rob Fryer said he would do if elected town treasurer is “see that this doesn’t happen again.”

“What CPAs do who work in auditing in large corporate environments—and probably municipal governments, as well—is work with clients to eliminate material weaknesses as and when they occur and as and when arise,” Fryer told more than 150 people gathered Monday night at Town Hall for a debate.

He added: “I have had the experience of years and years of eliminating material weaknesses, working with clients to do so and, if I am elected, the town will be my client and I will see that these things get addressed promptly.” 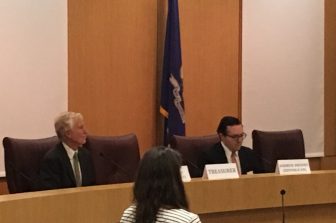 The incumbent town treasurer who is seeking re-election, Republican Andrew Brooks, said that it’s “important to know who has ultimate responsibility for remediating weaknesses” and noted that he was “one of the first people to support the creation of the town’s Audit Committee and commended members of the Town Council for their wisdom in creating that committee.”

“I am totally independent of the Finance Department for the purposes of checks and balances,” he said.

Brooks said further that the chairman of the Audit Committee recently made it clear “that there have never been any material weaknesses or deficiencies in my performance as treasurer, and that all the issues that were in the Finance Department, the material weaknesses have been remediated because of my recommendations and the Audit Committee’s recommendations finally being implemented.”

The pair debated during the League of Women Voters’ Candidates Forum. Candidates in all contested races for this year’s municipal election participated, including first selectman and Town Council. Brooks and Fryer debated for about 20 minutes of the 2.5-hour event.

They appeared to differ on just how closely the town treasurer should work with employees of the municipal Department of Finance.

Fryer said that in some Fairfield County who appoint their treasurer, the treasurer is the CFO.

“There is nothing in the statutes that says it has to be independent,” Fryer said. “You have to be objective, certainly, but what I would like to do if I get elected is work closely with our CFO and the Finance Department to raise their game. To use my experience to be a coach, to be a mentor to these people and just help them do their jobs better.”

Brooks countered that “it’s incredibly important that our treasurer be completely independent.”

“As an independently elected official,” the treasurer has specific “statutory obligations,” Brooks said, “and I think it’s important that I do not interfere with the accounting function and budgeting responsibilities of the Finance Department.”

“There are certainly opportunities for partnership and I have been that partner along the way,” Brooks continued.

Fryer noted that New Canaan has always earned interest on its investments and said that though Brooks has “taken steps this year to have a little more interest” on those accounts, it would be misleading to say the town has never earned interest.

Brooks gave a specific example of when he took action to earn interest for the town, meeting with the CFO of a local financial institution and negotiating a 44 percent interest rate increase in money market accounts where the town maintains balances of more than $10 million. As a result, he said, New Canaan earned far more money that it would have if left “on auto-pilot,” Brooks said.

“I believe that my specific recommendations, whether it’s with our investment funds or our balance accounts, have added hundreds of thousands of dollars to the bottom line, above and beyond what would have been there,” he said.

Moderator Marianne Pollak also asked the candidates what changes, if any, they’d recommended for the definition and scope of town treasurer.

Brooks noted that in these four years, he has “worked really hard to redefine the scope of the treasurer”—an assertion that Fryer also made.

Brooks—who succeeded 24-term incumbent Donald V. Hersam in the town treasurer role—said that following his election in 2013, he met with his counterparts in other municipalities to see what their day-to-day jobs were, as well as to review the state statutes that govern the position.

“In my time as treasurer I have taken it upon myself to operate in accordance with the statutes and in accordance with the best practices of other towns.,” he said. “That means being ultimately the town’s cash manager, and as the town’s cash manager I have looked for ways to earn additional revenue for the town. In my time as treasurer we have earned $1.6 million that has gone directly to reducing the property tax of town. I am looking to continue that progress in the next term.”

Fryer commended Brooks “for raising the bar in the treasurer role in the four years he has taken it on.”

“He has performed at a very high level, in my opinion,” Fryer said. “What I would like to do, if I am elected, is take it to another level and perform as diligently as Andrew has the statutory responsibilities which he has carried out diligently throughout the four years. I am in the fortunate position of being retired now. I had a long financial career. There is a lot that I can do, over and beyond, simply because I have the training, I have the education, I have the experience and now I have the time to add to the financial skills this town so desperately needs.”

Brooks rebutted that he is uniquely equipped to serve as town treasurer because his “industry and functional alignment is for the treasury function.”

Noting that he has worked with large accounting and consulting firms as well as with “the largest treasury departments and the biggest financial institutions in the world,” Brooks said it is “important that we have someone who is active and engaged in the financial services industry and in the treasury function specifically, rather than the mining industry as an accountant.”

Fryer said he understands that Brooks has experience working with asset managers and investment banks but that he is “struggling to find the relationship between that and a municipal treasurer function, which is a completely different environment and different financial risk.”

For example, he has worked in “improving cash management operations, improving transaction monitoring to avoid terrorist financing, which is a huge problem in today’s world.”

“I bring that same kind of mindset and due diligence to the work I do as the treasurer of the town,” he said. “I think it is absolutely applicable and has really helped me in blocking over $1 million of unauthorized payments from going out over the last four years.”