Town officials on Tuesday approved a contract with a New Canaan-based company to improve pedestrian access to Mead Park.

The Board of Selectmen vote 3-0 in favor of a $12,075 contract with Peter Lanni, Inc. to put in a new crosswalk on Park Street and make the sidewalks approaching the entrance to the park handicapped-accessible.

The new crosswalk will be located south of the entrance to Mead Park, near the access road for Lantern Way Condominiums. 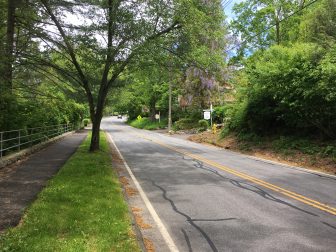 The crosswalk will be located in the foreground of the photo, near the entrance to Lantern Way. Credit: Sam Stoner

“We had several requests from the residents who live across the street in the condo complexes to try to get across Park Street safely and one of the thoughts was to put in a mid-block crosswalk from the Lantern Way Condominiums across the street to the sidewalk that’s on the western side of Park Street,” Director of Public Works Tiger Mann said during the meeting at Town Hall. 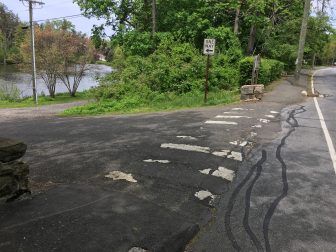 This pedestrian walkway across the motor vehicle entrance to Mead Park is to be improved. Credit: Sam Stoner

In addition to the new crosswalk, the project covers the creation of handicapped-accessible ramps that will run from the sidewalk on each end of the entrance to Mead Park. Also, a newly created pedestrian route with granite curbing will span that motor vehicle entrance.

According to Mann, “Those three are awaiting approval from Town Council [Wednesday] night as far as the bonding issuance. If they approve the bonding issuance, then we’ll discuss one last time with the residents exactly what’s happening in front of each resident… And then we will sit down specifically with each one and then go out to bid with the hope that we’ll be doing it in July and August of this year.”