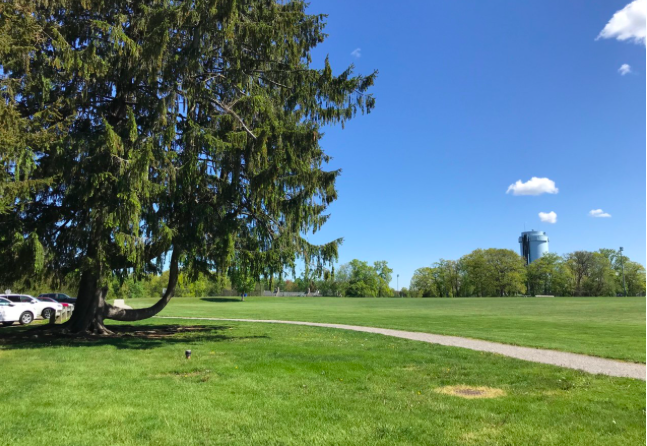 The Summer Theatre of New Canaan will run its 2021 season in the grassy field alongside the road in Waveny Park that runs up to Lapham Community Center. Credit: Michael Dinan

Parks officials on Wednesday approved a new location in Waveny for the Summer Theatre of New Canaan’s 2021 season.

The organization’s 18th outdoor season, featuring a production of “Honky Tonk Angels,” will run near the southwest corner of Waveny’s main athletic fields, north of the main road through the park, following a unanimous vote by the Parks & Recreation at its regular meeting.

Summer Theatre Executive Producer Ed Libonati said the area near a landmark pine tree opposite the parking lot for the paddle tennis courts and dog run turned out to be “an exceptionally great location for us.”

“We have an abridged season this year, a shorter one than normal,” Libonati told the Commission during its meeting, held via videoconference. “I was not sure how everything was going to turn out but it has turned out beautiful. We anticipate with the majority of the people being vaccinated that the protocol and the comfort level the health protocols and comfort level should go very well with the audiences. Obviously we have taken extreme care with protocols with our staff and everyone in our organization will be vaccinated who works with the Summer Theatre. And we are still working on final protocols, we’ll talk to [Recreation Director] Steve [Benko], the town, the state and other consultants we are working with in terms of masking or whatever for the audience. It will be conservative but it will also be in sync with what’s going on in the community.”

The grassy area planned for Summer Theatre, located along the road that runs up to Lapham Center, will not interfere with any softball games, Benko said.

“They would put their tent there,” he said. “The trailer would be behind the tent. They will put some screening to kind of block the tent area and their prep tent. And they will bring their own generator in for power. And the plan is to run their programs on Thursday, Friday and Saturday and its Sunday matinees.”

Libonati has said Summer Theatre this year is seeking to run four weeks of programming and to have about 250 people at its Saturday and Sunday shows. Set-up would happen in mid-June and shows should run through out of July—anchored by the all-women production of Dolly Parton’s “Honkey Tonk Angels”—and finish with breaking down the site in the first week of August, he has said.

The commissioners asked whether noise from athletic fields or the paddle tennis courts would cause a problem for Summer Theatre (no), whether there are events planned for Waveny House this summer (not until August) and where theatergoers will park (along the “pool road” and in the paddle lot).

Siegel asked Parks Superintendent John Howe whether there would be any problems with the tent damaging the grass of the soccer fields. He said no.

“The only issue we might have will be a little bit of wear and tear on the grass, but we can easily overseed it,” he said. “It’s a dry time of the year so it won’t be a problem. It will be a good location.”

Libonati had proposed other sites within Waveny before the approved location emerging as a contender at Parks & Rec’s April meeting.

“I appreciate the support that Summer Theatre gets from this Commission and from the town,” he said after the vote. “We look forward to a great season and continued partnership with you.”