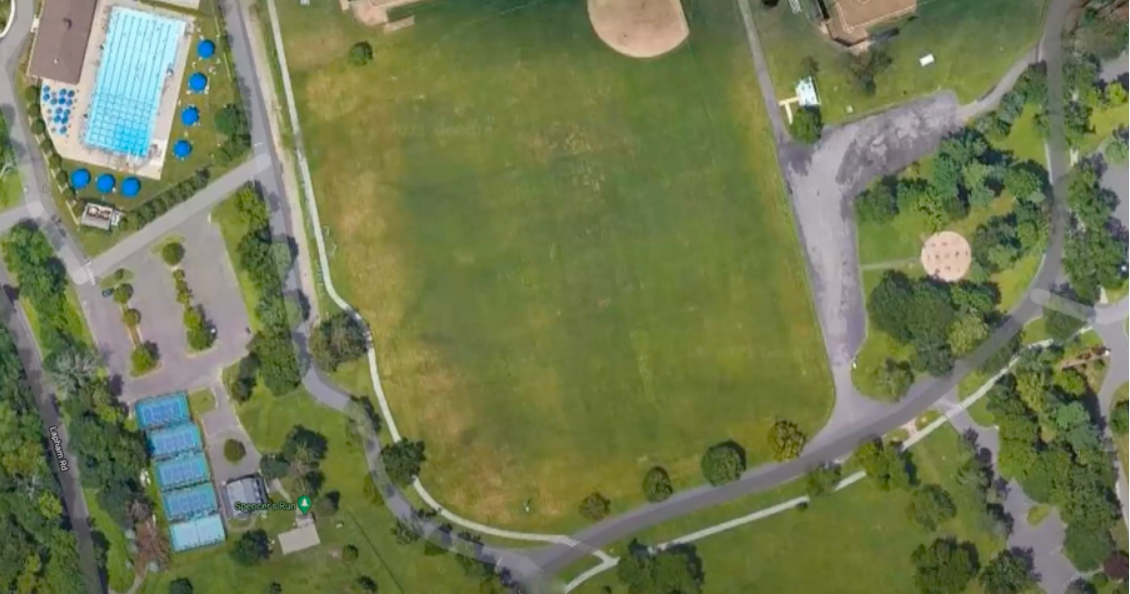 Officials are seeking to site the Summer Theatre of New Canaan's tent on the main athletic field at Waveny, near its southwestern corner—the tent would be located near the pine tree at the curve in the road running north-south as shown at left, roughly in line with the northernmost paddle tennis court. Google Maps image

Saying a proposed location near the walled garden won’t work, parks officials last week suggested Summer Theatre of New Canaan figure out a way to put on its 2021 performances on the main athletic fields.

Members of the Parks & Recreation Commission voted 10-1 at their April 14 meeting to have town officials and a designee from the appointed body work with the organization to arrange for a stage, tents and audience seats to be located near the southwest corner of Waveny’s main athletic fields, north of the main road through the park.

“I think that field is amazing,” Chair Rona Siegel said during the meeting, held via videoconference.

The area is flat, with good access to parking and restroom facilities, she said. It also will be visible to those using the park and especially motorists entering from Lapham Road, she said.

“It then makes people curious, it then gets a wider audience and an ability to sell more tickets,” Siegel said. “I love that it’s in Waveny Park. One more function in that beautiful park.”

As he’d proposed to the Commission in January, Summer Theatre Executive Producer Ed Libonati came to the meeting seeking permission to hold July performances along the north side of the sledding hill that runs from the fountain to the pond. The area has been cleared in recent years by the Waveny Park Conservancy.

Libonati explained how the production would be set up, powered and provide access to disabled people while trying to “not disturb the natural rhythm of what is going on in the park at that point,” but members of the Commission voiced concerns. They included wear-and-tear on newly created lawns on the hillside, access for people with poor balance and conflicts with the nearby Powerhouse Theater and Carriage Barn Arts Center, which also have summer events.

Siegel also noted that Parks & Rec earlier in the same meeting approved a comprehensive planting plan from the Conservancy near the pond itself.

“I certainly think the park is big enough for us to assist the Summer Theatre,” she said. “I think our hesitancy is, so much work has gone into the base of that Waveny Pond and I hate to see it in any way harmed or move us backwards. We are talking hundreds of thousands of dollars, not just a few thousand. And I think we are just so dedicated to it.”

Libonati said Summer Theatre this year was seeking to run four weeks of programming and to have about 250 people at its Saturday and Sunday shows. Set-up would happen in mid-June and shows should run through out of July—anchored by an all-women production of Dolly Parton’s “Honkey Tonk Angels”—and finished with breaking down the site in the first week of August, he said.

Regarding the proposed site on the Waveny athletic fields, Libonati said, “My only fear is that we are going to be competing with sports right there. We have done that in the past and it’s been challenging.”

He added, “I am just a little hesitant and giving tiniest bit of pushback” because setting up at a different site than had been planned would mean starting pre-production anew.

“So we will try to make this field work as much as we can, but revisit the other site if there is an issue,” he said.

Addressing Libonati’s concern about sports, Recreation Director Steve Benko said there’s no men’s softball leagues that play on weekends and most are done by 7:30 p.m. The proposed area is “out of the way,” Benko said.

Granito asked whether there would be an problem with parking for the Family Fourth at Waveny if the Summer Theatre tent were located on the athletic fields.

Libonati said the main tent is 60-by-100-feet and the two additional tents needed for the production are about 500 square feet. Members of the Commission said they would monitor state guidance for outdoor events to understand just how many people would be parking on the field come July 4.