New Canaan’s VFW Post 653 has organized its annual placement of U.S. flags at the gravestones of veterans buried in local cemeteries for 8 to 10 a.m. on Saturday, May 22. All are invited to help. Those interested are to meet at 8 a.m. in Lakeview Cemetery. The veterans area is located off the road through the cemetery from the entrance at Main Street and Millport Avenue, over the bridge and on the right. Anyone with questions about the flag placement can contact Frances Wilson at fcavalierewilson@gmail.com. The Memorial Day Parade will be held Monday, May 31, starting at 9:30 a.m. It will turn at Cherry Street and run down South Avenue and Harrison Avenue, due to construction on Main. “Due to the continuing COVID-19 pandemic, parade marchers and parade watchers should wear masks when social distancing cannot be maintained among marchers in the parade or among parade watchers along the parade route,” town officials said in a press release.

The New Canaan CARES Hybrid Home Tour is to be held 10 a.m. to 2 p.m. on Thursday, May 27. More information can be found here. 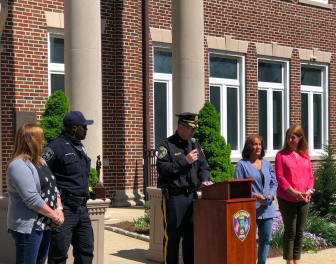 Pictured with New Canaan Police Officer Rex Sprosta (second from left) and Chief Leon Krolikowski (center) are Pat Wood (second from right), Lt. Stephen Wood’s widow, and their daughters Kim (L) and Kelly (R). During a presentation to Sprosta of the 2020 Lt. Stephen W. Wood Officer of the Year Award on May 13, 2021. Photo courtesy of NCPD

New Canaan Police during a ceremony Thursday presented the 2020 Lt. Stephen W. Wood Officer of the Year Award to Officer Rex Sprosta. Chief Leon Krolikowski in his remarks said that whether Sprosta is on or off duty, “he is always willing to assist his fellow officers through difficult situations.” The chief continued, “He has exceptional mentoring skills and is dedicated to helping and supporting his fellow officers.” More information about Sprosta can be found here. During a memorial ceremony that followed, Krolikowski said that in 2020, 264 officers “across our nation made the ultimate sacrifice.”

The department honored two New Canaan Police officers who died in the line of duty: Chief Constable Louis Drucker (Jan. 25, 1888) and Officer James Martin (July 24, 1991). “We honor their ultimate sacrifice and express our sincere condolences to their grieving families, friends, fellow officers and loved ones,” Krolikowski said. “Police officers are ordinary people who are at times required to exhibit extraordinary courage in the pursuit of their mission to safeguard the lives of the citizens they serve. The reason for our presence here today is to pay tribute to the bond of shared stress and sorrow, and to reaffirm, with the highest dignity, the nobility of our fallen officers. May we never forget.” A memorial wreath was placed at the base of the flagpole, which is flying at half-mast outside police headquarters on South Avenue.

The Town Clerk on May 5 received a Notice of Claim from Fairfield-based Laske Law Firm Inc. saying that a woman on Feb. 6 slipped and fell on ice at a town-owned property at 3 Farm Road, “causing her to sustain injuries to her left ankle for which she had a plate and 3 screws inserted, emotional and physical pain and suffering, as well as lost wages from her employment.”

The New Canaan Artisans Spring Boutique—featuring handcrafted gifts for spring celebrations—is to be held 1 to 6 p.m. on Monday, May 17, and 10 a.m. to 2 p.m. on Tuesday, May 18 at the Roger Sherman Inn on Oenoke Ridge. Admission and parking are free. All proceeds benefit local nonprofit organizations.

First Selectman Kevin Moynihan said during an interview this week that he’s “looking to bring two or three more” cell towers forward, in addition to one under construction on Soundview Lane and another one planned for upper Ponus Ridge.

More events worth putting in the calendar:

The Town Council has scheduled a special meeting for 7 p.m. Monday to set up a referendum vote regarding the Board of Education budget. The recommended date is 12 to 8 p.m. on Wednesday, June 2. 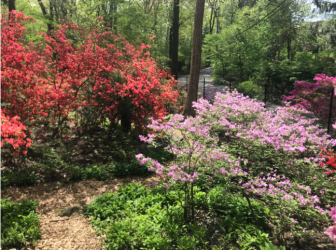 The azaleas at Lee Memorial Garden (89 Chichester Road) are currently in full bloom. Owned and maintained by New Canaan Beautification League, the garden is open to the public from dawn until dusk. Parking is available in the garden parking lot and overflow parking should park on side streets, not on Chichester. The gate doors to the garden are kept closed to keep out deer and visitors are free to open them to visit the garden. For more information about the garden, please visit new newcanaanbeautification.org.

Police at 7:40 a.m. on May 11 received a report of a Range Rover stolen from a Kimberly Place residence, unlocked with the keys left inside. It was recovered in Bridgeport.

Open Arts Alliance, partnering with Town Players of New Canaan, will hold virtual auditions for its live summer production of “Seussical KIDS.” Children aged 6 to 13 may audition at rehearsals July 6 to 15, with a performance date of July 16 at the Powerhouse Theatre in Waveny. Auditions should be submitted online by May 21. More information here. 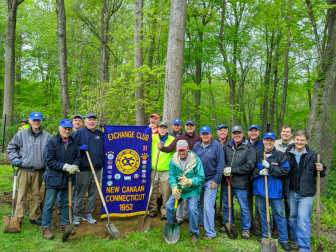 On May 8, the Exchange Club of New Canaan planted eight dogwood trees at the entrance to the Bristow Bird Sanctuary and Wildwood Preserve. Chris Schipper, chair of the New Canaan Conservation Commission and Friends of Bristow nonprofit group led members of the service organization. Exchange Club members said the assistance of Public Works Director Tiger Mann, Highway Superintendent Mose Saccary and their crew was critical to the project’s success.

The COVID-19 rate per 100,000 population in New Canaan for the most recent reporting period was 10.2, according to new data released by the state Department of Public Health. Darien’s is 6.9 while Ridgefield’s is 10.

Finally, police on Wednesday arrested a 29-year-old Nashua, N.H. man and charged him with first- and second-degree failure to appear as well as arrest without warrant. The second charge can be brought if there’s “reasonable information that the accused stands charged in the courts of a state with a crime punishable by death or imprisonment for a term exceeding one year,” according to Connecticut statute. In 2018, the man had been charged by New Canaan Police with illegal possession of a weapon in a motor vehicle, evading and several motor vehicle-related offenses. At about 1:12 a.m. Wednesday, an officer on patrol saw a car off the shoulder of Route 123 near the New York State line with the driver standing outside the vehicle, according to a police report. He asked if the man needed help and the man said he ran out of gas. On searching the man’s name, the officer found that state and Westport Police both had outstanding paperless re-arrest warrants issued for him. There also was an extraditable warrant out of Hillsborough County in New Hampshire. According a 2018 article published by The Telegraph online, the man had stolen thousands of dollars from New Hampshire businesses in a series of burglaries. He was held on  $509,000 bond as a fugitive from justice and scheduled to appear later Wednesday in state Superior Court.