Saying he wants to see through major projects such as installing cell towers and creating a new police station, First Selectman Kevin Moynihan confirmed Wednesday that he intends to seek a third term this fall. 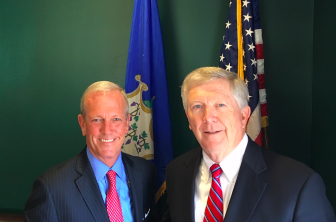 The Republican told NewCanaanite.com that “there are several things in the pipeline that it would be unfair for me to walk away from.”

“We are a very lucky town,” Moynihan said. “We’ve done a great job with COVID. We are very fortunate to have dedicated employees—they have made all that happen, and volunteers. We’ve weathered it well. Especially with the schools. The superintendent has done a brilliant job, very courageous job to keep the schools open. But there’s more to do. We’ve got to build this library. We’ve got to replace the Police Department or renovate the Police Department. So there are important things to get done. I’m not sure what the future holds in terms of future projects, but there is plenty to get done right now and I look forward to completing the agenda we set out four years ago to accomplish.”

Asked for his reasons for seeking a sixth term, Williams also referred to “unfinished business.”

“I believe as a town we have achieved meaningful and in some cases arguably historic accomplishments,” he said. “We have got not one but two cell phone towers in various stages of being put into play. We’ve made great strides in utilizing green technology including the expansion fo natural gas in town and the use of solar electricity. We have beautiful new playing fields, and an athletic foundation now that will in the future serve to support the maintenance of those fields. Most importantly, New Canaan despite the personal tragedies that many of us have faced—the loss of family and friends—ultimately I think New Canaan has a come through the pandemic as well as any town in America. And that is due to the incredibly hard work of a lot of people at Town Hall.”

Williams also ranked the new library as a must-do project.

“I see that as something that is really going to be a game-changer for the town,” he said. “It’s a fantastic project and I look forward to seeing that to its conclusion.”

He added, “We have continued to be very supportive of our school system, because I recognize—I think Kevin does, as well—that maintaining one of the best school systems not only in the state of Connecticut but in the entire United States, is critically important.”

It’s unclear whether Moynihan or Williams will face Republican challengers at the party’s caucus in July. No Democrats have yet announced their intention to seek the first selectman or selectmen seats in the general. Currently, the Board of Selectmen is composed of Moynihan, Williams and Democrat Kathleen Corbet.

Elected in 2017 by a 33-vote margin over Democrat Kit Devereaux, Moynihan had been a career attorney who served on the Town Council for four years prior to taking office. He defeated challenger Craig Donovan in 2019 by more than 1,000 votes. Williams also is a lawyer by profession.

Moynihan said that although “COVID slowed us a bit,” he still has “not accomplished everything I wanted to accomplish.”

“I just think two more years would give us the ability to get things done,” he said.

Asked about the downsides to the job, Moynihan said it “has its frustrations.”

“It’s not as though it’s overbearing, but there are frustrations and annoyances that you live with, and you might say ‘I’ve had enough of this.’ I haven’t gotten to that point. But I could see where showing up for meetings and trying to move things forward—things won’t happen in a town unless someone tries to move them forward. Even though we have great employees in town, and great managers, like [Public Works Director] Tiger [Mann], things tend to meander unless someone tries to crack and whip and say, ‘We’ve got to get this done.’ I think that’s the role of the first selectman and I think we do it well.”

Though many people will criticize a first selectman, Moynihan said “you just have to have a thick skin and say, ‘That comes with the territory.’ ”

“We don’t have a lot of problems,” he said. “Anything we want to do we can do in New Canaan. People are very happy in New Canaan. The schools are fabulous. I’m very lucky to be able to serve in a position where you can basically do whatever you want and do it right.”