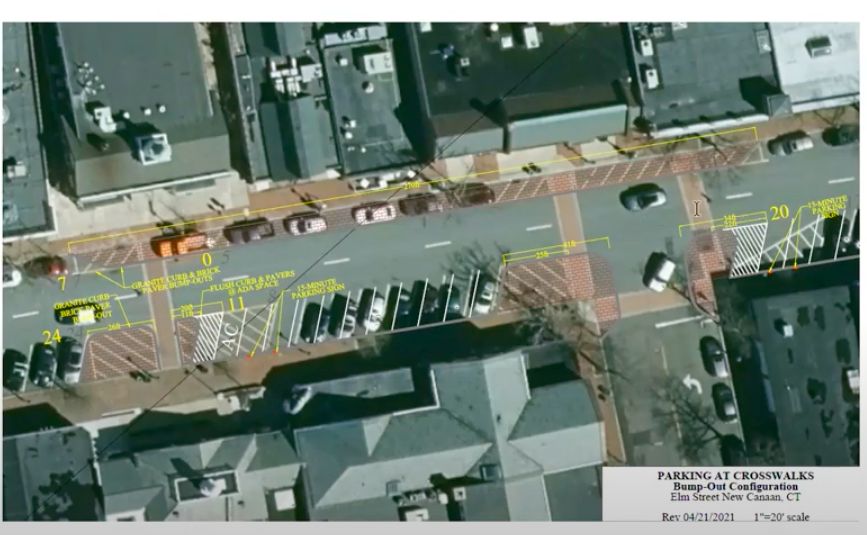 An updated version of the proposal to widen some sidewalks on Elm Street, presented at the April 2021 Police Commission meeting.

Town officials heard from business owners after a proposal to “bump out” some of the sidewalks on Elm between South Avenue and the Playhouse became known earlier this year, according to Public Works Director Tiger Mann.

The 15-minute parking limit “would allow for your quick drop in for either a quick cup of coffee or for a store, to get in for retail to pick something up you had ordered,” Mann told members of the Police Commission at their April 21 meeting, held via videoconference.

“And it would actually help a little bit with turnover on the street itself,” Mann said.

Two 15-minute spaces would be located on Elm just east of the intersection with South Avenue, in front of Dunkin Donuts and midblock between the Playhouse crosswalk and Park Street, he said.

The sidewalk widening on Elm Street would make permanent some of the new configurations put in place during the COVID-19 pandemic, designed to give restaurants more outdoor dining space. Updated plans call for a wider sidewalk on the north side of Elm from just below the eastern crosswalk at South Avenue (roughly in front of The Adirondack Store) up to the Playhouse, as well as on the southeastern corner of Elm and South and on either side of the midblock crosswalk near Dunkin Donuts. Because the plan leverages the difference in curb length needed for a parallel versus angled parking space, the changes will not yield a reduction in overall parking spaces on Elm (in fact, they likely will see one additional space created).

During the Police Commission meeting, Michael Galante, director of traffic at Norwalk-based Hardesty & Hanover LLC, said he had reviewed the plans and agrees with them. Galante said a traffic study of Elm Street showed that the 85th percentile of motorist travel at 13 mph below the intersection with South Avenue and 15 mph between South and Park.

Commissioners asked whether the bump-outs will be raised (they will be at the same six inches above street level as the existing sidewalks and will have a granite edge, except for one disabled spot at the mid-block crosswalk that will be flush with the street), how the project came about (pedestrian safety and an existing study related to improving cycling in New Canaan), whether low flower pots would be installed on the bump-outs for motorist visibility (it’s possible to have amenities including bike racks and enhanced seating), whether Elm Street has an existing pedestrian safety problem (motorists are still parking near crosswalks) and whether the bump-outs will come with bike paths (it’s not part of this project).

Commission Secretary Jim McLaughlin said the bump-outs at the intersection would appear to create a problem for motorists making left-hand turns from Elm onto South and vice versa where they’re “going to have to navigate around because they have a much more narrow road there.”

Mann responded that “that happens already” and the turn just becomes wider for those entering South Avenue from Elm Street.

“It’s not a double-turning lane,” he said. “It happens now.”

Chamber of Commerce Executive Director Laura Budd, a guest at the meeting, said many merchants have asked for 15-minute spaces on Elm “because they have customers who get frustrated that they can’t find a spot when they want to pick up or if they just want to pull up and have a merchant come out and bring them a package.”

“They are getting ticketed because there is no pedestrian loading zone,” Budd said.

She added that many of the businesses that saw pedestrian barriers installed out front due to the pandemic have enjoyed having the additional sidewalk space.

“I think we sort of had a dress rehearsal for this for the past year,” Budd said.

The Commission met Wednesday afternoon on Elm Street for a field review of the plan with Public Works, and is expected to vote on the proposal at its May 19 meeting.