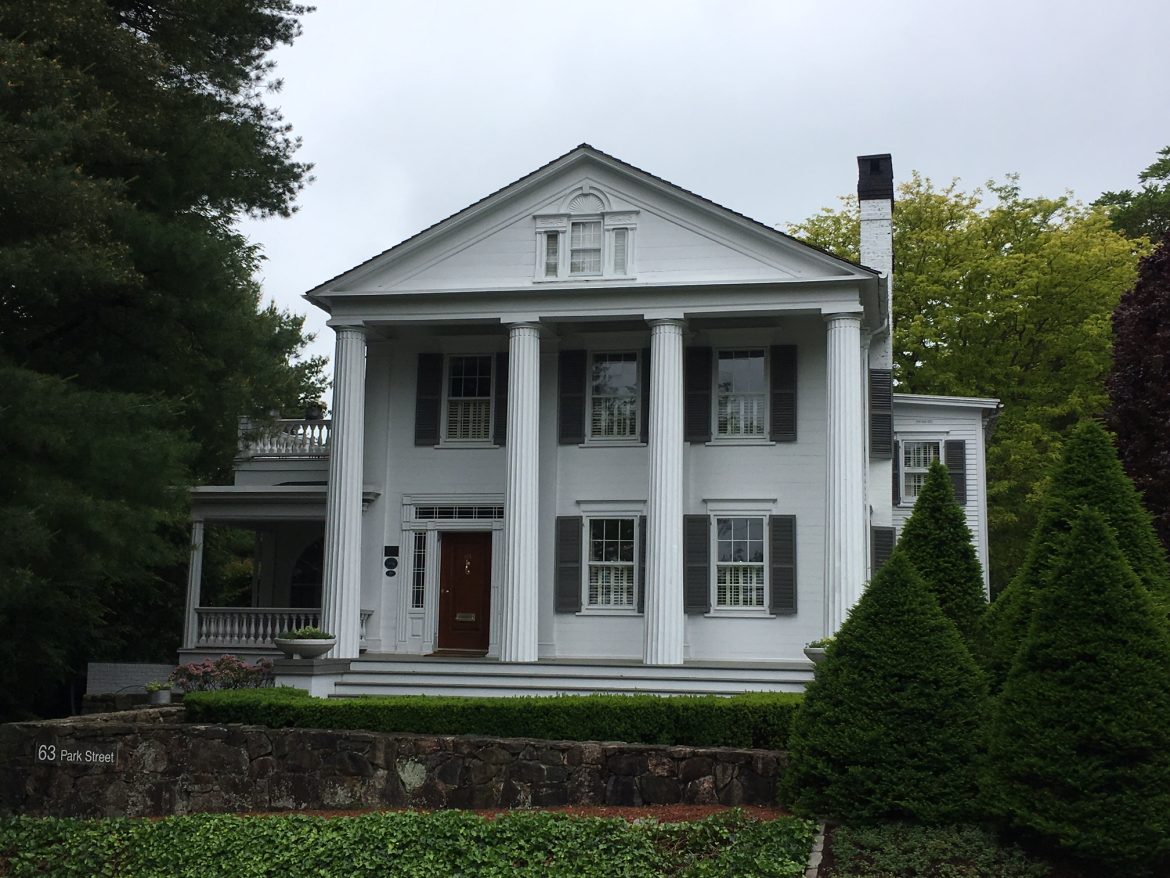 Once the home of the great Scribners editor Maxwell Perkins, the Greek Revival at 63 Park St. will house a philanthropic organization and feature exhibits and lectures, according to Wilton-based architect William Earls.

“It being so walkable in the center of town and also so close to the Historical Society—and also not only is the house itself so much part of that program but having, of course, the Glass House and Fred Noyes’s house and Grace Farms—all seemed to have this happy synergy with David’s intent there,” Earls told members of the Historic District Commission at their May 28 meeting, held via videoconference.

He referred to David Peterson, principal of the limited liability company that purchased the ca.-1836 house and its .33 acres for nearly $2.5 million in November 2018. The town in March received a building permit for an estimated $750,000 interior renovation on the structure. Because the project involves some exterior changes to parts of the building that are visible from the public street, the Commission’s approval also is required.

Much of the exterior work will affect the south side of the house, part of which is visible from Park Street, including a porch and Palladian window at the back of it. Plans that had already come into the Commission call for a new “tower”-like feature to accommodate an elevator inside and enclosing the level of the porch, and though no formal plans had yet been reviewed by the appointed body, Earls said he was contemplating a “jog” from the Park Street face of the home to the new construction “to more clearly distinguish old from new.”

Commissioner Carl Rothbart said he was glad to hear that, “because that is something that, seeing the drawings, was really a concern to me.”

“That you were just carrying this new facade flush with the front of the buildings straight across and currently you read the portico really as an object and then the rest of the building is set back from it,” Rothbart said. “And creating a continuous facade there that is visible from Park Street was really an issue for me so setting it back would be an improvement for sure.”

Peterson asked how the Commission would feel about a “more modern intervention” that included materials such as glass and steel in the new volume.

On hearing positive feedback, Peterson said he and Earls both had been “lukewarm” with the initial proposal, “beaus it really felt like compromise and it really is kind of vanilla and doesn’t say much.”

“It was kind of what is that old commercial, the Wendy’s commercial, ‘Where’s the beef?’ ” he said. “You wonder, where’s the beef here? That volume just kind of sits there. While it’s functional and purposeful, I view it and I think Bill views it as [an opportunity] to do something more distinguished.”

The Commission agreed to schedule a special meeting as early as required in order to review and approval the new plans.

Noyes, a guest at the meeting, said during the public comments period that the Park Street home, which most recently was owned by architect Richard Bergmann, “is actually a very important building in town.”

“It sets a tone for a lot of the town. So to have the sensitivity about what Bill and David are doing with it, your response to it is important,” he told the Commission.

The organization that is to be housed at the building is the Onera Foundation, Earls said.

According to its website, Onera’s “mission is to increase public awareness of historic preservation and America’s significant architecture.”

“The Foundation will conduct exhibitions and lectures at its New Canaan, Connecticut building and provide financial support through grants and other funding,” the website said. “The Foundation’s 1836 building is on both the National Register of Historic Places and the Literary Landmarks Register, while the gardens are included in the Archives of American Gardens at the Smithsonian Institution.”